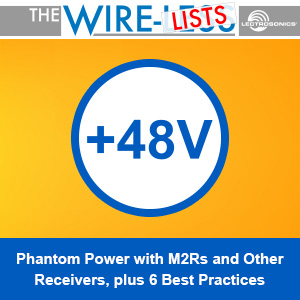 The M2R was designed originally as a personal listening receiver, often called an “IEM pack” (in-ear monitors) and thus, we used a very high-quality headphone amp for the design. The downside is there is no protection from 48V phantom power when the M2R is used as a camera hop receiver and is connected to professional microphone inputs. We have seen several M2Rs (and occasionally other receivers) come into repair with damage from this issue. This List will discuss what phantom power is, why it’s important, and how you should work with it to get the best results and avoid damaging your equipment.

What is phantom power and why is it important?

Phantom power, commonly designated as +48V or P48, is a way of sending DC current through an XLR cable and was designed to power these devices without using external power supplies. The power is sent through the same cable that is carrying the audio signal and leverages the multiple wires in a balanced-XLR cable to provide voltage to mics that need it (condenser mics, which have active electronics and require a voltage for polarizing the microphone’s transducer element) without affecting those that do not (dynamic mics). You can plug either type of mic into a mixer that provides phantom power and the condenser mic will use that power, while the dynamic mic will ignore it. That is why it’s called phantom – it lurks in the background for mics that need it, is invisible to those that do not.

When did phantom power become an issue with Lectrosonics equipment?

With some of our earlier generation receivers (specifically CR-series, which some of you might still use), the signal from the microphone was cut off until the phantom power was removed. Some customers didn't realize what was happening, thought their units were failing and needlessly sent them in. So, we modified our circuitry to add a resistive series into our receiver design to protect against capacitive discharge, along with resistive bleeders to ground to reduce peak voltages and non-polar capacitors for protection against miswiring. This works, although we do lose one or two output stages when outputs are wired to 110VAC.

Can phantom power ever damage my equipment?

As mentioned, although most of our equipment has since been redesigned to account for phantom power, it is important to know how phantom power may negatively affect microphones in older units (and this covers rental equipment or other scenarios you might encounter onsite) before you decide to use it. For example, some multi-channel preamps can only apply phantom power across multiple channels.

The situations that could potentially cause phantom power to damage a microphone include:

Phantom power is not just a microphone phenomenon! There are some other devices like preamps and direct boxes that require a small amount of power to function, hence the presence of phantom power. These devices can often be powered by batteries, but many of them are designed to function using phantom power. Here are six best practices when working with phantom power:

Working with phantom power on the M2R or any of our receivers shouldn’t be a mystery. Still have questions? This email address is being protected from spambots. You need JavaScript enabled to view it..