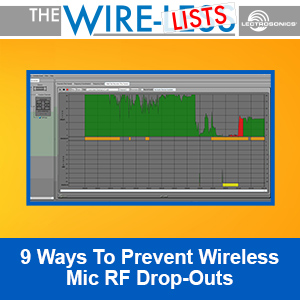 Every wireless mic system has two parts: a transmitter connected to a microphone or source and a receiver that picks up the transmitted signal. Both of them have antennas - one to put out the signal and one (or more) to receive it. The area between the antennas is where most drop-out issues occur.

Start by identifying what kind of drop-out you're dealing with:

a) RF drop-out can be seen on the RF Meter. The meter will drop as the drop-out occurs. With Wireless Designer or with a DSQD receiver, the 10 second RF history display can help with identifying which channel/s are experiencing RF dropouts.

c) Audio drop-out is your issue when you see a strong RF signal, and the Pilot Tone is present but audio is dropping out.

In all cases, especially when you suspect RF drop-out, the user should verify that there is no RF signal (or very little) with the transmitter off. RF interference can cause drop-outs that can impact RF reception.

If I'm reasonably sure that the problem is RF, what should I do?

Wireless RF drop-outs are most often caused by improper equipment installation, set-up or use. This graphic illustrates what Wireless Drop-out (in this example, on a VRM2) looks like on a Wireless Designer screen. You can see a few very quick drop-outs just prior to 45 seconds and a long drop out that begins just prior to 55 seconds. The squelch row shows a squelch condition as the RF metering dips, which is indicative of RF drop out.

You can save yourself a lot of time by taking the approach of Occamís Razor (i.e., the most obvious culprit is usually the problem) and confirming first that you donít have a defective cord, transmitter or receiver, or that you are not taxing the known limits of your system. If youíve already done that, consider:

Being mindful of the type of drop-out you have as well as these tips can help you diagnose and prevent drop-outs. And as always, if you need us, weíre here! Give us a call, or troubleshoot your issue with other Fanatics on our Facebook discussion page.