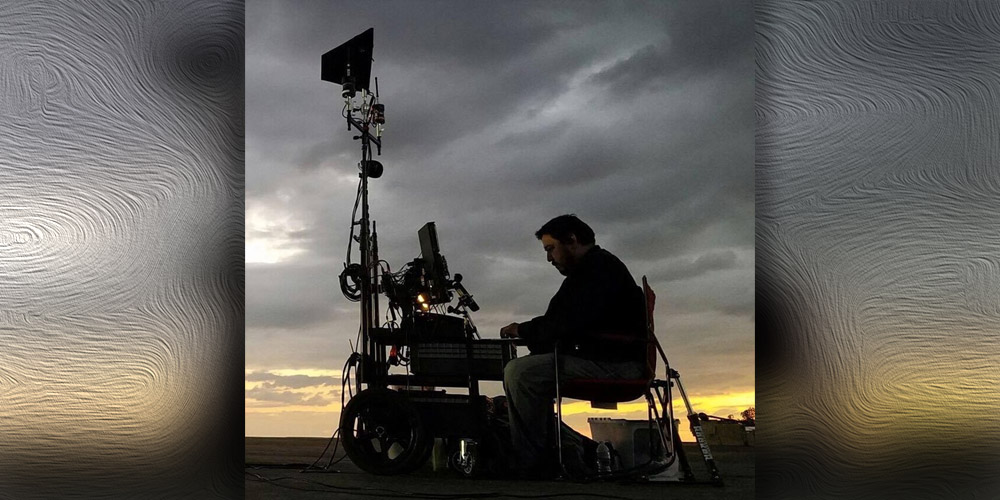 “With all the different sorts of shoots I get called for, it comes down to the reliability of my gear. Lectrosonics works the same every time so I can work differently every time.”

Los Angeles, CA (February 26, 2020) — One look at production sound mixer Chris Howland’s résumé, and it is evident that he is a seasoned veteran of films, TV series, and second-unit shoots of all kinds. Howland finds himself adapting on a near-daily basis to different locations, directors, crews, and talent. Recently, he manned the audio cart on shoots for the space epic Ad Astra, Jordan Peele’s horror masterpiece Us, and Dennis Villeneuve’s upcoming remake of Dune. To ensure that he can drop into any production on a moment’s notice and perform like he’s been there all along, Howland packs an arsenal of Lectrosonics Digital Hybrid Wireless® gear. The SMV and SMQV compact belt packs and SMWB wideband pack are his transmitters, and HMa plug-on units attach directly to microphones for boom work. Reception is handled by a trio of UCR411a receivers, plus a Venue system hosting VRT receiver modules.

“On any given production, once they settle into a certain way of doing things, they don’t like to change it,” says Howland. “So, when I’m hopping from show to show doing pickup work, my gear has to help me fit into their workflow with no delays or disruptions.” No matter the situation, Howland finds that Lectrosonics has a way of saving the day.

For example, its long-range performance literally made a scene in Destination Wedding, a romantic comedy starring Keanu Reeves and Winona Ryder. “The wedding of the title was set in a vineyard in Paso Robles, California,” Howland explains. “It’s beautiful there, so they wanted a lot of wide shots to establish a sense of place, which means you can’t use a boom for dialogue. We had only nine days to shoot the whole thing, so our goal was to let Keanu and Winona concentrate on their performance and not distract them. There was this one long walk-and-talk shot with Keanu and Winona on a pathway in the vineyard and the camera on a hilltop. Because we had to ride up this hill on a Gator ATV shared with two other departments, we didn’t have room for a boosted antenna rig; we were just running on whips. They’re walking towards us and they start as two specks maybe 150 yards away. I’d wired them both with the SMQV, which I chose because the output power can go up to a quarter-watt. Via the UCR411a, all the dialogue was captured without a single dropout.”

On a shoot for an upcoming Universal feature about a girl who befriends a unicorn, the SMWB wideband transmitter’s alter-ego as an SD card recorder rescued a pivotal sequence. “The shot was in RF-heavy Griffith Park in Los Angeles,” recalls Howland. “It was a tight schedule and we only got one take. Our heroine is a child actor riding her unicorn as the bad guy pursues her on horseback. They’re yelling at each other the whole time so I’m riding faders. For the dialogue shots, the talent were on mechanical horses mounted on a motorized trailer. There was no room for me on the trailer, so I was in a van in front, and for some reason they had to slow down and we unknowingly kept going and drove out of range. We also hit branches that messed with our antennas on top of the van. My tech Kelsey had the idea to double up with SMWBs in recorder mode on the actors. I was able to pull the audio files and deliver them to post, and everyone was happy.”

Users often praise Lectrosonics for sound fidelity that rivals a cabled connection. Particular aspects of this — dynamic range and transparent limiting — proved invaluable to Howland on the comedy Killing Hasselhoff. “Production was touch-and-go,” he says. “There were a lot of last-minute cameos from ’80s-era actors. One time, we got to a location that had just been rented, so we’d never seen it before, with pages we’d just been handed and talent we didn’t know was going to be there. There was a lot of ad-lib because most of these actors were comedians, and they’d whisper at each other one minute and scream the next. I was able to set levels that captured the detail of the whispering, but thanks to the quality of the limiters in the transmitters, there was none of that vacuum or pumping effect if the talent got loud. I’ll admit my hand was on the gain knob the whole time, but that’s the job — to capture the performance the way it happens. Lectrosonics certainly made that job easier that day.”

Lectrosonics is known for performing in harsh environments, and Howland’s horror story certainly belongs on the wall of fame: “On the last day of shooting a Nickelodeon kids’ show called Mutt & Stuff, there was a scene with a swimming pool. We get through the scene, and then the showrunner shouts to our host, ‘Say your last line and then jump in the water!’ The actor protested several times that he was miked, but the showrunner kept insisting it was fine, so he jumped in right with his SMQV on his ankle mount. Though I did lose signal at that moment, my tech opened the thing up, took a hair dryer to it, and within 30 minutes it powered on again! The production was gracious and replaced the transmitter, but the one that got soaked stayed in service another four years!”

“With all the different sorts of shoots I get called for, it comes down to the reliability of my gear,” Howland concludes. “. My Lectrosonics gear works the same every time so I can work differently every time. That’s how you keep getting called for more jobs.”