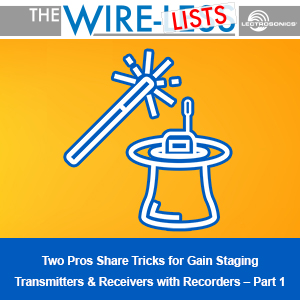 In our recent Facebook poll, many of you expressed interest in learning how to set up transmitter/receivers with recorders in an on-the-job scenario. We reached out to a few sound pros in the know, and this list is Part 1 of a multi-part series around how other users approach this exercise.

Bal is a UK-based Sound Recordist and long-time Lectrosonics user:

How he sets up receivers (SRB and SRC):

“Always set the receivers to line level (as that what Lectrosonics are natively) at +0dBu. I engage the tone on the receiver and set the level on the mixer so that the level is slightly over 0dBu.”

How he sets up his transmitters (SM ):

“The transmitters are a little hit and miss, but I will mic someone up and then ask them to speak as loud as possible. Generally, people feel a little shy and won’t give you their full volume, so I set the gain on the transmitter and then back it off a couple of notches. What I’m looking for is full modulation of the transmitter so both LEDs on the transmitter light up during normal conversation. When the person speaks at peak volume, I want to see both the -20 and -10 LEDs lighting up, with occasional -20 flickering red. I rarely have to alter the level as the limiters on the SM series are so robust. The settings on SMs and SRBs are the same for mixer and talent.”

“I’ve recently moved over to the DCHT for my hop duties. I take AES out of my mixer and straight into the DCHT. I use a M2R on cameras and they can be set in two ways. Most cameras will take an unbalanced line-level signal so the M2R volume level is set to 80 and limiter gain set to +15, with the threshold set to “off”.

For cameras that can only take mic level I set the M2R volume at 35 and limiter gain to zero, again with the threshold set to Off. For both types of cameras, I set my M2R volume taper to “Log”.

Now when using SM and SRB combo for hops, I do the following. I set my mixer output level to -10 (consumer line level). Set transmitter gain to 20-23 and set SRB to +5. That combo has always worked for me.”

Next up is Bruner Dyer, who has worked as a Sound Mixer and Engineer for reality TV and sports:

How he sets up receivers:

“From the receiver to the recorder, I set the analog output of the receiver at the highest line-level reference level (+05 in the case of Lectrosonics) going into the analog line-level input of the Sound Devices 833 (or any normal professional recorder).  This avoids having to reamplify the signal in the recorder that was already amplified in the mic preamp of the transmitter. The loud line-level signal,  as opposed to running the output of the receiver at the much lower mic level and using the mic level input of the recorder, will help my audio blow past any unwanted noise that may be amplified by the recorder’s mic preamp when having to reamplify the signal. When using an SL6, it works best at -6 on the output of the Lectrosonics receiver.  Once you have a rule, you have to be ready to break it.  Situations vary.”

How he sets up his transmitters:

“I amplify the microphone at the preamp in the transmitter.  Basically, I set the gain as high as I can, while avoiding hitting the limiter too hard, thus coloring the sound too much.  I have to plan for the loudest sounds I will encounter before I can practically adjust the gain again on the transmitter to meet a new situation.” Our Wire-List on Audio Gain goes into additional specifics of what Bruner mentions.

To his point about breaking rules, Bruner adds that he has a friend with a different approach to syncing the receiver to a Sound Devices recorder. “One friend runs his output gain at -12 on the receiver and uses the mic level input on the recorder.  He ends up running the gain pretty low on the Sound Devices to compensate for the hot signal coming in.  I think he can really crank up the gain this way.  It works for him. “

We’ll offer additional tips and different perspectives in Part 2 of this list.  Do you have approaches that have worked for you? Share them on our Facebook page or This email address is being protected from spambots. You need JavaScript enabled to view it..