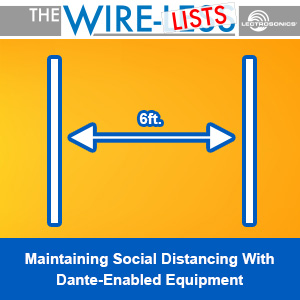 Preparation and monitoring are big parts of any production that involves sound, and all productions involve multiple pieces. Even in a wireless world, you are still having to place, adjust and touch every piece of that system: microphones, amplifiers, the mixing set-up. And now, having to do that while maintaining cleanliness and appropriate distancing just multiplied the hands-on portion of your entire crew’s jobs. Distance isn’t your friend when it comes to sound, because as you know, increasing the distance between your transmitter and receivers can create unwanted noise. These are all non-issues if you're using a Dante-enabled system!

What Is Dante? Four Reasons Why It's Awesome.

Developed by Audinate Pty. Ltd., Dante (an acronym for Digital Audio Network Through Ethernet) technology replaces both wireless and wired connections with a computer network that allows multiple signals to be conveyed through a single CAT5, CAT6 or fiber optic cable. The Dante software or hardware in a device segments digital audio signals and wraps them into IP packets that can be routed along a network, resulting in multi-channel, low-latency digital audio over ethernet.

All devices on the network can receive signals no matter where they are physically located. The routes and settings are saved within the Dante device, so no need to re-establish connections if one piece is moved or power cycled. Adding additional equipment to the network is as simple as adding them to an available network jack.

2) Very Easy To Deploy and Use

Signal routing and system configuration with Dante is fast, simple, and flexible with the free Dante Controller software. It automatically discovers each device on the network, enabling you to instantly route audio, label devices, and configure the network with a few mouse clicks.

Since there are no cable runs, the audio conveyed through Dante is free from quality degradation and network noise, with unnoticeable latency.

Since Dante is essentially a network, you can add as many channels as your interface and Ethernet switches can support. If you need additional capacity, you simply add additional interface devices and switches. The bandwidth used per port is minimal, while the channel capacity is huge. As an example, if you're running 64 channels in 24 bit on a gigabyte network, you will only use 1/8 of the bandwidth (74 megabits per second) on a port. So, you could conceivably run a minimum of 512 bidirectional audio channels at 24 bit/48kHz on a single port.

Lectrosonics presently offers a number of Dante-enabled products including two systems (transmitter and receivers with accessories). They can link to each other as well as to systems from other manufacturers, as long as those other devices are Dante-enabled:

Both the Duet and D-Squared Systems interface with our Wireless Designer software. Available for both Windows and Mac, Wireless Designer allows you to see and manage all of your connected devices, in addition to coordinate and recalculate frequency, without touching any of the individual components. We dive into tips and tricks for Wireless Designer in Wire List #9.

We also offer a series of Dante-networked audio processors to integrate digital and analog.

If you are new to Dante, you might find Audinate's White Paper, which we host on our Support site, which dives deeper into the technical considerations, useful.

Aaron “Cujo” Cooley and Scott Beatty, Lectrosonics users on the YouTube Atlanta Sound Guy channel, put together two videos on post-Covid production that you might find helpful in your own work:

Of course, you can always reach out to us at This email address is being protected from spambots. You need JavaScript enabled to view it. with specific questions.