Wire-Lists #22: 5 Steps To Getting The Most Out Of The Broadcast Loop 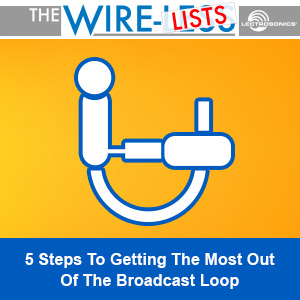 The next time you're watching the news or a live narrative-type program - pay attention to the person speaking. You might notice their lavaliere mic, but more importantly, how it is placed. Chances are, it has a loop in it, with the mic head pointing up or down. Called a "Broadcast Loop" or "Newsman's Loop," this technique and mic head placement is effective for specific scenarios and, when hiding the mic isn't the main priority, can fix some common audio problems.

Why Would We Use A Loop?

The most obvious reason why you might arrange a Broadcast Loop is for esthetics and ease of movement. A lavaliere cord draping down the talent's chest is visually distracting, and the cord can get caught on things as the talent moves about the set. The loop addresses this by making only the mic head and the loop visible to the camera/eye (the remainder of the cord would be hidden under clothing).
The more important technical reason as to why you would use one is to preserve sound quality. A lav mic on talent offers closer audio than a boom mic, but by the same token, lavs notoriously pick up every bit of sound around them, particularly crunchy rustles from clothing and skin contact. Any movement of the cord can result in noise traveling up the cord (which your techs will mistake for static/interference in your signal). The Broadcast Loop creates slack in the cable at the lav clip, so if the cable moves, the slack creates a vibration-diffusing buffer. The orientation of the mic head can improve your frequency response and the quality of the sound you capture.

5 Steps To Mic and Loop

Most lapel-worn mics have a jawed attachment that resembles a tie clip, and some models have accessory hooks to help you fashion a loop. If you're using our M150 or M152, for example, the C-150, will also hold the cable for you. 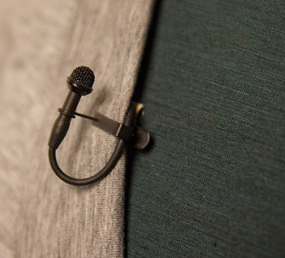 The Broadcast Loop is an old-school technique that can offer some tangible advantages when working with today’s highly sensitive audio equipment. Need additional pointers for your unique situation? Reach out to us by email or on our Facebook group.