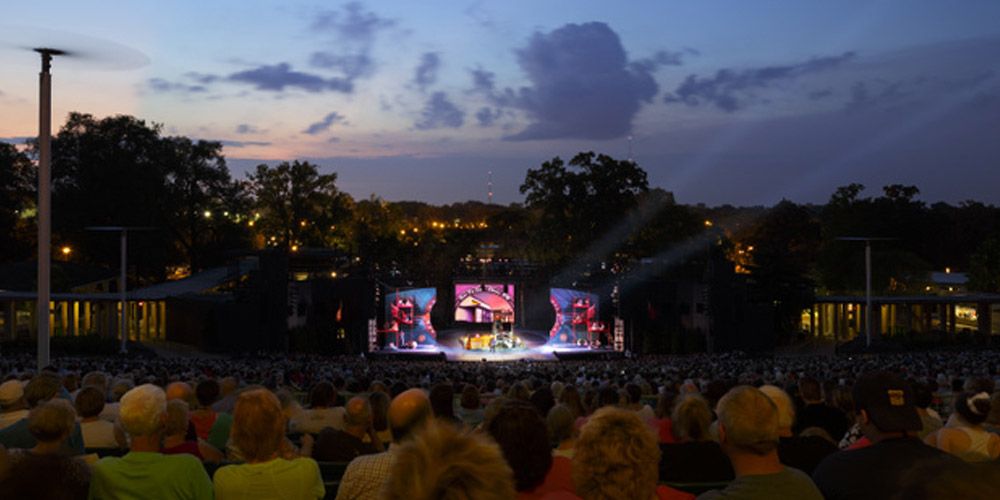 “We recently had experience with our first ‘all SSM’ show and we were very impressed with the audio quality, reliability, ease of operation and excellent battery life.”

St. Louis, MO (June 20, 2017) — After evaluating the Lectrosonics SSM micro belt pack transmitter when it was released in 2016, Tony Award winning sound designer John Shivers and Broadway audio mixer and sound designer David Patridge were so impressed that they vowed to specify it whenever possible. One year on, they are embarking on a summer of repertory at The Muny in St. Louis — the 99th season at the historic 11,000-seat outdoor venue —using an all-Lectrosonics Digital Hybrid wireless package comprised of 48 SSM super slight micro belt pack transmitters and eight Venue2 six-channel receivers, supplied by Masque Sound.

“The audio quality from the SSM is excellent. This transmitter has come out on top in our listening tests against other available wireless options,” says Patridge, who has worked for over 30 years in live sound for theatre, music and corporate events. His recent credits include Cirque du Soleil’s Paramour, worldwide productions of Mamma Mia!, Kinky Boots & Disney’s Tarza.

“We recently had experience with our first ‘all SSM’ show on Paramour in New York and we were very impressed with the audio quality, reliability, ease of operation and excellent battery life,” he adds. The reliability on Paramour has been particularly noteworthy, says Patridge. “We have seen zero failures of SSM or Venue2 over the course of using them from January 2016 through May 2017. Not a single pack needed to go back to the shop for service.”

The fact that the SSM is so small that it can be worn under a wig or strapped to an ankle and easily allows performers to be double-miked for redundancy is a bonus. “We don’t make sound design decisions based on the geometry of a piece of equipment, but certainly the small size of the SSM brings to the table a level of comfort for the performers who can avoid ‘lumps’ under the costumes — and it definitely pleases the costume and hair departments. Placing a transmitter in a hat or double-packing is much less of an issue than with other equipment,” he says.

“We have received a very positive response from an aesthetic and comfort standpoint and we like to think both the artists and the audience appreciate the quality of sound that we achieve on our shows. The SSM and Venue2 are very much a part of that moving forward,” adds Patridge.

This year’s summer season at the St. Louis Municipal Opera Theatre — commonly referred to as The Muny —runs from mid-June through mid-August and features seven productions in repertory: Jesus Christ Superstar, Disney’s The Little Mermaid, A Funny Thing Happened On The Way To The Forum, All Shook Up, The Unsinkable Molly Brown (a new show in development), A Chorus Line and Newsies. John Shivers is Co-Sound Designer along with longtime collaborator Patridge. Kevin Kennedy is Associate Sound Designer and Tracy Cowit is Assistant Sound Designer. Patridge and Lucas Indelicato are mixing the shows.

The Lectrosonics SSM transmitters are paired with DPA Microphones at the venue. “The Muny uses d:fine™ 4066 omnidirectional headset microphones, except in the case of the odd wireless musical instrument used on stage when we will either use a clip-on DPA 4061 or DPA 4099. If the instrument has a pickup, we’ll use a Masque Sound FET Head adaptor from the instrument to the SSM,” Patridge reports.

These days, he says, budgets are driving the market in theatrical sound design and, indeed, changing the nature of the entire business. “Musical theatre is high-risk and producers are always looking for new ways to mitigate that risk. The Muny is an important client for Masque Sound that we are fortunate enough to work with annually, from spring until mid-August. As Sound Designers, we really want to continue to innovate and to offer The Muny the best possible equipment for their season. Fortunately, Masque was willing to supply us with the Lectrosonics Wireless technology that we needed.”