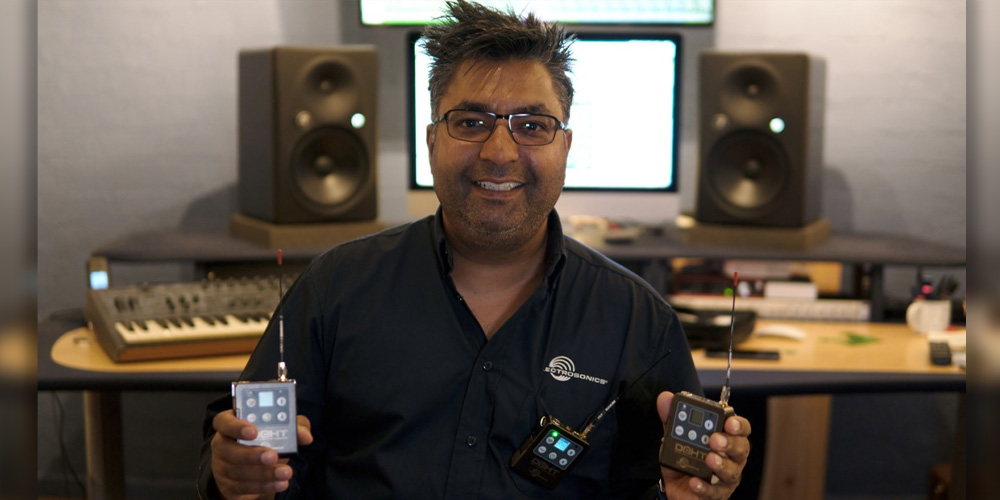 “If you want robustness, reliability, and pristine sound quality, you go with Lectrosonics.”

Rio Rancho, NM (May 28, 2019) — Recordist Bal Rayat is so accomplished in U.K. film and TV circles that he is often sought out by his first name alone — as in, “Can we get Bal?” A longtime user of Lectrosonics Digital Hybrid Wireless® systems, he recently needed to simplify the task of adding a “hop” to location audio setups. This consists of transmitting a two-channel mix of all the mics and sources from the main field recorder to the cameras, so everything can be recorded on various types of equipment. He found his ideal solution in the form of Lectrosonics’ DCHT digital camera hop transmitters paired with Duet M2R monitor/IFB receivers.

“Hops are crucial because many shows need a quick turnaround,” says Bal. “For example, I work on a BBC magazine show called The One Show. We might be filming all day and they’re broadcasting that evening. If the camera audio is good enough, they’ll just use it as opposed to all the tracks from my Sound Devices 633. The DHCT and M2R have certainly made for more occasions where that’s possible. Even where there’s more time for post, editors still want on-camera audio for logging purposes.”

With a great deal of wireless already in use on any production, Bal’s priority was reducing the number of frequencies adding hops often requires. “We’re running out of spectrum in the U.K.,” he reflects. “For a left-right mix on a three-camera shoot, we used to need two transmitters and two receivers per camera. That’s six extra radios! The DCHT solved a lot of problems here. The one unit in my bag takes a stereo feed from my mixer, VIA AES [as well as analog line-level], so I don’t have to worry about setting levels. Then, an M2R receiver on each camera picks up on the same frequency. Since the M2R was originally meant for in-ear monitors, it gives the camera stereo sound as well.”

The M2R’s diminutive size makes it well-suited to the compact cameras Bal increasingly encounters on shoots. “A show that I am working on called Inside the Factory uses Canon C300s, and a new documentary I just gave a quote to be shooting on a pair of DSLRs. I’ll put an M2R on each, both tuned to the DCHT in my bag, and boom — I’m done!”

In Bal’s workflow, the M2R does double duty for configuring IFB (interruptible fold-back or monitor mixes) with a large number of audio sources. “I did a show where we had, I think, 25 talent mics across three mixers,” he recalls. “This used to involve a lot of programming to ensure anyone who needed an IFB could hear what they needed to at any given moment. Now, the M2R is very clever in that it can store this thing called a Flex List, which includes the transmitting frequency. With a DHCT connected to each of those three mixers, I give them each a different name in the M2R. You can scroll through the names, and the corresponding mixer’s signal will show up in your headphones.”

In terms of performance under fire, Bal finds the DHCT-M2R combination lives up to Lectrosonics’ stalwart reputation. “We have a body in the U.K. called JFMG, which keeps track of and assigns radio frequencies according to geographical area. You can tune the M2R manually, but its automatic scanning is always in line with what they tell us is available. The range is also excellent. I’ve pushed it to about 100 meters — which is very good for digital — and that was just with the ‘stubby’ antennae that come in the box. I’m guessing I could get a lot more range using ‘shark fin’ antennas.”

Bal also recalls his first use of Lectrosonics gear, where it outperformed a far larger system on set. “A few years ago, I was working on a show called Scrapheap Challenge. The American equivalent would be Junkyard Wars. We had a huge system from a huge, famous A/V brand, with shark fins everywhere. I had invested in just two channels of Lectrosonics at the time and the crew was shocked that it sounded better than this huge bank of rack-mounted receivers. My investment in Lectrosonics gear was a no brainer.”

“In this industry reputation is everything and Lectrosonics have never let me down,” he adds. “The consensus is that if you want robustness, reliability, excellent customer support and pristine sound quality, go with Lectrosonics.”