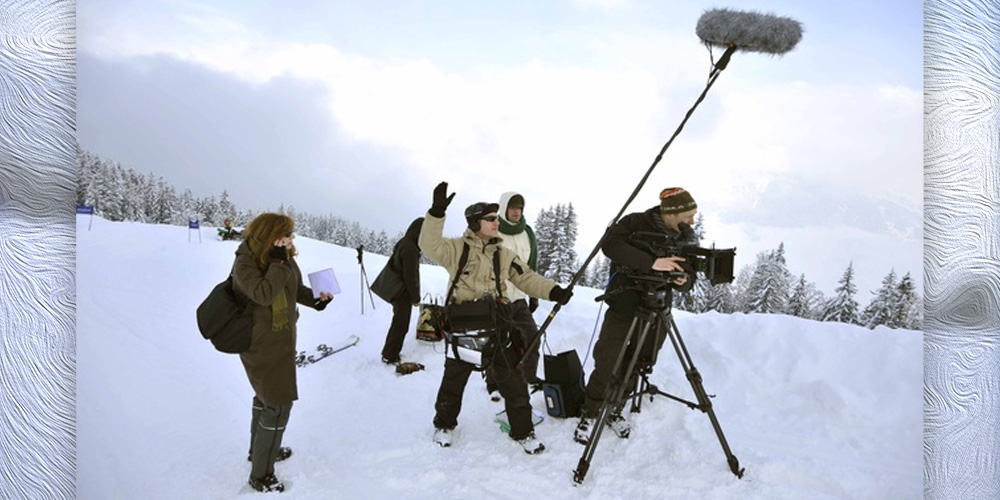 Shooting days have enough going on without the additional stress of having to fight or troubleshoot your gear. When I come home, I feel relaxed and accomplished because I know I can rely on Lectrosonics. There’s no better gear on the market.”

Zurich, CH (May 19, 2020) — All things Swiss, from the world’s finest watches to its most secure banks, are known for precision. Leading production audio engineer Raymond Anderegg applies this same perfectionism to his work on Switzerland’s biggest TV shows, feature films, and commercials — and insists on Lectrosonics wireless equipment exclusively. His cache includes three dual-channel SRC receivers and European-spec SMB and SMDB transmitters, as well as UCR411a receivers and wideband SMWB and SMDWB transmitter packs. Time-tested LT transmitter and LR receiver pairs are in use as comms and camera hops, as is the HMa plug-on transmitter for boom mic work.

One of Anderegg’s regular gigs is the biggest Swiss TV show, the reality hit Happy Day, which is broadcast on the nationwide network SRF. Under its tight production schedules, the reliability of Lectrosonics’ quick frequency scanning is key. “It’s a wonderful show where the producers find people who need help and then, you know, give them a happy day,” Anderegg explains. “For example, in one episode we remodeled the house of a young mother of two who’d recently been widowed. The technical issues are that we can have a lot of frequencies going at once for family members involved in the shoot, plus IFB, and we don’t have a lot of time to check frequency coordination manually. Just like in other places, we’re losing available spectrum here because it’s getting bought up by phone carriers and such.”

“I now do all the sound for this show,” he continues. “In the past, other companies who worked this show booked me as a freelancer, and I had to use their wireless equipment. I was always troubleshooting intermodulation and crosstalk. Since I switched us to Lectrosonics a few years ago, we’ve never had any such problems. Friends of mine who I’ve worked with a long time, like camera operators and DPs, have also commented on the improvement of the audio quality. Human voices sound more natural and organic. And, if I have to subcontract an episode because, I’m out working on a feature film for example; I always insist that the subcontractor use Lectrosonics. I’m even happy to lend my own gear to up-and-coming freelancers I hire, to ensure the quality of the end product. There are other brands out there with names just as well-known, and there are still other brands out there which might be less expense, but Lectrosonics is the superior choice for a professional system

Just as important to Anderegg is range, an area in which he finds Lectrosonics excels. “There was one shoot we did with a team of rock climbers scaling a hydro-electric dam,” he recalls. “It’s on one side of this little valley and to get the shot we wanted, we had to be on the other side. With the output power of the climbers’ SMQV transmitters set at 250 milliwatts, we had absolutely no problems getting their dialogue. While it does cost a bit of battery life, and you need a special permit to transmit at that power in our country, it worked great!”

For less extreme applications where the distance between transmitter and receiver can still vary greatly, Anderegg uses the 100-milliwatt setting of the Lectrosonics LT transmitter, again with a special permit.

“The makeup company Maybelline is one of my clients, and we did a series of commercials where women are applying makeup while riding in a taxi. There’s a camera person in the front seat, but the audio crew is in another car in front. For this, the LT-LR combination worked perfectly. Sometimes our car and the taxi would be 100 meters away and we never had a dropout.”

In the rare event that equipment ever needs repair or replacement, Anderegg has high praise for Lectrosonics’ customer service. “Even though Lectrosonics is all the way in the U.S., their distributor here, Audio Bauer, has been stellar about working with the home office to get things turned around quickly.”

All this adds up to a confidence that Anderegg says improves not only his professional performance but his personal wellness. “Shooting days have enough going on without the additional stress of having to fight or troubleshoot your gear. When you come home after a day like that, you’re wiped out and irritable,” he remarks. When I come home, I feel relaxed and accomplished because I know I can rely on Lectrosonics. There’s no better gear on the market.”