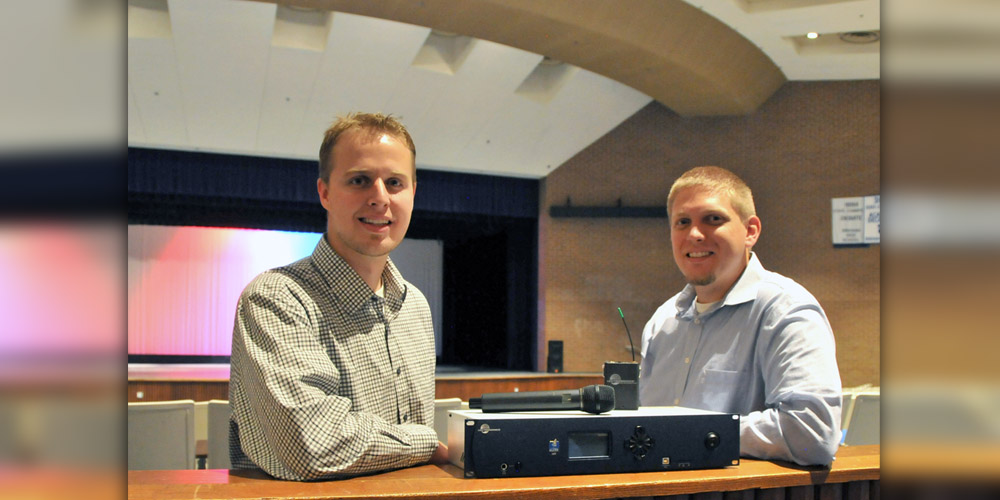 South Jordan, UT – August, 2014… As many business professionals, educators, and others are discovering, automated mixing control and wireless microphones simplify and improve the sound reinforcement capabilities in many different environments. Such is the case at Bingham High School, where the school’s auditorium underwent a substantial facility upgrade in order to improve its sound reinforcement capabilities. Here, Digital Hybrid Wireless® microphone and Aspen audio processing technologies from Rio Ranch, NM-based Lectrosonics were placed into service.

Salt Lake City, UT-based BNA Consulting, Inc., a major provider of electrical consulting services in Utah and surrounding states, was contracted to design the school’s new sound reinforcement system and upgrade the facility from an aging analog setup to one with digital capabilities. Working in conjunction with Performance Audio of Salt Lake City, who served as the integrator on the job, the project culminated with a system that facilitates control via an Apple iPad tablet. BNA Consulting’s Jaime Verhaal, CTS-D and Drayton Bailey, CTS-D served as the AV consultants. Verhaal discussed the nature of the project.

“The Auditorium at Bingham High School seats around 2000 people and is used for many types of activities ranging from school musicals to public events,” Verhaal explained. “The goal was to develop a system that could be used with a digital mixing console for larger events, yet also have the ability to function in an unattended mode—particularly when the auditorium is rented.”

Verhaal’s first goal was to improve the microphone capabilities in the room. This was accomplished with a 12-channel system comprised of two Lectrosonics Venue wireless microphone receiver mainframes, each fully stocked with the company’s VRS receiver modules. For system input, Verhaal specified eight Lectrosonics LMa Digital Hybrid Wireless beltpack transmitters plus four handheld microphones. “It’s great that we can fit six wireless channels in the 1 RU Venue receiver housing,” says Verhaal. “We replaced an old wireless microphone system that was experiencing dropouts and was just plain worn out. With the new Lectrosonics system, we now have twelve dependable wireless channels—all housed in two rack spaces.”

The audio management system Verhaal specified includes a Lectrosonics Aspen SPN2412 24 input / 12 output audio processor and an Aspen SPNDNT (Dante™) interface that connects Dante™ networked audio with ASPEN processors. “For this installation,” Varhaal reports, “We have the Aspen SPN2412 set up to handle automixing when the space is rented and output Dante to a digital mixing console when in manual mixing mode, using a rocker switch positioned near the console. With the iPad control that we implemented—combined with the processing power of the SPN2412—the school now has a system that makes it easy to operate and make changes when necessary for unattended operation while having full control via the mixing console for larger, more involved events.”

For a project of this complexity, questions invariably arise and, here too, Verhaal was impressed with Lectrosonics’ customer and technical support services. “Lectrosonics’ support has been incredible,” he said. “Scott Woolley, our local representative went above and beyond with support on this effort. During the consultation phase, Scott helped us obtain the equipment necessary to demonstrate a wireless bodypack system and the school’s preforming arts group loved it. They couldn’t believe how well it worked.”

Bingham High School’s revitalized sound reinforcement system was installed during the early part of May and, since that time, has been steadily in service—impressing everyone who comes in contact with the equipment. “The school loves the new system,” Verhaal said. “Upgrading the wireless microphone equipment has given them more channels of reliable wireless microphones then they had previously and by adding wireless/remote control of the mixing console and DSP with an iPad app, the entire setup is better sounding, more intuitive, and flexible. I really like how the Aspen system preforms in this design. With the Dante network and local sources at the rack, it really simplifies everything for the user.”

To learn more about BNA Consulting, Inc., visit the company online at www.bnaconsulting.com.