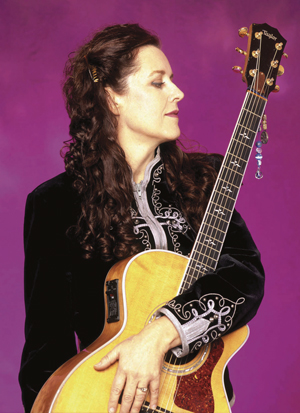 NEW YORK, NEW YORK: Earlier this year, songwriter, and motivational speaker Jana Stanfield was backstage at New York City's renowned Carnegie Hall, preparing for her gig as an opener for guitarist Mike Rayburn, widely known as 'the World's Funniest Guitar Virtuoso.' While unpacking the few pieces of live audio gear she travels with - dual Lectrosonics UR100 and UM100 UHF belt-pack receiver/transmitter wireless systems - she once again heard familiar praises directed towards her wireless systems of choice.

"The sound technician at Carnegie Hall said, 'Lectrosonics? I love this gear!'" recalls Stanfield. "He said, 'This is great wireless equipment,' then shows it to another technician, saying, 'This is what they use in the movies.' Cool, huh?"

Stanfield and her company, Keynote Concerts, provide music-based motivational events - "concerts with a message, "- and have built quite a successful business in doing so. Rayburn, who calls his show 'Classically Trained... Comically Derailed,' is a deft, tasteful guitar player with a quick, witty tongue. Together, the duo graced the stage of Carnegie's Zankel Hall via their individual mettles of music, humor, and stirring messages.

"I heard from Bill and other speakers that Lectrosonics was the best, and I bought the systems from him," Stanfield explains. "I use a flesh-colored Countryman ISOMAX Stealth earset microphone with a wireless pack for my voice and a wireless pack for my guitar, which I wear on my guitar strap. I think the best thing about the Lectrosonics gear is its 'dropability.' I've tested them on concrete and marble floors around the world, and played with this system in countries including Australia, Thailand, New Zealand, Bali, and Canada. So far, I've dropped it in three-fourths of those countries."

Rayburn, who was encouraged to purchase the same Lectrosonics wireless systems by an elated Stanfield, cites several reasons why switching to the UR100/UM100 gear was such an important decision. "First of all," he begins, " It's hard to get something that sounds good and is small enough to travel with. I'm in a different place each night, so it has to be durable. It's reliable, sounds great, and I've never had anything to go wrong with my transmitters and I've had them for three years."

According to Stanfield, a performer working in the realm of motivational speaking almost requires having a wireless system like her Lectrosonics rig. "If I'm going to the other side of the world to perform, I can only take two bags," she explains. "One is my Calton guitar case, which I check on an international flight. The other bag holds everything else I need for the trip - clothes, shoes, a few CDs, and my two wireless systems, all of which has to be under 50 lbs. This gear is so small that it hardly takes up any room and adds virtually no weight."

Finally, an all-battery operation combined with impeccable build quality make the UM100 a no-brainer for Carnegie Hall-worthy artists such as Stanfield and Rayburn. "I don't have to worry about plugging it in while in different countries," explains Stanfield with a sense of relief. "And finally, I know that if someone says to me, 'We're having a problem with your sound,' I know it's not my wireless. I can say to them, 'I use this equipment all around the world, and I never - ever - have a problem with it."

Often, illustrates Rayburn, a motivational speaker doesn't know what to expect of their next performance venue. Because of that, arriving with a fail-proof wireless system goes a long way to reducing audio-induced headaches. "Every night is a different system," Rayburn explains. "One minute you have a professional sound company and an arena system, the next you're in a hotel meeting room with a small Mackie mixer and a couple of JBL speakers. What you want to do in those situations, as simply as possible, is limit the variables. If you have something you can really count on, like the Lectrosonics systems, it just makes life easier."