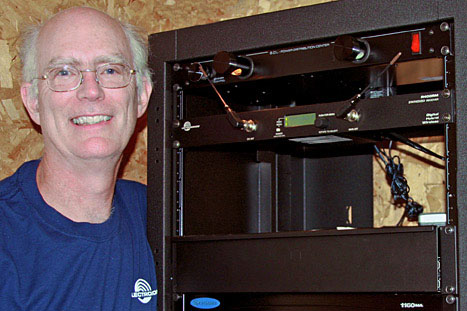 Seattle, WA – August 2009… Be it a wedding ceremony or one of many other important moments in our lives, the ability to hear clearly is critical. Such was the challenge at an upscale tennis club in the Seattle area, whose lushly landscaped gardens make the perfect setting for exchanging vows. Home to the one of the most prestigious tennis tournaments in Washington state—the tennis club sits on roughly 8 acres and offers its 3,000-plus members 19 tennis courts, several dining rooms, banquet facilities, and numerous additional amenities. With the summer season just kicking into high gear, club management wanted to ensure the best possible sound quality for its outdoor speaking events. They found their solution with a wireless microphone system from Lectrosonics.

AVL Professional, a Seattle, WA-based design/build firm that specializes in AV systems integration, was contracted to implement the club’s wireless microphone system. According to Larz Nefzger, Systems Consultant for AVL Professional and the company’s system designer for all things audio-related, the most pressing issue in implementing a wireless microphone setup was that of range and sound clarity.

“For this project,” states Nefzger, “the receiver was to be housed in a maintenance shed more than 100 feet from the lawn area where events are staged. Being that a wedding is one of the most important events in a person’s life, it was imperative that any wireless system we installed have the broadcast power and reliability to ensure these events went off without a hitch. This particular tennis club is a very upscale venue and the club’s patrons are accustomed to the best of everything. Hence, dropout-free performance and natural sound quality that yields a high level of speech intelligibility were of paramount importance.”

After evaluating a number of options, Nefzger ultimately decided to deploy a Lectrosonics wireless system consisting of a UM450 beltpack transmitter, an R400A diversity receiver, and an M140-5P lavaliere style cardioid microphone. Both the transmitter and receiver utilize Lectrosonics’ highly acclaimed Digital Hybrid Wireless® technology, which uses a proprietary algorithm to encode 24-bit digital audio information with no compression and low distortion into an analog format that can be transmitted in a robust manner over an analog FM wireless link. The result is much higher dynamic range—free from sonic artifacts— than wireless systems using a compandor are able to offer. Digital Hybrid Wireless technology delivers long operating range, graceful signal decay, and a small spectral footprint, facilitating more channels to be operated simultaneously.

When queried about those features and characteristics that resulted in the selection of the Lectrosonics equipment, Nefzger offered this assessment, “We were particularly impressed with the range and sound quality of the system,” explained Nefzger. “Not once have we experienced even the slightest dropout with this system and people sound very natural when speaking. We haven’t encountered any of the compressed, unnatural vocal quality that occurs with lesser wireless microphones. Further, the build quality of this system is very impressive and Lectrosonics’ reputation for reliability certainly figured into the equation.”

Nefzger was equally complimentary of Lectrosonics’ customer and technical support services. “We had one or two operational questions as we were configuring the system,” states Nefzger, “and I was very impressed with Lectrosonics’ tech support group. I love the fact that when I call the company, I get a human on the phone very quickly! Even more impressive is the fact that the technicians understand my concerns and are able to promptly and accurately assist me.”

The Lectrosonics wireless system was deployed in March 2009 and is now seeing regular use. Considering its relatively short period in operation, Nefzger has already received a steady string of compliments. “Club management is absolutely ecstatic with the new system’s performance,” reports Nefzger. “Better yet, they’ve contacted us with a request for additional wireless channels—and let’s face it; repeat business is the best compliment of all.”