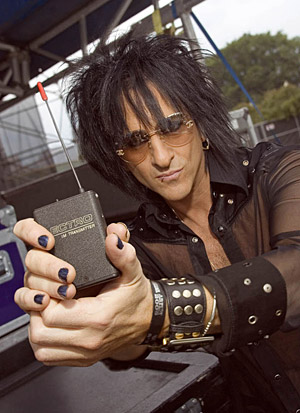 RIO RANCHO, NEW MEXICO: Lectrosonics introduced the IS400 Digital Hybrid Wireless™ Instrument System only a few months ago and it's already a hit with Steve Stevens. The renowned guitarist, who has been performing and writing with Billy Idol for all but a few of the last 23 years, is currently mid-tour promoting the singer's new album, "Devil's Playground," the first album of new material from Idol and Stevens together in over 12 years.

Designed for use with both electric and acoustic instruments, the Lectrosonics IS400, consisting of the IM transmitter and R400A receiver, utilizes a proprietary digital algorithm to encode the audio signal into an analog format for transmission over an FM wireless carrier, which is then converted back into digital audio via DSP at the receiver. According to Stevens' guitar tech, Tim Kennedy, it was about time. "We've been waiting for years for something like this to appear," he says.

Having researched the options online, Stevens had Kennedy contact Karl Winkler, director of business development at Lectrosonics. "Karl came to our show in Albuquerque with a brand new unit for us to try out. Steve plugged into it, played a couple of chords through it, and then I plugged him into a cable to hear the difference. It was really, really close to the sound of the cable. Steve said, that's it, it's the best one I've ever heard."

Kennedy continues, "It's as close to a straight wire that we've been able to find. My ears aren't the greatest from years of abuse but even I could tell the difference! And Steve's still over the moon about it."

The design of the IS400 effectively eliminates the need for an analog compander circuit and provides superior audio dynamic and frequency response when compared to analog systems. Kennedy confirms, "It has an overall great sound, a nice warmth to it, and an all-around full sound, as you'd get from a cable."

Setup could not be easier, according to Kennedy. "It's very user friendly from a tech aspect. One cool feature is SmartTune™. It basically scans the frequencies and finds the best frequency at that location. Even if the frequency you used the night before comes up, it may not be the cleanest frequency available at the moment."

Performance and reliability have also been rock solid, he observes. "We haven't had any issues with the RF side. From a small club stage to a festival stage with 50,000 people, we haven't had any signal loss, no dropout and no compromise to the sound. Lectrosonics did their homework and built a great product."

It has been completely trouble free, according to Kennedy. "We've been using it for about two months and, other than operator error, have not had any problems with it. Any issues I have had, the people at Lectrosonics have been great and taken care of us right away. It really is a great product. And a little known secret, but within the year it'll be the hot little kid in the neighborhood."

Idol and Stevens have been busy promoting the new release all over Europe and are currently performing throughout the U.S., including the Lollapalooza Festival in Chicago, and dates across Canada. "It's a good show, and for the most part we're selling out everywhere we go," Kennedy shares. "We're also doing some dates on the Warped Tour and showing the little punk skater kids how it's supposed to be done!"