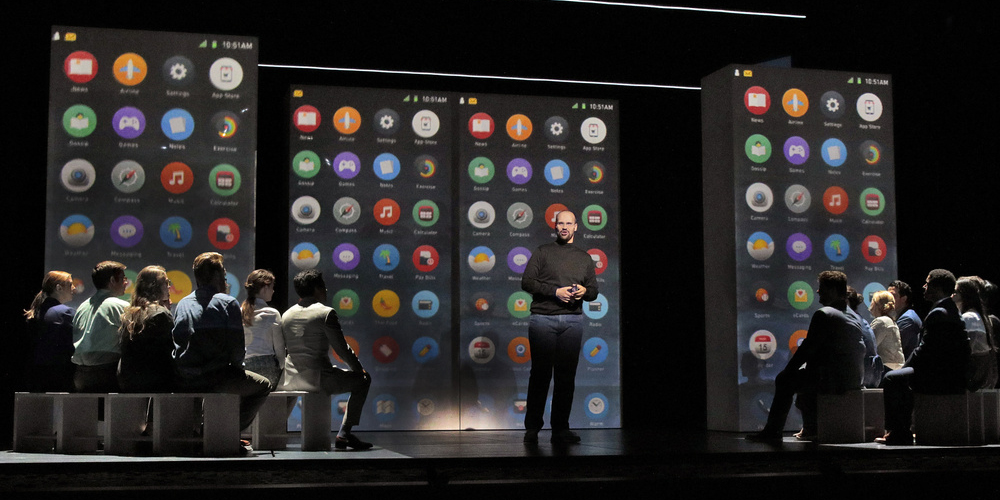 Santa Fe, NM (September 6, 2017) — Soundmirror, a Massachusetts-based classical music recording and production company, recently recorded Santa Fe Opera’s world premiere production of Mason Bates and Mark Campbell’s The (R)evolution of Steve Jobs for release on the Pentatone label. Like many of the productions that the company undertakes, this new live recording was captured using Lectrosonics Digital Hybrid Wireless® technology, including LT and SMQV transmitters as well as Venue and Venue2 wireless receivers.

“We used 28 channels of Lectrosonics wireless equipment,” says John Newton, who founded Soundmirror in 1972. “In the case of the principals, who were all double-miked, the transmitters were an LT and an SMQV on each of them. The choir was mostly LTs but also some SMQV transmitters. The microphones in all of those cases were DPA Microphones 4071 lavaliers.” Soundmirror also employed four Lectrosonics Venue2 receivers fitted with six VRT2 modules plus a pair of six-channel Venue receivers fitted with VRT tracking filtered modules for the 28 Lectrosonics wireless channels.

“One Horus lives in the rack with all of the Lectro wireless gear. It puts all of the wireless channels onto our RAVENNA network,” says Newton.

“It was a big orchestra in the pit, which we miked as we would any orchestra of that size,” he continues. “We had a row of hanging microphones over the edge of the stage and two rows of mics in the footlights, pairs of shotguns and wide cardioids in five sets. There were some places where we needed a bit more help, and that’s where the Lectrosonics wireless channels came in.”

Newton notes that The (R)evolution of Steve Jobs differed in one important way from any of the other operas that SoundMirror has worked on. “The voices were all lightly amplified,” he explains. “The composer, Mason Bates, is well-known for using electronic components. In this case there was an electric guitar in the pit as another orchestral instrument. Mason also created some sounds that he played using a keyboard. The guitar and those sounds were amplified, as were the singers and choristers. This kind of sound design is unusual for an opera.”

Adding to the challenge of any production of this size and complexity was the fact that the opera was presented in repertory with several others. “We had to set up and tear down the entire system for every production. We set up all the Lectro wireless equipment on a platform with wheels, so we could disconnect the antennas and the network cable and roll it away. Then it got set up for each show in synch with the pit and the stage being set,” says Newton.

“We have used Lectrosonics products so much over the years that we know that the reliability and ease of use is there,” adds Newton. “Sound Mirror is known for being an innovator, and our clients want the very best.”

And as microphone operators are having to begin vacating the 600 MHz band nationwide as wireless carriers begin to implement their new services following the recent Incentive Auction, Newton happily reports, “Our equipment is not in the 600 band. But there will be more competition for UHF frequencies in the future. Luckily, the technical people at Lectrosonics will fix all of those problems as soon as they crop up!” he laughs. “That’s what’s so good about working with Lectrosonics. They are ahead of the game and they have great solutions.”

In the role of Steve Jobs was baritone Edward Parks, joined by mezzo-soprano Sasha Cooke as his wife Laurene Powell Jobs, who plays a pivotal role in revealing his emotional, human side. Bass Wei Wu performed as Jobs’ spiritual advisor, Kôbun Chino Otogawa; tenor Garrett Sorenson as Woz, his friend and business partner; and baritone; Kelly Markgraf sang the role of his father, Paul Jobs; and soprano Jessica Jones sang the role of Chrisann Brennan. Leading the production were conductors Michael Christie and Robert Tweten.

The production was captured over the course of multiple shows during its premiere run at Santa Fe Opera’s open-air venue in New Mexico for release in summer 2018 on Pentatone. The Dutch classical music label specializes in high-end, multichannel surround-sound recordings and The (R)evolution of Steve Jobs will be released as part of Pentatone’s American Opera Series.

Soundmirror’s orchestral, solo, opera and chamber recordings have received over 80 Grammy Award nominations, with the company’s staff collectively winning 25 Grammys. John Newton has won seven Grammy Awards, Blanton Alspaugh is a four-time Grammy Award-winner, including one for Producer of the Year, Classical in 2012, and Mark Donahue has five Grammy Awards to his credit.