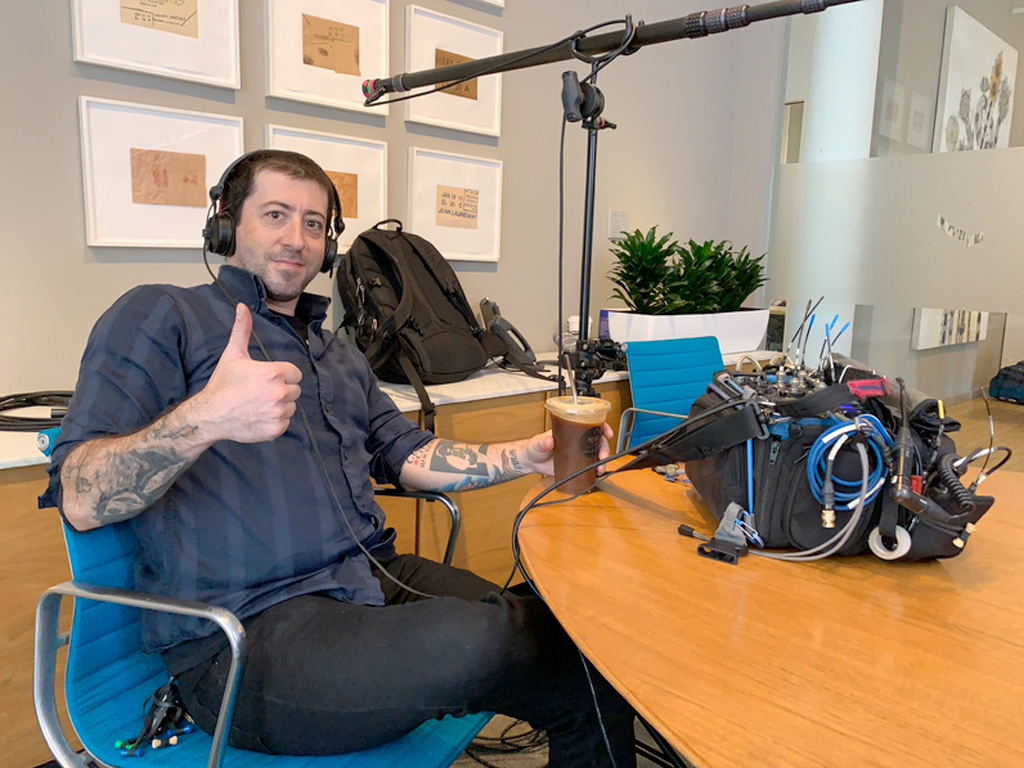 “You hold a pack in your hand, and you can feel the quality of materials and workmanship right away.”

New York City (October 4, 2022) — Over the past 15 years, Michael Solomon has built an impressive résumé of credits with a focus on reality and documentary TV, working on productions for almost every major cable and streaming outlet. Highlights include The Fourth Estate on Showtime, Cake Boss on TLC, House of Z on Netflix, Dance Moms on Lifetime, Shark Week 2018: Jimmy Buffett on Discovery, The Sky at Night on the BBC, award-winning news magazine Frontline on PBS, and the recently released Showtime documentary, McEnroe. Throughout it all, he has used Lectrosonics Digital Hybrid Wireless exclusively. His rig includes nine UCR411a receivers and seven SMQV transmitters, complemented by UM400a transmitters and five R1A receivers for IFB monitoring.

“I grew up in the punk scene on Long Island, but I never subscribed to the punk ethos of ‘live for today because you’re going to die at 25,’” he begins. “So, I knew I wanted a career, but that I didn’t want to work a 9-to-5 and wear a suit. I majored in media studies and after I graduated, I managed to land job at a production services company in SoHo in 2005. This was back when if you wanted to shoot in the U.S. and you were from Europe, you needed a camera that shot in the PAL video format. That was what we specialized in. I was the assistant equipment manager. Like a lot of people, I thought I wanted to be a camera operator. The owner said, ‘Learn audio first. That way, your knowledge is well-rounded when you move up to camera.’ I thought, okay. I started learning audio and I became their in-house sound guy.

“By 2008 I was looking for a new gig and had a pretty good résumé — I’d worked with Jack Black, George Clooney, David Frost — not bad for a 25-year-old,” Solomon continues. “I emailed every production company I could find and got three or four responses. One was from LeftField Pictures, and I found myself working on As the World Turns. I was with them through their final episode.”

By then it was time for Solomon to begin acquiring his own gear, and even on his then-limited budget, he reached for what he describes as the good stuff. “This guy Rick Johnson was instrumental in my learning about gear,” he says. “I bought two Lectrosonics receivers off him — I think they were 200-series and I forget the model of the transmitters, but they were Lectro as well. I bought a Wendt X5 mixer, which I still own, a boom pole, and a MKH60 mic and windscreen. I didn’t have a recorder because back then a lot of crews recorded straight into the camera. So, now I had a basic kit of my own and slowly started working for myself. Even back then, I knew Lectro was the only pro-level game in town for wireless. There were and are other brands, but they’re more prosumer.”

For Solomon, Lectrosonics is what he uses, and the reason comes down to reliability. “My gear has been all over the world. It’s been dropped, it’s been sweated on,” he notes. “You hold a pack in your hand, and you can feel the quality of materials and workmanship right away. That’s why I use the R1a’s for IFB — sooner a later a producer is going to drop something, and it’ll probably be one of my receivers, but every time, I’ve picked them up and they keep working. Besides reblocking a couple of channels currently because the FCC keeps squeezing the available RF spectrum in New York City, I’ve only ever had to send one unit back to the factory. This was because I put it inside a woman’s dress, with the display facing her body, no protection around the pack, and the sweat made it into the transmitter. Other than that, in my entire 15-year career, I have not had to replace any of my Lectrosonics and I have not had any of it go down. This probably isn’t ideal for their marketing needs, but I haven’t even had to buy any new stuff since 2013!”

That lengthy residency in his audio bag speaks to his preference for the UCR411a receiver in particular. “They’re always rock solid, even in New York City with all the RF floating around,” explains Solomon. “In a bag application, the 411s simply grab and hold onto frequencies like nothing else.”

Solomon offers two pieces of advice for aspiring mixers starting with a limited budget. “I won’t name names but you’re going to be tempted to buy wireless that’s $600 a channel, maybe so you can start out with more channels,” he says. “Don’t do it. Go on eBay, go to Gotham Sound if you’re in NYC, and find some used Lectrosonics. Even something ten years old or more is going to outperform that prosumer stuff. It’ll pay for itself very quickly and you’ll be upgrading faster than you expected.

“Second,” he points out emphatically, “if you have downtime, help out the rest of the crew. The stereotype of the sound mixer is this disgruntled guy sitting in the corner reading a book when not actively recording. Refute that image. On one job I did, the first day was a scout-and-prep day more than anything, and once I got set up, I asked the camera guy, ‘Hey, I’m all set up. Anything I can help you with?’ At first, he looked at me like I had three heads. I wound up opening his Pelican cases and setting up lights. Be part of the team and almost magically, you’ll start getting a lot more callbacks.”

Well respected within the film, broadcast, and theatre technical communities since 1971, Lectrosonics wireless microphone systems and audio processing products are used daily in mission-critical applications by audio engineers familiar with the company’s dedication to quality, customer service, and innovation. Lectrosonics received an Academy Scientific and Technical Award for its Digital Hybrid Wireless® technology and is a US manufacturer based in Rio Rancho, New Mexico. For spare parts and a full line of accessories, visit the company’s online store: Lectrosonics U.S. Online Accessory Store.