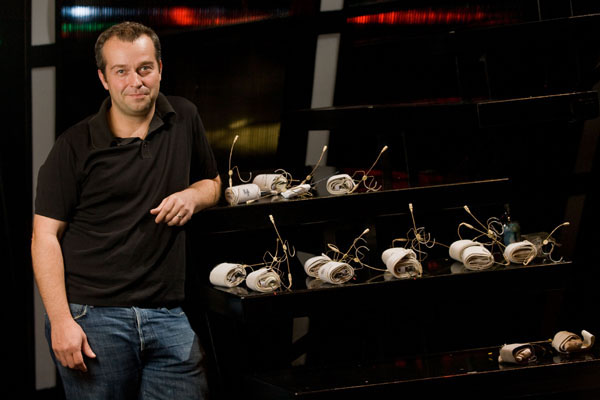 Arlington, VA… Being located directly across the Potomac River from Washington, DC, Signature Theatre knew very well what it meant to operate in a crowded RF environment. With airports, radio and TV stations, the Pentagon, and countless other users of wireless frequencies all around, selecting a wireless microphone system that could readily adapt to the ever-changing frequency characteristics of the area was no small concern. Of course, frequency agility isn’t the only issue for theatre sound professionals. There’s also sound quality, the ability to easily hide transmitters in wardrobe, and reliability. Given all these factors, there was only one real choice in terms of which manufacturer’s equipment to select: Lectrosonics.

Matt Rowe, Signature Theatre’s resident sound designer, is responsible for all audio-related matters at the venerable theatre. A veteran audio professional who started his career as a recording engineer before transitioning to live sound reinforcement and who now marks his twelfth season in theatrical sound design, Rowe described the audio challenges that routinely confront him at Signature Theatre.

“As a suburb of greater Washington, DC,” Rowe explained, “there are countless users of wireless equipment in our area. One day, a particular frequency may be available and then the next, it’s occupied. Being located in such a crowded RF environment, it was critical that we find a wireless system that not only delivered excellent sound quality, it also had to be able to adapt to changing RF conditions and, ideally, be able to expand the channel count should circumstances require. Equally important, we wanted transmitters that could readily be hidden among the talent’s wardrobe and they needed to be robust so as to withstand the bumps and drops that routinely occur in theatrical use.”

Signature Theatre’s new wireless system was first used on the production of Chess, which runs through late September. “Chess, featuring Broadway’s Jeremy Kushnier, Euan Morton, and Jill Paice, is a rock ‘n roll musical,” says Rowe.“We’re four weeks into production and we haven’t encountered a single RF issue. I’ve been particularly impressed with Lectrosonics’ SmartTune™ feature that enables me to easily find available frequencies at the touch of a button.” Lectrosonics’ SmartTune feature automatically scans all the available operating frequencies within the system’s frequency block range and then selects the frequency with the least amount of RF interference.

Rowe was equally complimentary of Bexel’s support throughout the initial setup process. “They really went above and beyond the call of duty,” he said. “In addition to helping us with frequency scans, they met with us on numerous occasions to go through the entire process of using the equipment—making certain that we fully understood its operation.”

With several weeks of use under their belts, Rowe offered these thoughts on the theatre’s new wireless microphone system, “The Lectrosonics equipment is performing just as we had hoped it would. The sound quality is first-rate and the small size of the transmitters makes them a perfect choice for use with wardrobe considerations. The Venue system’s modular frames facilitate expandability and make it easy to configure a system to one’s channel count requirement. The value and performance of this system made it a no brainer when it came to determining which manufacturer’s equipment to invest in. I’m confident we couldn’t have made a better purchase decision.”

About the Signature Theatre

A recipient of the 2009 Regional Theatre Tony Award®, Signature Theatre is a nonprofit professional theatre company dedicated to producing contemporary musicals and plays, reinventing classic musicals, and developing new work. Since its founding in 1989, Signature has been nominated for 276 Helen Hayes Awards for excellence in the professional theatre and has been honored with 70 Helen Hayes Awards, including Outstanding Musical in 1992, 1993,1995, 1997, 2000, 2005, 2006, 2008, and 2009, and Outstanding Play in 1999. For additional information, visit www.signature-theatre.org.