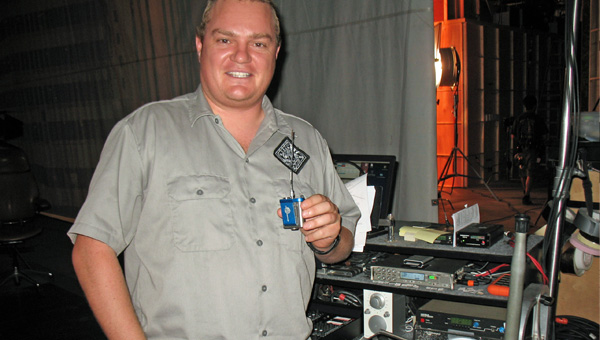 Los Angeles, CA – September 2012… For those audio professionals working ‘in the trenches’, the ability to capture sound accurately and reliably the first time around is of paramount importance. There simply isn’t much opportunity for another take. That’s precisely why Bud Raymond, a location sound professional who works in TV and film, relies on Digital Hybrid Wireless® technology from Rio Rancho, NM-based Lectrosonics.

Raymond got his start in film work as a utility sound technician and boom operator roughly twelve years ago. For the past three years, he’s been working as a sound mixer for TV and film and counts his contributions to the comedy film A.C.O.D. (Adult Children of Divorce) and Lifetime TV’s comedy – drama offering titled Drop Dead Diva among his most notable credits. His most recent project was for an independent film shot in Atlanta, GA called Plus One.

According to Raymond, “Every film I have ever worked on, starting in my days as a utility sound technician, has been done with Lectrosonics. After 12 years of use, I have a comfort level with the gear that I simply don’t have with any other equipment.  And despite the changes the various products have gone through over the years, there’s never a steep learning curve with the newest generation products.”

When asked about those Lectrosonics attributes that are most notable, Raymond offered the following. “Fidelity and sound quality are the most important factors. Lectrosonics gear sounds fantastic. There’s none of the disturbing audible artifacts that are frequently encountered with wireless systems that use compandors. The second most important feature is theirstrength and build quality. Wireless transmitters go through a ton of abuse on a film set and they are frequently handled by less than careful actors. Equally important is the ease with which I’m able to identify and lock down available frequencies. Being able to surf the channels for open RF space is an absolute necessity these days and Lectrosonics makes this process quick and easy.”

Lectrosonics build quality came to the forefront of Raymond’s attention during the filming of Plus One. “We had a dialogue scene where the sprinklers went off during a party inside a house,” he explained, “and I was concerned about how we were going to record the dialogue.  I knew the SM’s are water resistant, so I combined them with a Countryman B6 waterproof lavaliere mic in hopes that we might be able to pull the scene off.  We ended up shooting that scene for two days. During this time, I wrapped the SM in some extra latex protection to be safe, and it worked flawlessly.”

For a location sound pro like Raymond, responsive customer and technical support is of paramount importance. Here, too, Lectrosonics excels. “From time to time, there’s always going to be a need for an update or some other work to be performed on the gear—that’s just the nature of this business. On the rare occasions that I’ve sent equipment back to the company, the turnaround time has been very quick. I’ve been completely satisfied.”

Before shifting his attention back to an upcoming project, Raymond offered this final thought, “One of the greatest things about using Lectrosonics gear is you can go on a job anywhere in the country and sound technicians everywhere know how to operate it.  The fact that there’s no learning curve because we’re all used to using the same gear is a huge benefit when you work with different people. And it’s nice to know you have a bunch of fanatics backing you up!”

For additional information about Bud Raymond, contact him via email at This email address is being protected from spambots. You need JavaScript enabled to view it.