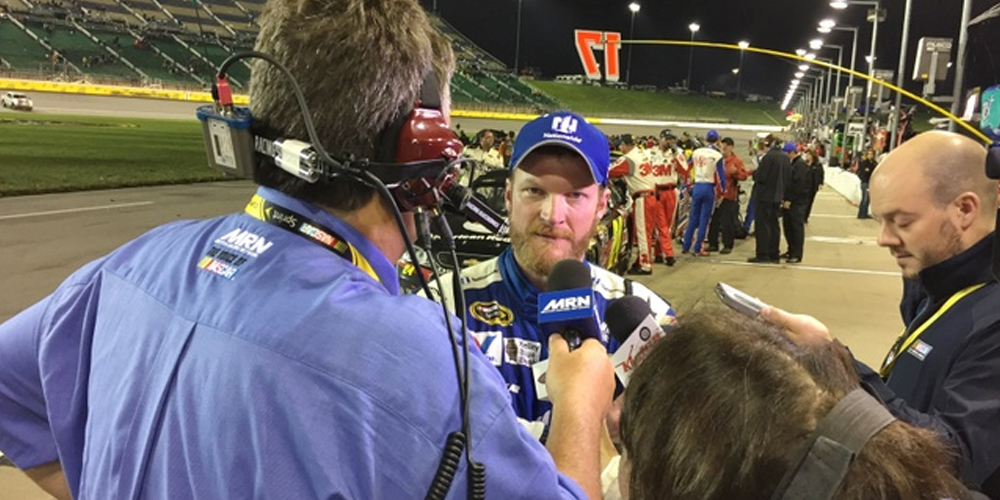 “One of the things that make a company great is their service—and the Lectrosonics guys are awesome. We couldn’t do our job without Lectrosonics.”

“Between the three trucks we have 54 pairs of SMQV transmitters and Venue receivers,” reports Doug Watson, Chief Engineer of Motor Racing Network, which also maintains production studios at its headquarters in Concord, NC. When MRN was building its latest truck, which rolled out for the 2014 season, Watson and his crew took the opportunity to also upgrade its Lectrosonics wireless packages for the pit interview and turn calling talent. 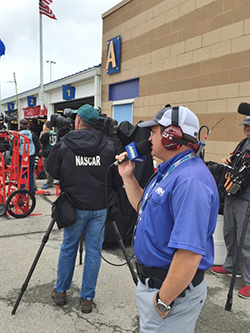 Previously, talent was weighed down with a big belt holding a large battery pack and an older, bulkier transmitter. “We found the Lectrosonics SMQVs and discovered they weigh 3.8 ounces with the batteries in them,” he says. “So we took a project box and put nuts and bolts in it until it weighed 3.8 ounces, then we taped it to one of our headsets to see if we could eliminate the equipment belt. Now we clamp the SMQV on the metal band that goes across the back of the headsets, which are supplied by Racing Electronics.”

With the new wireless set-up, even with a spare pair of AA batteries taped to the headband, says Watson, “It’s a lot less weight to carry around. And with the Ultimate Lithium batteries in them they’ll run for seven and a half hours.”

He continues, “On a typical race weekend we have three guys in the pits on wireless, a guy at each end of the track on wireless and we’ll put a crowd microphone out on wireless as well. We also provide wireless pre- and post-race coverage for Sirius XM. Plus, we always program a couple of spares, just in case.” When NASCAR visits the four-mile Road America racetrack in Elkhart, WI, he adds, “We have nine turn positions, so there are 11 Lectrosonics wireless channels out on a weekend like that.”

The pit and turn audio packages may have the SMQV wireless transmitters in common, but the headset styles and applications are very different, Watson explains. “For the pit guys, we come right off the transmitter to a mic cable. They carry around a Sennheiser handheld mic, with an on/off switch, for their interviews and pit calls. For the turn guys, we put a Beyerdynamic mic on a boom attached to the headset, with a push-to-talk switch. As the race comes around they push-to-talk and call the action in front of them.”

The workhorses of MRN’s mobile fleet are two 53-ft. Featherlite trailers, the newest of which is essentially a radio production facility on wheels and is outfitted with primary and secondary studio/control room pairs, an edit suite, work space for the on-air talent, an office and an engineering area, plus kitchen and bathroom amenities. All of the broadcast equipment is networked on an Axia Audio Livewire backbone, which is connected over redundant fiber paths to an Axia node in the racetrack broadcast booth.

“We have a Venue shelf that sits in the booth where we receive all of our pit guys—it’s a straight shot from right above the track,” says Watson. “We run RS-232 over the fiber as well; that’s how we talk to the Venue receivers in the booth.”

Out on the racetrack, the turn talents’ transmitters are running at full power. “I’m sure we stretch them far beyond how they were designed to be used,” laughs Watson. For example, he says, “Daytona is a two-and-a-half-mile track, one mile rim-to-rim, so we’re probably shooting more than a half-mile from the far turn to the truck. A lot of times we have to take a Yagi antenna out and point it at the truck. At our truck we have a pneumatic mast that we put Yagis on, pointed at the turns.”

But as good as the equipment might be, says Watson, “One of the things that make a company great is their service—and the Lectrosonics guys are awesome. We’ve got 54 pairs of wireless, so you’re going to have issues. We send them in, they repair them and get them right back to us. We couldn’t do our job without Lectrosonics.”