Pristine audio quality and robust performance make all the difference 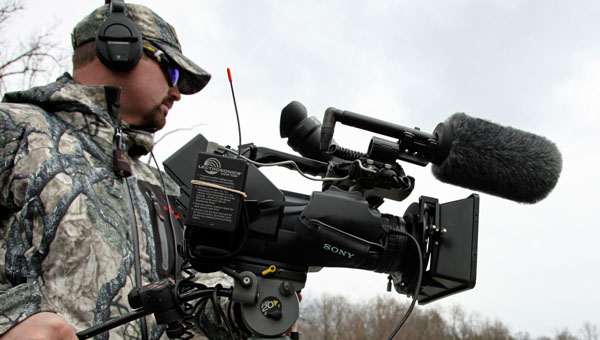 Missoula, MT… When it comes to wide open space, few areas of the country can top Big Sky Country, also known as Montana. While 4th in size, Montana is 44th among U.S. states in population. With such an abundance of open territory and a general lifestyle emphasis on the Great Outdoors, it should come as little surprise that a show about fishing and hunting originates here. Skull Bound TV is the name of the show and it follows host and Associate Producer Jana Waller as she combs the planet with bow, gun, and rod in hand searching for that next adrenaline rush—much of it faithfully captured using wireless microphone technology from Rio Ranch, NM-based Lectrosonics.

Jim Kinsey is the Executive Producer of Skull Bound TV. With a background that encompasses more than a decade of production experience, including projects for National Geographic and two seasons of Skull Bound TV, Kinsey's first exposure to Lectrosonics equipment occurred in 2001 during production of National Geographic's Women Smoke Jumpers, a one-hour special that followed smoke jumpers fighting fires in the rough terrain of Idaho and Montana. "This project took place among some really incredibly rugged terrain," Kinsey recalls, "and, after experiencing Lectrosonics' performance on that project, I knew I had to add a set of Lectrosonics gear to my own kit."

Kinsey discussed his use of Lectrosonics equipment on the show, "Being an 'on-the-fly producer' with a single host, we don't have time for re-creates. It's a one shot deal in the 'Hunt and Hook' market. We've been using the Lectrosonics 100 series units, which are completely portable and designed for camera mounting. My system includes the UCR100 camera mountable receiver and LM beltpack transmitter. This has been a perfect setup for 'run and gun' production. I'm a one-man band and do all the sound, shooting, and editing for the series."

In addition to the audio quality of his Lectrosonics equipment, dropout-free, performance and durability are crucial factors in Kinsey's type of production. "On many occasions," he explained, Jana will be far away from the UCR100 receiver while searching for big game. I am continuously impressed with the fact that I get crisp sound all the time—without dropouts. Equally important the build quality of the 100 series units are rugged as the day is long. They really hold up under some very adverse conditions."

"While filming a two part series in southeast Alaska," Kinsey continued, "my equipment encountered high humidity and got rained on quite often. While the UCR100 receiver and the LM transmitter aren't waterproof, the gear performed flawlessly and got me through the shoot without a single hitch. This equipment is really built to withstand the brutal conditions that one frequently encounters in field production of this type."

Kinsey reports that, in addition to the exceptional performance he routinely experiences with his Lectrosonics wireless equipment, he is equally impressed with the quality of the company's customer and technical support services. "Quality customer service is extremely important in this line of work," says Kinsey, "but to be perfectly honest, I have to say I've yet to need any assistance from Lectrosonics. It all boils down to this: when you buy the best in the business, you get the best results."

As he prepared for another day's production, Kinsey offered the following final comments. When you find a product that consistently delivers year in and year out, an old saying holds true: 'If it ain't broke, don't fix it!' When it comes to uncompromised functionality that stands up against the rigors of producing reality television, look no further than Lectrosonics for your next production—no matter how big or small the project may be."