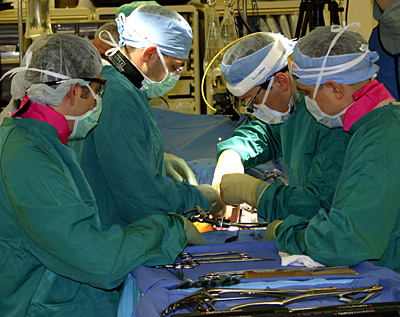 LACKLAND AIR FORCE BASE, TEXAS: Craig Miller, a medical videographer at Wilford Hall Medical Center on the grounds of the Lackland Air Force Base just outside of San Antonio, has a demanding yet noble job: to capture the sights and sounds of surgeries for military hospital instructional videos. Working closely with some of the U.S. military's most distinguished surgeons in the Medical Multimedia Flagship, Miller daily records both audio and video of the latest surgical processes, which is then compiled to train others stationed in Air Force hospitals worldwide.

Miller insists that for the longest time, his department possessed a very capable video system, yet the quality of his audio gathering tools was lacking to the point of his perpetual embarrassment. "The equipment that I was provided was never up to par with what these doctors expected from a professional organization," explains Miller. "I've had wireless audio equipment that just wasn't reliable, and would have to make 'workarounds' for things just to function. I literally had a junk drawer full of wireless mics that we used. It was like using a 500 horsepower dragster in the Avid system, and then my audio system was like using training wheels on it. Doctors would ask, 'What do you mean you have a $164,000 Avid system? And the audio sounds like this?' I finally said, 'That's it, I'm not going to skimp anymore.'"

After doing a bit of research and talking with Texas Media Systems, Miller discovered Lectrosonics wireless audio systems. "I called Lectrosonics to find out why their equipment has such a good reputation and learned a lot about their stellar manufacturing process," he recalls. Soon after, he purchased a bevy of aluminum-housed Lectrosonics products: the UCR201 Compact UHF Receiver, UCR411a Digital Hybrid Wireless(tm) compact receiver, UM200C wideband UHF belt-pack transmitter, and the UM400 Digital Hybrid Wireless UHF belt-pack transmitter, which, says Miller, is still on back order. He can hardly wait to get it. "I have the other models, but the UM400 is going to be my baby. Now I have equipment that's better than what 'combat camera' gets; it's so rugged that it could go off to war, if need be."

Blake Naleid at Texas Media Systems explains that "The absence of analog companders in the 400 series completely removes the audio artifacts from the equation" and adds that the MM400A “is also very small and comfortable to wear, which is important to doctors conducting surgical procedures. Both the analog UM200C and the Digital Hybrid MM400A have a powerful 100mW RF output which reduces audio dropouts.”

Along with his new Lectrosonics wireless microphone equipment, Miller's audio and video rig features Canon GL1-S cameras for location video recording, dual Avid Media Composer systems, and an analog Mackie mixer for his productions' dialogue-only audio tracks. "We'll incorporate the Lectrosonics equipment into our in-house recording setup, too," insists Miller. "I'm going to use it for everything."

The compact UCR201 receiver is designed for use in camera-mounted applications for field production and location recording, and is compatible with all 200 Series transmitters. The UCR201 offers 256 selectable frequencies over a 25.6 MHz bandwidth in standard frequency blocks in 25 MHz steps from 537.600 to 742.200 MHz. Other features include microprocessor control, balanced XLR output, and a multi-function LCD display for audio level, antenna phase, frequency, and a graphic RF spectrum analyzer.

The UCR411A is also designed for field and location use, and offers all adjustments from its front panel, making it a perfect choice for use in portable, rack-mount carriers. Lectrosonics' patent-pending Digital Hybrid Wireless(tm) technology is used in the UCR411A, which also features 256 selectable frequencies, auto-tracking front-end filters, DSP-based pilot tone, a backlit LCD display, balanced XLR output, and compatibility modes for use with analog transmitters including those from the 200 Series.

The UM200C is a 100mW UHF transmitter incorporating a circulator/isolator and is ideal for use in environments where television and radio broadcast equipment can cause frequency coordination problems. The UM200C features 256 frequencies selected in 100kHz steps, dual LEDs, a variable low-frequency roll-off adjustment, wide-range input limiting, and a dual-band compandor.

Miller's work on surgical videos places him in demanding environments where there simply isn't a second take. As a result, he simply cannot worry about whether his audio system is working properly. With his new Lectrosonics wireless microphone setup, substandard audio 'cleanups' and making do are no longer the standard for Miller.

"The quality of the audio is very important in the narrative aspect when the doctor puts the video together," Miller explains. "Before, I would have to use the equalizer built into the Avid system to get the sound to an acceptable level. But even then, it really never got there. It never had the quietness or dynamic range that the Lectrosonics equipment provides. Now, the people we record will be more confident. They are rarely speakers and often shy away from the microphone. When I tell them that this is a piece of equipment that will get their message across, which in turn teaches them to save lives over in the war, they're going to feel a lot more confident and sound a whole lot better."