Lectrosonics TM400 Wins At The Wynn 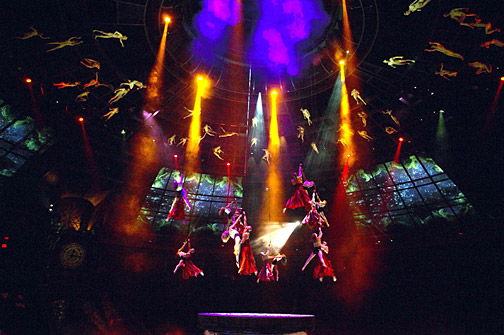 LAS VEGAS, NEVADA: While readying the sound system for the Wynn Las Vegas' brand new Aqua Theatre, theatrical audio specialist Pascal Van Strydonck, head of audio for the venue and also the show's sound designer, was presented with a significant problem. The 2,087-seat, in-the-round home of Franco Dragone's "Le Reve - The Show" was suddenly not the same venue acoustically as originally designed. Fronted by a Yamaha DM2000 digital console, the house PA, a 5.1 surround, 360-degree, six-zone system by Meyer Sound, was already ordered and installed, yet architectural and rigging changes significantly affected its performance.

As a result, Van Strydonck decided that comprehensive acoustic measurement and tuning were in order for the theater. "The quality of the PA is impeccable," clarifies Van Strydonck. "But unfortunately the cabinet types were chosen for a specific design and it wasn't really covering everything. We needed 80 by 100 degrees of coverage and got 40 by 35 degrees of coverage."

The venue's unique design factors further contributed to some unseemly acoustic issues. "It's an extremely special place," explains Van Strydonck about the theater, which features a parabolic dome, an opposing parabolic floor, and a 27-foot deep, million-gallon pool at its center. "An interesting acoustic aspect are the two parabolic structures facing each other - the floor and the ceiling. The seating area isn't just a straight incline; it's actually curved. Add in all the water and humidity, and it's a very challenging acoustic environment."

Needing a practical way to measure the theater during rehearsals and full audience performances, Van Strydonck with the assistance of another one of the Wynn's audio experts, Steve Weiss, used SIA-SMAART sound analysis software - recommended by SIA's Jamie Anderson - and a Lectrosonics TM400 wireless test and measurement system." With a 360-degree theater, hauling cable was really a pain," Van Strydonck explains of his wireless test route. "Doing so made measurements an extremely long process, even though the original idea was to measure one section, then replicate the findings and values in each of the other five sections." The TM400 system changed all that. "By carefully analyzing each section independently, we were able to apply the correct data and improve things dramatically."

"I was really amazed by the Lectrosonics system," explains Van Strydonck. "It's well made. It has no-nonsense operation. It's affordable, and Lectrosonics service is just beautiful. In all my time working with the company, there's not been one install that I've done when they haven't volunteered to come over and see what's happening. Buying Lectrosonics is like buying better support."

Much of the multi-sensory power of "Le Reve - The Show" comes from its aquatic settings. The Aqua Theatre is a perfect example of how the presence of water can shape environment and mood. Add a packed house to the mix - when audience members brought their own acoustic properties to the setting - and testing with the TM400 was a most helpful scenario.

"Platform lift elevators constantly break the surface of the water, thus changing the reflective nature of the theater throughout the show," explains Van Strydonck. "That changes my reflection path, while humidity also changes rapidly. We have huge fountain effects and our mist system is probably the biggest ever devised. That should give you an idea of the theater's changes in humidity and temperature. While testing during a performance, I was able to hang onto the mic, walk around the venue, sit in different seats, and test in the midst of all these factors. I just couldn't haul around 500 feet of cable. I used a small pistol-grip microphone with the TM400 and pointed it at the PA. Doing so allowed us to examine the differences between an empty and full room. Those measurements were only possible with a wireless measurement system like the TM400."

In the end, the ease in which a wireless test and measurement system allowed Van Strydonck to analyze the Aqua Theatre resulted in far more complete statistical results, which led to better acoustic treatment of the space. "Where you may normally do three or four measurements per section," continues Van Strydonck, "we did 20 or so measurements per section. Without the TM400, we would've probably skipped over a couple of measurements and just went for the main ones. Some of those finer measurements gave us interesting data and allowed us to rethink much of what we needed to do. The TM400 performed flawlessly and was a tremendous help."