Lectrosonics: The Wireless Link With The Baltimore Ravens

Soundriven, Inc. looks to Lectrosonics for features and reliability 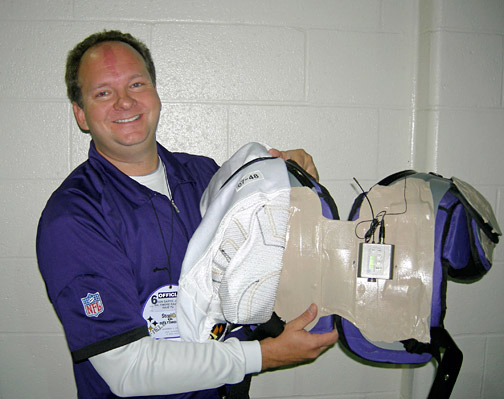 Baltimore, MD… Football is generally considered the hardest-hitting contact sport. With games played in all types of weather—from blazing heat, to drenching rain, to ice and snow—this is not an environment that is conducive to temperamental electronics. For Soundriven, Inc., the firm contracted to provide on-field audio for the Baltimore Ravens football games, the need for top quality, rugged wireless microphone equipment with the right feature set is of paramount concern. For this reason, they look to wireless products from Lectrosonics for the answer.

Baltimore, MD-based Soundriven, Inc. provides location audio and audio post-production services for film and video. The firm has a storied history with public television and, over the years, has handled countless location audio and sound design/mixing projects for numerous corporate and commercial clients throughout the Baltimore-Washington DC area. The firm—co-owned by Don Barto Jr.—has been contracted to provide audio services to the Baltimore Ravens in various capacities since September 2000. Currently, they are working with the Ravens on RAVE-TV, one of the few broadcast services owned and operated by an individual NFL team.

According to Don Barto Jr., “The Baltimore Ravens Broadcasting Department (RAVE-TV) has two shows on the air. Ravens Wired, an Emmy Award winning program that offers television viewers a first-hand, on-the-field look at what takes place during a game, has two segments: (1) Wired, which follows an individual player or coach, and (2) Behind the Bench, which focuses on team activity from the sideline bench area. The second show, Ravens Report, is a sports news program designed to give Ravens fans access to coach and player interviews, news and information about the Ravens, their involvement in the community, plus stats and information on upcoming games. For all of our involvement with these programs, Lectrosonics wireless equipment plays an integral role in our work.”

For Wired, the Ravens team player selected for any given program is outfitted with a Lectrosonics SM Series Super-Miniature Digital Hybrid Wireless™ UHF belt pack transmitter. To withstand the pounding the player will experience on the field, the transmitter, which is paired with a Countryman B6 microphone), is wrapped in plastic (to increase its tolerance to moisture) and mounted to the rear of the shoulder pads using a combination of double stick tape and zip ties. An aluminum plate—specifically tailored to protect the transmitter, microphone connection, and antenna—is placed on top of the assembly and the entire setup is covered with adhesive-backed foam padding, making a package that is completely smooth with no protrusions or exposed weak points.

The player’s SMDa transmitter broadcasts to two Lectrosonics UCR411a Digital Hybrid Wireless Compact receivers. Barto reports, “One of the receivers is for the cameraman whose sole job is to follow the wired player, and the second receiver is used for charting. The person responsible for charting captures the audio and has it stamped with timecode. This enables the program directors to know exactly where any given segment occurred during the game, so that it can be tied to other game footage.”

For Behind the Bench, Barto and an associate cameraman follow the activity up and down the field from the sidelines, with most of the coverage coming from the team’s on-field bench area. For this, Barto uses a boom mic and a Lectrosonics UM200 belt pack transmitter, which feeds the cameraman’s UCR201 Compact Diversity UHF receiver. As is the case with the wired player, a second 200 Series receiver is used for charting with timecode.

“In addition to these two setups,” said Barto, “we use another 200 Series transmitter and receiver. These are used to feed the radio announcer’s microphone output to our ‘Up Top’ game camera. The Ravens currently own four sets of Lectrosonics transmitters/receivers that are used for their games. They also own some additional Lectrosonics IFB and wireless equipment that is used for other duties.”

To help ensure trouble-free operation amidst a variety of unknown—and frequently, unanticipated—occurrences, Barto uses Lectrosonics’ RM remote control with the SMDa transmitter on the wired player. “Being able to modify audio gain, lock and unlock controls, and even change frequency has been tremendously important for us,” notes Barto. “Asking a player for his pads, pulling everything off to expose the transmitter, and then making adjustments is simply not an option. By using the remote control, we can manipulate so many functions of the unit without any inconvenience. An NFL football field can be a fairly hostile RF environment, and while the Frequency Coordinator does his best to assign clear, open frequencies, things don’t always go according to plan.”

In addition to the company’s reputation for cutting-edge wireless technology and bullet proof reliability, Barto is equally impressed with Lectrosonics’ customer and technical support services. “When I ordered our first remote, I experienced some difficulties, so I contacted our vendor, who referred me to Howard Kaufman, the local Lectrosonics representative. After a few questions, Howard replaced the unit immediately. Upon testing it, everything worked according to plan. In our business, that level of qualified, responsive support is invaluable for our mission critical applications. It doesn’t get any better than that!”