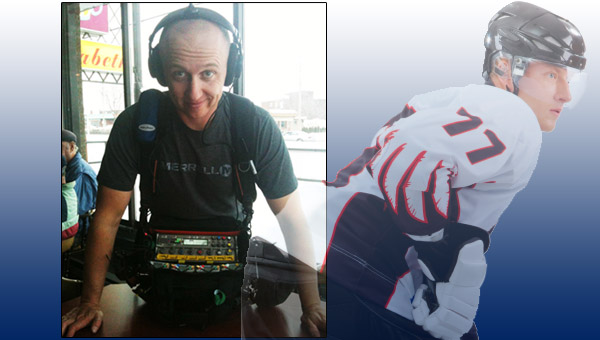 Prévost, Quebec, Canada – March 2011… While the activities of the NHL tend to grab the spotlight when it comes to hockey, there are countless enthusiasts who never quite attract the attention that the professional players achieve but who, nonetheless, have a tremendous passion for the sport. As such, there are secondary hockey teams and leagues whose love of the game consumes much of the players' daily lives. Morin-Heights, QC-based production company ShootFilms is currently in post production on a documentary that examines these amateur players and follows them as they pursue their favorite sport. Both on and off the ice, the audio for this forthcoming theatrical release was faithfully captured—thanks to the performance attributes of Lectrosonics wireless technology.

Audio designer and consultant Pascal Van Strydonck was responsible for location sound on the project. Van Strydonck, who handles location sound recording for TV and film, discussed the audio challenges he encountered on the hockey documentary and his reason for choosing Lectrosonics' SRa Dual-Channel Slot Mount ENG receivers and a variety of the company's transmitters.

"Amateur hockey league is a big deal in Quebec," explains Van Strydonck. "We followed fifteen players to get a look at how hockey impacts their lives. In addition to the games, this included locker room activity and everything that happens behind the scenes—before, during, and after each game. The name of the team we followed exclusively is La Bande a Japs.

"There were three types of shooting environments," Van Strydonck continued. "We followed 1-2 individuals in their day-to-day lives, which involved a standard documentary setup with a wireless microphone and boom. Secondly, there was the locker room coverage. This was handled via a wireless mic and boom using a Lectrosonics UH400 plug-on transmitter. For the actual hockey games, which we handled from the sidelines, we covered both the team bench as well as the players on the ice. For this, we outfitted the players with various Lectrosonics Super-Miniature transmitters, including the SMa, SMV, and SMQV models. We also used the Lectrosonics UM400a beltpack transmitter."

In addition to the aforementioned transmitters, Van Strydonck used eight channels (four units) of Lectrosonics' SRa Dual-Channel Slot Mount ENG Receivers in his bag plus an additional unit for the camera hop. Augmenting all this was a custom-built antenna distribution system comprised of components from Mini-Circuits and Lectrosonics, including the Lectrosonics UFM50 filter/amplifier. Additionally, Van Strydonck used a custom built coax dipole antenna system based upon diagrams provided by Joe Burtinsky, the staff technician at Lectrosonics' Canadian headquarters.

Van Strydonck reports that, typically, he would use Lectrosonics' UCR411a compact receivers for his location sound projects, but due to the fast-paced nature of hockey, he required a setup that would enable him to be considerably more mobile. "The conventional equipment cart simply wasn't suitable for this type of job," said Van Strydonck, "Producer Richard Blackburn suggested I look into some sort of multichannel wireless bag arrangement, and this is why I began eyeing the SRa ENG receivers. The SRa weighs roughly half of the UCR411a and offers 2 channels as opposed to one. Further, it consumes about half the power of the UCR411a. To get straight to the point, by using the SRa receivers, I eliminated a cart-based setup and was able to fit my equipment into a much smaller and lighter bag that didn't weigh me down. I couldn't have done this project without the SRa receivers."

In addition to Lectrosonics' customary high level of performance and sound quality, the company's technical / customer support services proved invaluable on this assignment. "Lectrosonics' equipment has terrific sound quality and is built really tough," Van Strydonck said, "but in this particular case, it was the company's support services that really stand out. I realized the SRa might not be the preferred solution for a job of this nature, but I really needed to minimize the footprint of my setup, so I required assistance and Lectrosonics really stepped up.  Customer support was exemplary. Lectrosonics Canada assisted with frequency coordination and several other last minute requests for assistance. Both Collin Bernard and Joe Burtinsky went well above and beyond the call of duty."

Reflecting on the project, Van Strydonck offered this parting thought. "This project demonstrated that I could create a cart-based system capable of residing in a very small bag. The experience opened countless possibilities for performing heavy documentary work or light fiction-type projects with a much lighter equipment setup than would typically be expected. Much of this is the result of the Lectrosonics SRa receiver being tremendously more powerful and versatile than what the company typically advertises. This was, without question, and eye opening experience."

To learn more about Pascal Van Strydonck, visit him online at www.pascalv.com.