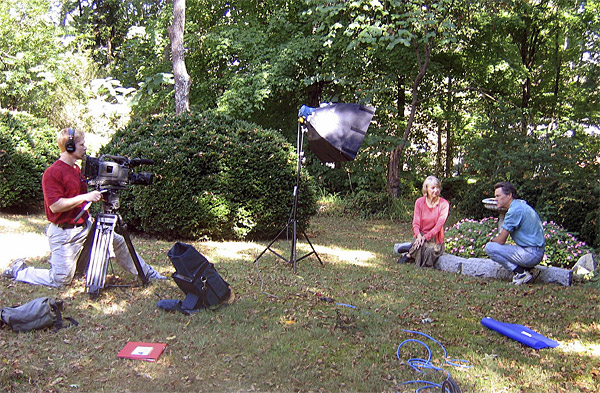 MOUNT AIRY, NORTH CAROLINA: It's no secret that in lower-budget television production, technical challenges often abound. For instance, public television programs such as PBS' "Simple Living with Wanda Urbanska" may be well received - it regularly reaches 84 percent of the national PBS market - but that doesn't mean it has a budget similar to advertisement-flanked programs on major network and cable channels.

Videographer, editor, and post-production engineer Tim Snider experienced this fact first-hand upon his hiring by "Simple Living." Based in Mount Airy, North Carolina, the Simple Living Company needed a capable editor for their most recent season. They joined forces with Snider, owner and president of Deja View Media, a video production firm based just outside of nearby Greensboro. He quickly discovered that while the video component of the show was great, the audio, well, was not.

"Their audio was horrible," he recalls. "As a lot of programs without big sponsorships and revenue, they were doing things on a shoestring budget. So I began to look for a way to drastically but easily increase their audio quality."

Snider was soon shooting for "Simple Living" as well, and while he was cultivating a great relationship with the show's staff and producers, he was also cultivating a low-cost, big-payoff audio solution. As proposed by Snider, the necessary improvements arrived upon the first use of a complete Lectrosonics wireless microphone system, comprised of the UCR201 portable UHF receiver, LM Digital Hybrid Wireless transmitter, and a Tram TR50 miniature lavalier microphone.

Not only did the Lectrosonics wireless system increase audio quality, it also made Snider's gig at "Simple Living" significantly easier. "The Lectrosonics made an amazing difference in every way," Snider explains. "Audio quality improved, dependability improved, and things became easier both in the field and in post. In the field I was getting great signal without a lot of interference. It was very dependable, and easy to use. Then in post, it saved me a lot of time as an editor. Now I don't have to fix things. The quality is consistently good, and there's now a lower risk of having to re-shoot or overdub the footage."

"Simple Living's" audio/video field equipment is extremely streamlined, yet more than capable. For shooting, Snider uses a Sony DSR-500 camera recording in DVCAM mode. The Lectrosonics UCR201 receiver is mounted directly on the cam. "We didn't use a mixer this past season," explains Snider. "We will use one for the next season, though, plus a couple of extra Lectrosonics systems - probably a Lectrosonics UCR411a Digital Hybrid Wireless™ system in addition to the UCR201."

While Snider knew what he could expect by incorporating a Lectrosonics wireless system into "Simple Living's" production, there were a couple of instances where he was surprised at just how well it worked. "There have been several instances of that," he says of these discoveries. "Once we were shooting at a monument they wanted to use as a backdrop, which also happened to be near a busy street. To make matters worse, we were also shooting during rush hour traffic. While I was worried about the lighting and shooting aspects, the audio was my primary concern. I taped the Tram to the talent's chest, right underneath her shirt. As a result, I was able to get a much lower noise floor in that situation than other mic and wireless system combinations I have used in the past. We got great signal and as an added bonus, I didn't have to do that much in post to make the audio work. It turned out at least ten times better than we thought it would."

Even when production audio is unusable due to lackluster acoustic conditions, the Lectrosonics/Tram system still delivers. "When we did voiceovers on the fly, I was using the system and it worked really well," explains Snider. "I just put the talent in a closet and recorded them with the wireless system. That's the way that a lot of the voiceovers are done on the show."

Snider, who has experienced quite a bit of success since changing his career path from software development to something with "more of a creative, passionate bent," is already looking forward to the next season of "Simple Living" and the challenges it will present. "I've always enjoyed the creative side of things, but I never really knew that I would excel at cinematography, editing, and post-production," he says with amazement. "It has really become my passion, though. I wake up every day just totally stoked to do my job. It's a great career choice for me."

For more information about Tim Snider, his business, and his studio, visit Deja View Media's website at www.dejaviewmedia.com