Rio Rancho, NM – October 2007… Lectrosonics, recognized the world over as a leading manufacturer of wireless microphone systems and audio processing products, is pleased to announce that the United States Patent and Trademark Office (USPTO) has issued the company a patent (U.S. Patent No. 7,225,135) for its Digital Hybrid Wireless technology. Digital Hybrid Wireless —an integral part of the Lectrosonics Venue, UCR401, UCR411A, and R400A receivers as well as transmitters from the SM, UM, MM, UH, and UT product groups—enables the company’s wireless systems to deliver world-class performance for countless major motion picture and TV projects, as well as being found on stage with leading performers such as the Dixie Chicks and Santana. Additionally, the technology provides backward compatibility with earlier wireless systems from Lectrosonics’ as well as those from other manufacturers. 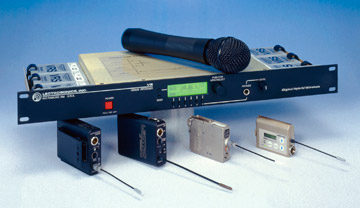 David Thomas, Lectrosonics Senior Design Engineer and inventor of the company’s Digital Hybrid Wireless technology, commented on the benefits it brings to today’s audio professional. “Digital systems may be hard to beat in terms of audio quality,” notes Thomas, “but they can't touch analog FM systems in terms of spectrum efficiency and long operating range. Enter Lectrosonics’ Digital Hybrid Wireless technology, which combines the best of both worlds. Its digital audio processing makes optimal use of the analog channel—transmitting an encoded signal that is both loud and wideband, to soar over the noise. Of equal significance, Digital Hybrid sounds natural, even on the fringe of reception.”

In addition to its prevalence in motion picture and television work, Lectrosonics Digital Hybrid Wireless technology is an integral part of many live sound projects—both on stage and behind the scenes. The company’s core Digital Hybrid Wireless products such as the UCR411A and Venue receivers, SM Series, plus the UH400A and UH400TM plug-on transmitters are commonly found in use by performers and their engineers while the TM400 Wireless System for Test and Measurement has found favor with the large-scale concert touring companies and loudspeaker companies for sound system alignment.