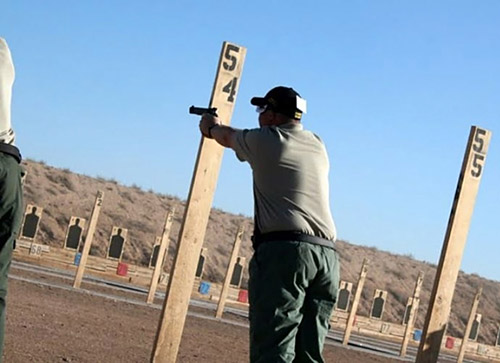 Albuquerque, NM – December 2009… In order to handle the frequently unpredictable and dangerous challenges involved in law enforcement, proper training and preparedness for today’s police officers is crucial. Police work is a dangerous occupation that requires officers to be sharp and responsive to a variety of adverse conditions. Hence, training exercises on the shooting range is a routine part of the profession. Recently, the Albuquerque Police Department hosted two shooting championships where officers from across the nation and around the globe demonstrated their skills and competed. On the range—in the heart of the action—two Lectrosonics Long Ranger 4 “Fast Charge” portable PA and wireless microphone systems were deployed to ensure contestants could clearly hear spoken commands.

Held at the Shooting Range Park in Albuquerque, the two back-to-back competitions included the Todd Parkins Memorial Regional Match, which ran from September 16-18, 2009 and was immediately followed by the NRA’s (National Rifle Association) National Police Shooting Championship that took place September 19-24. Art Martinez, Range Master for the Albuquerque Police Department—the largest and most well-equipped law enforcement agency in the state of New Mexico—discussed the nature of the events and the selection of the Lectrosonics equipment.

“The Long Ranger systems were used to communicate with competitors prior to and during competitive courses of fire,” explained Martinez. “We set these systems up on the range so the match announcers were able to project almost 200 yards downrange from where they issued their commands to the actual points where the competitors fired their weapons. The need for a dedicated PA system on the range is essential in order for the commands to be heard over the sound of gunfire.”

“Prior to the use of the Long Ranger,” Matinez continued, “the match announcers encountered numerous difficulties communicating with the competitors—especially considering our geographic location. The shooting range is located on a plateau, so we encounter a lot of wind and flying sand that makes understanding spoken commands very difficult at times. With the Long Ranger, we’re able to project the various commands in a manner that readily compensates for the weather—be it wind or even rain.”

The mobility factor was yet another important consideration for Martinez and others tasked with coordinating the competitions. Since the Long Ranger is wireless, the staff was not encumbered with cables as they would be with traditional PA systems. This made moving the system to the right or left flanks of the course much easier. Equally important, since the system is wireless, there’s no chance of a competitor tripping over a cable, and this is a very important safety factor.

The two Lectrosonics Long Ranger 4 systems were networked together, thus providing the freedom of mobility while being able to operate the equipment as a single unified setup. “The wireless range of the system is a huge benefit,” notes Martinez. “The equipment’s durability, its high degree of mobility, its wireless operating range, and the excellent battery life were all significant factors that resulted in the success of this event,” said Martinez. “We had a heavy four hour rainfall during the match and we encountered no problems with the system at all. Further, battery life was terrific. We ran this equipment for twelve hours a day and encountered no battery issues.”

The combination of wireless freedom, first-rate sound quality, and rugged build quality offered by Lectrosonics’ Long Ranger PA systems continues to impress Martinez. “This is a true plug and play system,” says Martinez. “You set it up, leave there, and it just keeps working. We’ve had our earlier Long Ranger III system for years and it continues to work well. The durability and reliability of Lectrosonics products is truly impressive. When there are roughly 100 competitors on the range, it’s extremely important they be able to clearly hear the various commands. That’s why we count on Lectrosonics.”

For additional information about the NRA’s National Police Shooting Championship, visit http://www.nrahq.org/law/Competitions/npsc/npsc.asp. To learn more about the Albuquerque Police Department, go to http://www.cabq.gov/police/.