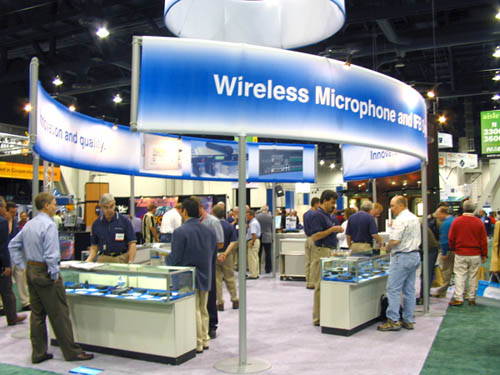 RIO RANCHO, NEW MEXICO: Lectrosonics is introducing a new receiver module with tracking front-end filters for their Venue modular system at the 2005 NAB Show in Las Vegas April 18-21. This new VRT receiver module is equal in audio performance to their standard VRS receiver module, with the added benefit of an auto-tuning front-end RF filter scheme.

Tracking front-end filters were pioneered by Lectrosonics in their UDR200 studio receiver and are used currently in their industry-standard UCR211 and UCR411 camera-mount receiver systems. Receivers with these filters have been highly praised by film sound mixers and broadcast engineers for their additional resistance to RF interference.

The tracking filter circuit in the VRT module consists of four transmission-line resonators with variable capacitance applied to each resonator allowing re-tuning as the receiver's carrier frequency is changed. The tuning range covers the full 25.6 MHz range of each of the standard frequency blocks and affords tunable, narrow-band filtering as selective as most fixed-frequency systems, with excellent overload performance.

Part of the standard Venue modular receiver system, the VRT tracking modules incorporate Digital Hybrid Wireless® technology, enabling compandor-free audio transmission in native 400 series mode, and compatibility emulation for use with several types of analog transmitters. Audio frequency response when used in 400 series mode with a compatible Lectrosonics transmitter is 32Hz-20kHz, with a dynamic range of 107dB. The VRT will be available in all nine Lectrosonics standard frequency blocks, covering the range between 537.600 MHz and 767.900 MHz and offering 256 frequencies in each block. Availability is scheduled for June 2005 and MSRP is targeted to be $660.00 per module.