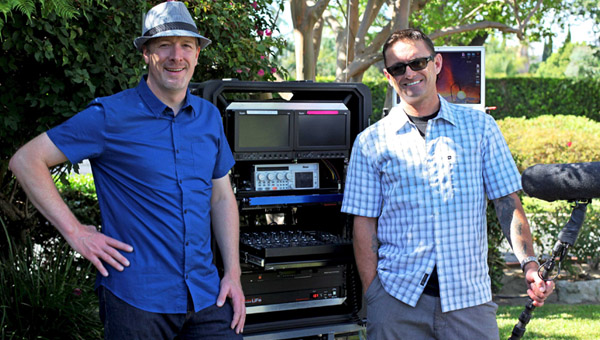 Los Angeles, CA – August 2013… With two successful seasons to its credit, ABC’s primetime soap opera Revenge has proven itself to be a potent contender in the highly coveted and extremely competitive Sunday evening timeslot. Set in the affluent Hamptons area of Long Island, NY, life is never quite as rosy as it may appear on the surface. The Grayson family and not-so-quite newcomer Emily Thorne seem to be perpetually at odds with each other. The tit-for-tat plot operates on numerous levels and the show’s dialog is precisely what keeps viewers wondering, “What’s next?” Capturing that dialog is crucial to everything that happens on camera—and this is precisely why wireless microphone technology from Rio Rancho, NM-based Lectrosonics is so crucial to the show’s production.

Scott D. Stolz, CAS, Production Sound Mixer and owner of LA-based Good for Sound, handles the show’s location sound services. With a 3-man crew consisting of Chris Quilty, Sean Byrnes, and himself, the team makes extensive use of Stolz’ arsenal of Lectrosonics equipment, which features the company’s acclaimed Digital Hybrid Wireless technology. Key Lectrosonics components include UM400, SMV, SMa, and SMQ transmitters, a Venue receiver mainframe outfitted with one VRT and five VRS receiver modules, as well as an IFB system comprised of a IFBT4 compact transmitter and two R1a beltpack receivers. Stolz discussed his use of this equipment and his preference for Lectrosonics’ wireless technology.

“I started using Lectrosonics equipment in the late 1990’s when I was handling sound for TV news,” states Stolz. “I was always impressed with the audio performance of the gear, which continues to improve with each new generation of equipment. Working on Revenge for ABC Studios, we find ourselves in all types of locations and frequently these areas are heavily congested in terms of RF frequencies. I love Lectrosonics’ one-touch SmartTune™ auto frequency select feature, which makes the selection of clean frequencies a simple and reliable experience in crowded RF environments. The ability to change frequencies quickly, easily, and reliably, is really a key to our success in obtaining useable production sound.”

Stolz reports that he uses his two Lectrosonics UM400 transmitters for the wireless booms while the SMV, SMa, and SMQ transmitters are routinely used on the talent. “The small form factor of the SM series transmitters is a terrific benefit,” says Stolz. “Two of the principal actresses— Emily VanCamp and Madeleine Stowe—routinely wear very stylish, form-fitting clothes. The ability to discreetly place the SM transmitters on them without disturbing wardrobe has been critically important.”

Stolz is also very fond of his IFB T4 transmitter and R1a receivers—used in conjunction with a Lectrosonics SNA600 dipole antenna—that form a private line to the director and script supervisor. He’s also using Lectrosonics’ D4 Multi-Channel Digital Wireless Audio Link system, which consists of the D4T digital transmitter and the D4R digital receiver. “I use this to shuttle four pristine audio channels to my boom operators,” he explained. “I wanted the best possible audio quality for this purpose and the equipment has really been exceptional. I’m also using the Lectrosonics Quadra IEM system for my boom operators, as this enables them to adjust the individual levels to their preference.”

When queried about one particular aspect of his Lectrosonics gear that really helps him address a unique challenge, Stolz brought the conversation right back to the most important aspect of all: audio quality. “On this show,” he said, “which has a lot of scheming and conniving among the various actors, there are a lot of scenes where the characters are whispering. The noise floor of the SM transmitters—and all our Lectrosonics gear for that matter—is phenomenal. We’re able to capture useful dialog under very difficult circumstances. There are times when we really have to crank the gain, and I’m always amazed at how clean the audio is. As a result, the sound editors do very little looping.”

Reflecting on his long term experience with Lectrosonics, Stolz offered these final comments, “I couldn’t be happier with the performance of my Lectrosonics gear. The company’s service and support are first rate and the equipment continues to perform beautifully.  I use this equipment every day that I’m working and, quite frankly, it never fails. I go to great lengths to purchase what, I feel, is the best gear for the job, and that’s why I’m so happy to be a Lectrosonics user. I wouldn’t choose anything else.