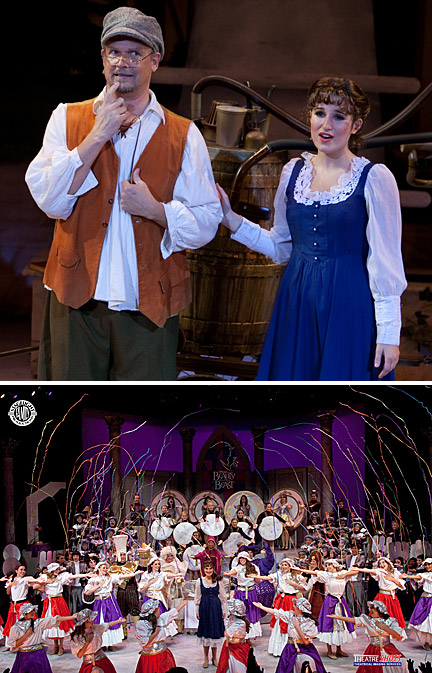 Brea, CA – November 2009… As a non-profit theatre organization dedicated to building a strong and rewarding future for young people in the arts, Stagelight Family Productions focuses on producing high production quality musicals with large casts featuring non-professional actors drawn from the community. These performances consistently sell out and receive rave reviews. Projecting a performer’s voice is an ongoing challenge in any theatrical environments and, with Stagelight’s budding actors, the issue is further compounded. That’s why the theatre group recently invested in a new wireless microphone setup from Lectrosonics.

Brea, CA-based TheatreSHOTS, which supplies theatrical/event photography and A/V services to the communities of North Orange County California, was brought in to assist Stagelight Family Productions with its recent production of the Broadway classic Beauty and the Beast. Bill Warshaw, who with his wife Diane operates TheatreSHOTS, discussed the audio challenges the community theatre group was experiencing.

“Stagelight had been using an older, low end system from a competing wireless manufacturer,” explained Warshaw, “and its sometimes erratic performance, combined with the new FCC regulations spurred us to revisit our wireless situation. As we considered the wireless system attributes that mattered most to the organization, we determined that drop out free performance and durability was high on our list of priorities. With children performers, robust build quality was particularly important. We also wanted our new system to be compact and easy to transport. My research led to Lectrosonics as the best value proposition for the step up we were after.”

Stagelight Family Productions started a fundraiser in May with the goal of fully replacing its antiquated equipment. Ultimately, the group purchased a single Lectrosonics Venue receiver system fully stocked with six VRS receiver modules and accompanied by six Lectrosonics LMa beltpack transmitters. This new equipment employs Lectrosonics’ highly acclaimed Digital Hybrid Wireless™ technology, which uses a proprietary algorithm to encode 24-bit digital audio information with no compression and low distortion into an analog format that can be transmitted in a robust manner over an analog FM wireless link. Countryman E6i headset microphones are used in tandem with the new Lectrosonics system.

Warshaw commented on the new Lectrosonics equipment and the benefits it brings to Stagelight Family Productions. “The new wireless system has been a dramatic step up for Stagelight,” notes Warshaw. “The Lectrosonics equipment is built rock solid and we’ve experienced a noticeable improvement in performance. Equally important is the frequency agile nature of the new equipment. Since we stage productions at multiple venues, the ability to easily configure the best frequencies for any particular location is a huge plus.”

“I’ve also been extremely impressed with the effectiveness of the DSP-based dual band limiters on the LMa transmitters,” Warshaw continued. “Our less experienced performers would sometimes exhibit huge dynamic range in their vocal projection, resulting in distortion with the old system when they hit maximum volume. With the new Lectrosonics gear, we can dial in the packs for the best overall vocal range and let the LMa limiters cleanly handle any ‘shouting’ when an actor gets a bit too excited.”

In addition to the new wireless system’s stellar performance attributes, Warshaw is equally enthusiastic about Lectrosonics customer/technical support services. “Lectrosonics helped guide us with frequency bank selection for our area,” said Warshaw, “and offered to assist with frequency coordination any time we need it. I’ve taken the company up on this offer several times now and really appreciate the assistance.”

Before turning his attention back to new business, Warshaw offered this closing assessment on Stagelight Family Productions’ new Lectrosonics wireless system. “Our production of Beauty and the Beast was a big hit, with eighteen sold out performances,” states Warshaw. “The six new Lectrosonics channels performed wonderfully, and the clarity of the actors using the LMa/Countryman combination was noticeably improved when compared to a few remaining actors outfitted with the older system. Lectrosonics’ sound, reliability, and build quality was exactly what we were after.”

For additional information about Stagelight Family Productions, visit them online at www.stagelightproductions.com.