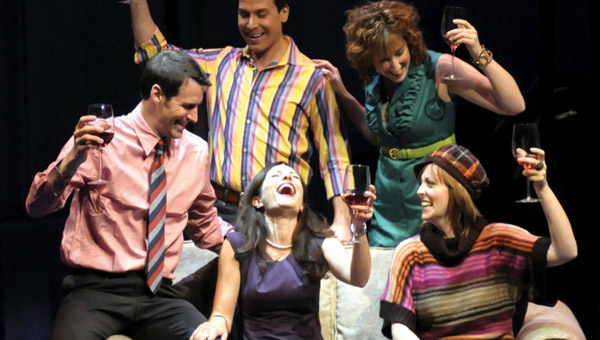 New York, NY… Currently running through December 18th at the Clurman Theatre at Theatre Row in Times Square, Dreamlight Theatre's production of The Extraordinary Ordinary is truly something to sing about. A new musical by Scott Burkell (book and lyrics) and Paul Loesel (music), the show follows a year in the life of six friends - Karen, Kate, Sam, Joey, Bev, and Zach. It is a show about choices… discovering who you are and deciding what’s important in life. It reminds us all about the joys of living in the moment and the true meaning of ‘family.’ Ensuring the audience can understand every last word is no small task for any show and that’s precisely why the cast of The Extraordinary Ordinary is outfitted with wireless microphone technology from Lectrosonics.

Andy Leviss, a freelance audio engineer who is currently serving as the sound designer for the musical, was tasked with all aspects of the show’s sound. Recognizing the importance of speech intelligibility and vocal reproduction, he deployed a 7-channel wireless setup consisting of a Lectrosonics Venue mainframe receiver (fully stocked with six VRS receiver modules), an R400A Diversity Receiver, and a mix of Lectrosonics SMa (single battery), SM (dual battery), and LMa beltpack transmitters. All equipment utilizes Lectrosonics’ acclaimed Digital Hybrid Wireless™ technology. Leviss discussed the challenges of the project.

“The Clurman Theatre is an intimate, 99-seat venue,” he explained. “As such, I wanted to ensure absolute transparency when it came to the wireless microphone technology —both sonically and visually. The beauty of the Lectrosonics equipment is its sound quality. Unlike many competing brands, the Lectrosonics Digital Hybrid equipment doesn’t use companding, so the result is a full, natural sound that’s right on par with a cabled mic. Equally important, the SM and SMa transmitters are very small, and this makes it easy to hide them on the talent.”

Leviss reports the transmitters were placed in Spandex pouches and then strapped to the small of the talent’s back, with the microphone cable running up the back, exiting the wardrobe and into the hair, where Countryman B3 lavaliere microphones are hidden. “For one scene,” Leviss notes, “we had to add a special pouch to a shirtless actor’s boxer shorts. The SMa transmitter’s small size made it easy to hide and made this situation completely feasible. I also love the transmitters’ one-piece assembly with membrane switches. This is a great feature because I don’t have to wrap them in latex or plastic sleeves to protect them from perspiration.”

The Extraordinary Ordinary started its run on November 29th. Since the show’s start, Leviss reports nothing but smooth sailing in terms of Lectrosonics’ wireless performance. “Everything has been working really well and the show sounds wonderful,” he notes. “Speech intelligibility is excellent and the clear sound is exactly what I wanted. The small size of the transmitters makes them easy to conceal and they’ve performed without the slightest hiccup. When it comes to the show’s sound, it’s all about transparency. Nobody should notice the system’s presence until I shut it off, and that’s exactly how it’s all been working out. Summing up… the producer is thrilled.”

For additional information about Dreamlight Theatre, visit them online at www.dreamlighttheatre.org.