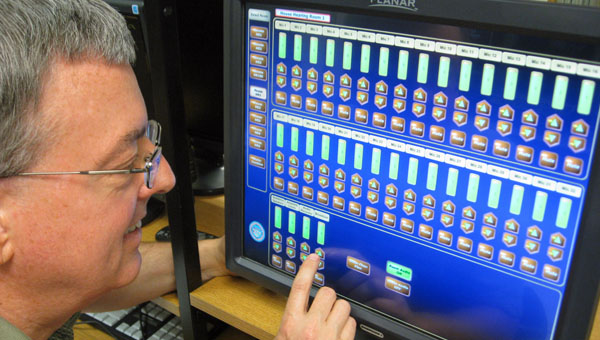 Phoenix, AZ – May 2013… After struggling with poor audio quality, feedback, inconsistent microphone levels and a variety of other issues, the Arizona State Legislature—home to the Arizona Senate and Arizona House of Representatives—decided enough is enough. Recognizing that a high degree of speech intelligibility is essential if members of the legislature are to communicate effectively, the decision was made to rectify the situation—and at the heart of the remedy: ASPEN digital audio processors from Rio Rancho, NM-based Lectrosonics, all controlled by Intent Digital’s Energize Dynamic Control System.

Phoenix, AZ-based Intent Digital, a design / build firm that focuses on system design and engineering as well as the design and development of distinctive control systems used in AV projects for government, medical, houses of worship, and institutional clients, was contracted to handle the facility upgrade that, among the many pieces of equipment deployed, included Lectrosonics ASPEN SPNConference interface and power amplification units used in conjunction with ASPEN SPN2412 24 input / 12 output audio processors. Bob Ginger, Technology Partner with Intent Digital, discussed the nature of the project.

“The two ASPEN systems—one each for the Senate and House of Representatives—are interfaced with our firm’s Energize Control System,” states Ginger. The design commenced in December 2012 and installation began in January 2013. The project had to be done while the Legislature was in session, so much of the work was performed on Fridays and Saturdays when meetings were not scheduled. The first set of mixers were activated in early February and the rest were brought on line progressively. The last set was activated at the end of March.”

Ginger described the functions the Lectrosonics ASPEN processors handle for the Senate and House, “In both legislative bodies, these systems handle all audio for the various public committee hearings and voting sessions. The Senate has four hearing rooms while the House has five. Both Aspen systems are controlled as one system via the Intent Digital Energize control system 19-inch touch panel, which is located at the Arizona Capitol Television Master Control. Furthermore, there are Energize single gang touch panels in the Senate hearing rooms for basic room audio control. The Aspen system handles mixing of wired and wireless microphones in all rooms, as well as telephone conferencing, mix minus, press feeds, assisted listening feeds, recording and broadcast feeds, and room combining functions.”

“The ASPEN system is tailor made for this type of application,” Ginger continued, “as its architecture is optimized for matrix mixing, equalization, feedback elimination, and auto-gain without having to program a DSP project.  Having 48 mix busses available to create a multitude of program and mix minus feeds that can be sent to any combination of outputs at differing operating levels is a very powerful aspect of the ASPEN processors. The Energize control system operates seamlessly with the ASPEN processors to create any project configuration. The ASPEN system can store the base default operating settings and Energize keeps track of the dynamically changing parameters.  Therefore, if the system has to be restarted, Energize will set all the ASPEN levels to the last good setting.”

Before turning his attention back to the day’s business, Ginger offered these final thoughts, “With the Lectrosonics equipment, it’s easy for our engineering team to create mixer configuration notes that engineering techs can use to quickly configure the ASPEN units. We don’t have to go through the DSP programming effort to create a project. Energize easily communicates with the ASPEN systems over either a serial connection (RS-232) or Ethernet. We created live mixer touch panel control pages for each room, some of which have as many as 32 microphones. The pages also contain output controls for room speakers, broadcast, recording, and assisted listening feeds. We are using quite a bit of mix-minus capability for speakers over the meeting participants heads, which is working very nicely for consistent sounding audio throughout the various rooms. The powerful Energize control system does not require any software coding or compiling.  Instead, it contains an impressive set of point and click tools to quickly select how source, output, mix bus, or crosspoint gains or mutes are to be controlled. This makes it very easy to gang any combination of audio mixes to an Energize control object. With that said, I’ll summarize the project this way— the audio sounds fantastic, rich and full, without feedback.”

To learn more about Intent Digital and their Energize Dynamic Control System, visit the company online at www.intentdigital.com.