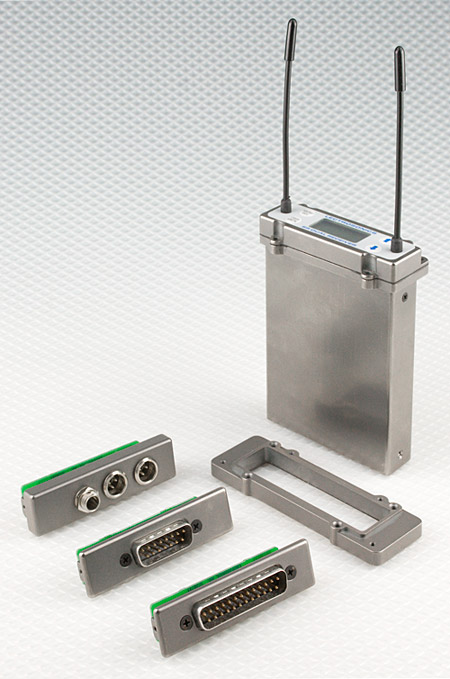 Two diversity modes are offered in the SR. SmartDiversity™ reception is employed by independently combining antenna phase for each receiver channel. Alternately, the two channels can be used together in “True Diversity” Ratio mode as a single receiver. Graphic spectrum scanning provides quick and easy location of clear operating frequencies for interference-free operation.

The two Digital Hybrid Wireless receivers inside the SR offer 256 frequencies each in one of nine available blocks, and operate with any of the Lectrosonics 400 Series transmitters without a compandor in the audio path. In addition, compatibility modes also facilitate operation with Lectrosonics 100 Series, 200 Series, and IFB analog systems, along with analog transmitters from two other manufacturers. Transmitter battery strength is monitored in the SR when using compatibility modes for 200 and 400 Series transmitters.

While mounted on a camera, the SR is splash resistant—thanks to sealed membrane switches and LCD, along with a special gasket covering the slot opening. The SR can be used with slot-equipped Sony, Ikegami, or Panasonic professional cameras via optional connector kits. A stand-alone kit is also available that enables using the SR out of the camera slot, powered from external DC, and provides two locking mini-XLR analog audio outputs.

Receiver audio frequency response is 30 Hz to 20 kHz, ±1 dB, while overall system response is determined by the transmitter and microphone element used. Signal to noise performance at the receiver output is 107 dB before limiting.

The new Lectrosonics Dual-Channel Slot-Mount ENG Receiver carries a MSRP of $2,520. Availability is expected for early 2008.