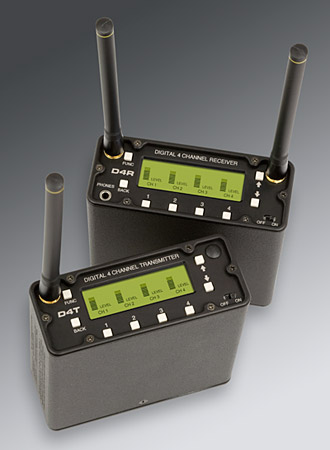 Rio Rancho, NM… Lectrosonics, recognized the world over as a leading manufacturer of wireless microphone systems and audio processing products, will be introducing a new product at NAB that pushes the envelope of what can be done with audio signals over a wireless link. The new D4 Multi-Channel Digital Wireless Audio Link system, consisting of the D4T digital transmitter and the D4R digital receiver, shuttles four pristine audio channels over a range of 100 feet or more using the ISM band between 902-928 MHz for freedom from DTV (digital television) interference. Applications for the D4 system include video and film productions using a wireless hop from a bag system or cart back to a camera, audio relay systems for installed sound, and delayed loudspeaker systems.

These compact, portable units rely on the fully-digital DQPSK (Differential quadrature phase-shift keying) modulation scheme and a proprietary digital audio encoding algorithm developed by Lectrosonics. Up to four D4 systems can be operated simultaneously on separate 5 MHz channels within the ISM band and additional systems can be added by engaging up to eight different ID codes within each separate channel for a total of up to 32 systems. High quality, 24-bit converters and 48 kHz sample rate ensures that the audio quality meets or exceeds the demands of any video, audio, or film production application.

Both the D4T digital transmitter and D4R digital receiver feature a large LCD for ease of setup and signal monitoring. Tactile switches on the front panel allow for confident selection of programming and monitoring functions. The D4T transmitter accepts up to four analog inputs via TA3F mini XLR connectors on the back panel, while two of these connectors can also be switched to accept AES/EBU dual-channel digital input signals. The D4R diversity receiver includes a headphone monitoring output on the front panel. Signals from the receiver are output via four TA3M mini-XLR connectors, two of which can be switched to provide dual-channel AES/EBU digital outputs. Both units include a mini USB connector for future firmware upgrades. Construction is the Lectrosonics standard all-metal chassis with durable powder-coated and anodized finishes.

Key system specifications include a frequency response of 20 Hz to 20 kHz, ±1dB; THD: 0.05% at 1 kHz, and the system’s dynamic range is greater than 100 dB before limiting.

Lectrosonics new D4 Multi-Channel Digital Wireless Audio Link system is expected to be available in the third quarter of 2008. Pricing is to be determined.