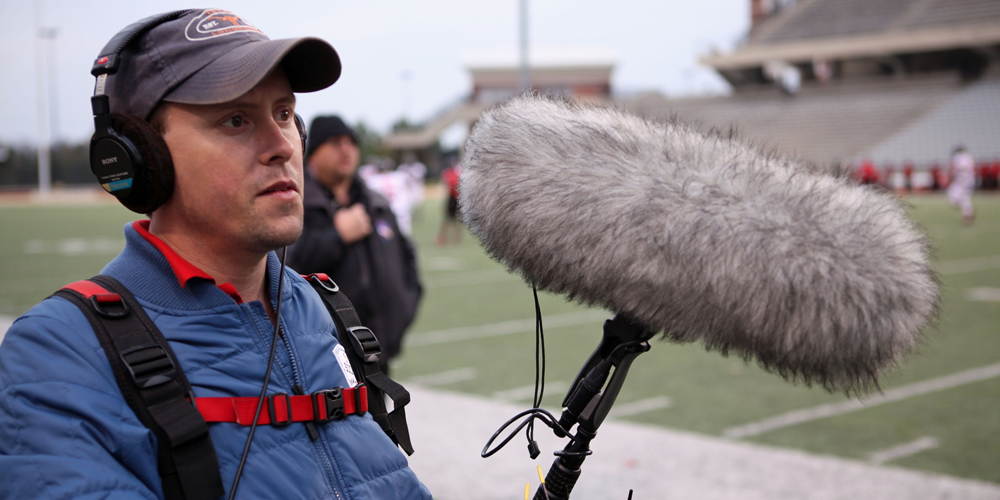 San Antonio, TX – June, 2014… Football—it’s a hugely popular sport for people of all ages. And in Texas, where everything is BIG, there’s even a league for the little guys. That’s right. We’re talkin’ 8 and 9 year olds! Friday Night Tykes, on the Esquire Network—an NBCUniversal network— is a TV show that focuses on the competitive Rookies division in the San Antonio region of the Texas Youth Football Association. The series follows five different teams, both on and off the football field. There’s a lot of action, and Digital Hybrid Wireless® technology from Rio Rancho, NM-based Lectrosonics helps capture the excitement.

Austin, TX-based Location Sound Engineer John McKallip is one of two lead sound mixers on the show. Working with Allen Green from San Antonio, these two audio pros track and capture all the action and ensure the sound quality is everything it needs to be. McKallip’s track record is impressive. In recent years, he’s run sound for Amy Poehler’s Smart Girls at the Party, Ironman World Championship Live coverage, CBS’ 60 Minutes, and the NBC Winter Olympics in Sochi. He discussed the challenges of Friday Night Tykes.

“Weeks were filled with football practices and home life,” McKallip explained “Then each week ended with a game day. Each pack needed to take in multiple talent mics, send a stereo mix to their camera man, send a reference track to a smaller producer camera, and provide IFB for up to four producers. To address these requirements, every pack had some combination of Lectrosonics UCR411a receivers, an SRa or SRb dual channel slot mount ENG receiver, and a few SMQV Super-Miniature transmitters. On the outgoing side, the setup typically included the mixer feeding two UM400 beltpack or SMV Super-Miniature transmitters over to an SRb dual channel receiver mounted to XDCAM 800 cameras for the stereo mix.”

McKallip also reports that the IFB setup included either a Lectrosonics T4 IFB transmitter or an LMa beltpack transmitter set to IFB compatibility mode feeding Lectrosonics R1a IFB receivers. This setup was used primarily by the producers, but was sometimes mounted to a secondary camera to feed a reference sound. “We made use of the programming feature so the producers could easily switch their unit to hear the right mix of characters.”

When queried about those attributes that make the Lectrosonics equipment so well suited to this application, McKallip offered the following, “Lectrosonics is the total package. The transmitters—the SMQV’s—in this case, have a wide dynamic range so that you get the full color of the lavaliere you’re using. And Lectrosonics’ build quality is terrific. The Lectrosonics units have always had a reputation for being built like tanks. As we transitioned from UM400a to SMQV transmitters, we discovered that we get the same toughness with more features and easier to operate advanced features—including power output.”

“The Lectrosonics SRb receivers were often used as camera hops,” McKallip continued. “These units are a welcome bit of relief for the camera men who have been accustomed to using two larger standalone receivers hanging off the back of their camera for so many years. Further, the range of these units is remarkable.”

The compact form factor of the Lectrosonics SMQV transmitters has proven to be yet another benefit on the show. “We mounted mics everywhere,” McKallip said. “The small size of the SMQV transmitters gave us infinite options while rarely being seen. And for those times when we simply couldn’t get to those transmitters, we could use the Lectro Remote app on our iPhones to put the unit on standby.”

As he prepared for another day in the field, McKallip offered these parting thoughts on his Lectrosonics experience. “We learned a lot during our first season of Friday Night Tykes,” he said. “This is a show with numerous unique challenges. I’ve been speaking with Lectrosonics as we get ready for season two, so that we can fine tune our audio workflow to ensure we’re using the best options possible from their product line. During the recent NAB show, I spoke with several people, including the president, and everyone offered some really useful suggestions to help take our production up a notch. Lectrosonics offers great products with exceptional support—and you can’t ask for more than that.”