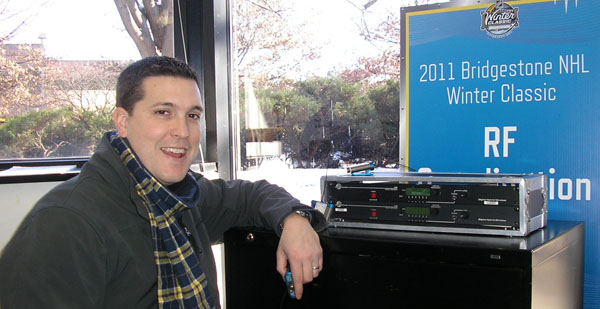 Herndon, VA… NHL hockey is, without question, not a sport for the timid individual. With an abundance of action that encompasses skilled maneuvering over the ice and, frequently, brutal collisions and one-on-one confrontations, everything about this sport demands strength and durability. Capturing the action for an in-depth look at ice hockey is never easy. Giving the viewer an up-close-and-personal perspective by being able to listen in on the players, coaches, and referees is an even more challenging matter. This requires robust wireless microphone performance as only Lectrosonics can provide and a hefty dose of audio expertise. Such was the mission of Bexel, a unit of the Vitec Group’s Services Division, as they assisted HBO Sports on a recent look inside one of the NHL’s great rivalries: the Pittsburgh Penguins versus the Washington Capitals.

Ted Marvin, Audio Project Engineer, Bexel, recently found himself at the center of this massive undertaking. He described the project. “HBO Sports’ 24/7 PENGUINS/CAPITALS: ROAD TO THE NHL WINTER CLASSIC was a 4-week, all-access series that followed the two teams during the month of December,” said Marvin, “including the highly anticipated 2011 Bridgestone NHL Winter Classic at Heinz Field—played outdoors in Pittsburgh on New Year’s Day. To capture the dialog among the players, coaches, and referees, we deployed a sizeable Lectrosonics wireless setup that was divided among multiple ENG crews.”

The wireless equipment included sixteen Lectrosonics SMD Super Miniature beltpack transmitters and sixteen UCR411 receivers. This equipment was used by four ENG crews—two crews per hockey team— that followed the players and referees. Each crew had responsibility for four wireless microphones. Additionally, six Lectrosonics UM400 beltpack transmitters were used for camera hops from the audio technician’s bag feeding audio into the cameras. These were paired with additional UCR411 receivers. In all, there were twenty-two pairs of transmitters and receivers.

As a means of providing isolated individual record tracks for use in subsequent editing, Marvin operated a redundant receiver setup consisting of several Lectrosonics Venue mainframes stocked with VRT receiver modules. “There were four Venue racks,” Marvin explained, “with two Venue racks assigned to each team. Each team had eight mics, so there was a full Venue mainframe with the second Venue having two additional VRT receivers.” The Lectrosonics Venue accepts six receiver modules. All of the equipment used employs Lectrosonics’ acclaimed Digital Hybrid Wireless® technology.

Marvin discussed the challenges of the project, “This series captured activity in the locker rooms, on the field, at practice, and as they travelled. This was a complete perspective of all that’s involved in the world of professional NHL hockey. HBO placed microphones on players, coaches, refs, and used additional mics for wireless effects. In this environment, there was a lot of perspiration, rough physical contact, and at the Winter Classic, it even rained. It was essential that our wireless equipment be durable and resistant to moisture, have high power output/range to handle the distances between the players and the receivers, and provide long battery life so as to not interfere with the actual games. The SMD transmitters with Lithium batteries were the perfect choice.”

Marvin was equally complimentary of Lectrosonics’ frequency agility in crowded RF environments. “We wanted all the wireless mics to operate within the same frequency block,” he said. “This way, an ENG operator could simply change the receiver frequency as he moved from one player to another. All of the mics were all operating in frequency block 21. To pull this off, we needed wireless equipment that could provide a wide range of frequencies within one block. The Lectrosonics SMD does a great job with its circulator/isolator circuitry on the output, and this minimizes RF intermodulation—making it possible to reliably operate on more frequencies within any given block.”

Marvin was particularly impressed with the high performance limiter and related audio circuitry found in Lectrosonics equipment. “Sometimes, there was excessive crowd noise and the electronics maintained a very clean signal. Other times, such as in the locker room or on the bus, it was relatively quiet and we needed a low noise floor to properly capture the audio. This all had to happen without having access to the gain controls on the transmitters. Here too, Lectrosonics’ performance was exceptional.”

With the project now in the rear view mirror, Marvin reflected on the outcome. “Everything turned out wonderfully,” he reports. “For HBO, working with the NHL was a new experience, so having quality wireless microphones was not only important in terms of their own production, they were also eager to demonstrate to the NHL that all this was feasible without being disruptive to the NHL’s operations. Reports indicate the NHL folks were very pleased with HBO’s production. When two large organizations like these give you the thumbs up, you know you made the right equipment choice.”

For additional information about Bexel, visit the company online at www.bexel.com. To learn more about the Vitec Group, visit www.vitecgroup.com.