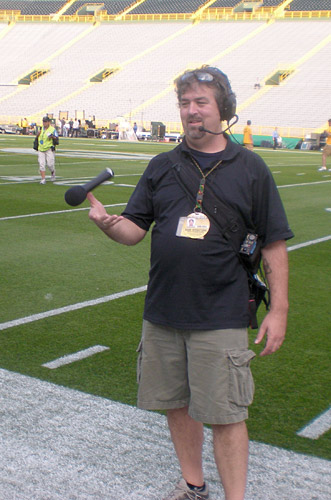 Green Bay, WI… As one of the NFL’s premiere franchises, the Green Bay Packers have a solid championship record— 13 non-losing seasons in a row starting in 1992— and are the only non-profit, community-owned major league professional sports team in the United States. When it’s game time at Lambeau Field (the team’s home), there’s plenty of excitement, lots of sports fans in attendance, and an overwhelmingly high level of wireless technology keeping the lines of communication open. For the start of the current football season, a new wireless system was deployed at the stadium. To ensure first-rate audio quality, excellent range, and the freedom to adapt to evolving RF conditions, the manufacturer of choice was Lectrosonics.

Kimberly, WI-based Arrow Audio, Inc. was contracted to handle the installation of the new wireless system. Arrow Audio is a design/build firm handling audio and video systems consultation, design, and installation for a wide range of projects. Gary Trenda, Arrow Audio’s Lead Systems Designer, discussed the challenges of the project.

“On game day, an NFL stadium can have as many as 400+ wireless channels in use,” explained Trenda. “In a congested RF environment like this, finding a system that would work reliably was a major concern, as was audio quality and range. The NFL has a Game Day Frequency Coordinator (GDC) who assigns frequencies to the various wireless users so that they don’t interfere with one another. For this installation, the GDC also recommended a preferred frequency range.”

“To accommodate the GDC’s recommendations,” Trenda continued, “the ability to swap different receiver modules for alternate frequency blocks and the ability to easily dial in frequencies became crucial. Further, this capability enables us to adapt to changing conditions should it become necessary. These requirements strongly influenced our purchase considerations.”

“The Lectrosonics gear outperformed the other systems,” said Trenda, “primarily because of the robust RF performance and the audio quality of their Digital Hybrid Wireless technology. The technicians from Made Ya Look preferred the sound of the super cardioid capsule on the UT transmitters and were particularly impressed with the UT’s 100 mW transmit power, which provided exceptional range. It’s not uncommon for the talent to be on the opposite side of the stadium from the receivers. The range and solid reception of the system was very impressive.”

With the new Lectrosonics system in place and operational, Trenda reports that everything is working exactly as they had hoped for, and he credits Lectrosonics’ customer/technical support services for much of the project’s success. “The team at Lectrosonics was very helpful,” reports Trenda. “Lectrosonics Field Sales Representative Matt Robertson provided a demo system and helped us specify the proper equipment. After our purchase, Karl Winkler (Director of Business Development) helped guide us through the frequency selection process. Since the installation, the system has worked flawlessly. The audio crew from Made Ya Look has been very pleased with the new equipment, especially with the improved audio quality and RF reception. It all just works seamlessly.”

For additional information about Arrow Audio, Inc., visit the company’s website at www.arrowaudioinc.com.