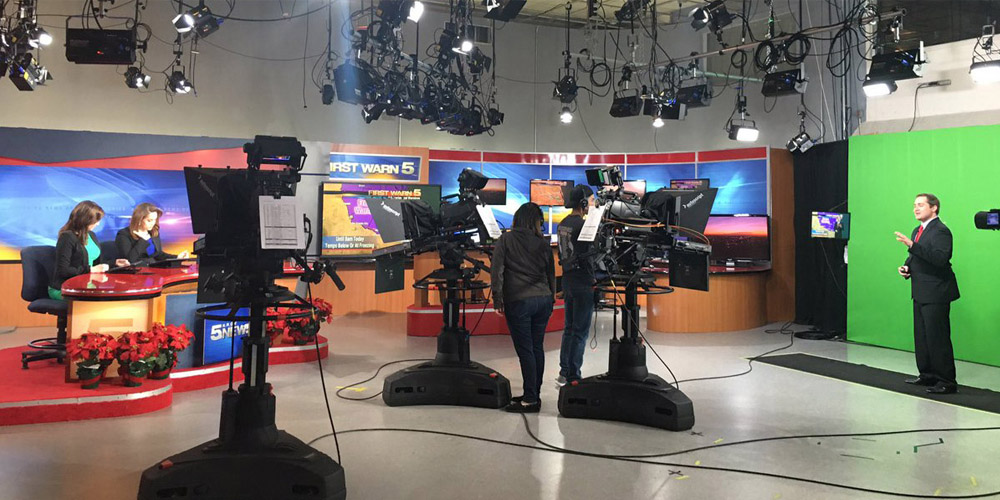 “We like to give our workers the best tools to get the job done and we will continue to stick with something we know is going to work. That’s why we choose Lectrosonics.”

“Now that we’re doing more content, we’ve given the L-Series to our photographers with the smaller cameras,” says Israel Alfaro, Operations Manager and an award-winning photojournalist who has worked at KRGV for nearly 25 years. “The L-Series kit has three channel blocks you can switch from if you’re having any type of issue, which is pretty awesome. We also use the shoe adapter from the kit.”

The new Spanish language newscast, is currently being filmed in studio A at KRGV, uses the Lectrosonics IFB system with 6 receiver packs, and the lav mics are on 6 LMb transmitters with a Venue receiver system. “Our news cast has a lot of moving positions and we go live a lot in our studio, so we use Lectrosonics wireless belts to make things easier,” Alfaro says.

In Studio B, Alfaro is about to finish adding the Lectrosonics Duet IFB system to their existing collection of HM transmitters and Venue receivers. “The Duet is pretty cool because it transmits everything separately; each person can talk to each other separately within the studio instead of everyone speaking under one line.” As soon as the system is fully installed the Spanish newscast will make the transition to Studio B. All of the programs on KRGV use Lectrosonics equipment, according to Alfaro, some of which they have had for many years. With the FCC changes, he plans on continuing to replace his current Lectrosonics gear with Lectrosonics newer, smaller receivers. “KRGV has used Lectrosonics for a long time and we still have much of our original equipment because it’s so reliable and works amazingly well,” says Alfaro. “And we’ll be adding even newer Lectro gear.”

Before becoming Operations Manager of KRGV, Alfaro started his career as a cameraman working in production and commercials. He then moved onto photojournalism where he eventually became chief, and was first introduced to Lectrosonics equipment. Alfaro’s biggest challenge came at the beginning of his career with KRGV, which is located in Rio Grande Valley, Texas, where there was constant interference from nearby radio stations in Mexico. Once the station went with Lectrosonics, the issue was finally resolved.

“Lectrosonics gets great connection everywhere; I love my job, but I love it much more when I know that equipment is going to work,” Alfaro says. “It’s important to work smart, and we can’t have trouble during a live broadcast,” he says. In fact, Alfaro sent his staff out with Lectrosonics gear to Houston for the live broadcast from Hurricane Harvey. “We like to give our workers the best tools to get the job done and we will continue to stick with something we know is going to work. That’s why we choose Lectrosonics.”