Great performance and the best gear unite for one memorable event 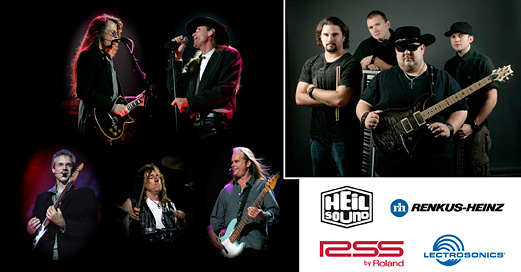 Anaheim, CA – January 2008… While Winter NAMM is always one of the most highly anticipated events in the music and sound industry, this year’s annual gathering has a new twist that is certain to attract attention. Heil Sound, Lectrosonics, Renkus-Heinz, and Roland Systems Group—all top tier organizations in their respective fields—are co-sponsoring a party that will feature first-class musical performances delivered through some of the most innovative equipment available to the professional audio community.

The party is scheduled to take place on Saturday, January 19th, 2008 at the Sheraton Park Hotel—right by the Anaheim Convention Center, making it an easy walk for all who wish to attend. The party will start at 7 PM and feature the “Loud and Proud” music of the Johnny Hiland Band, Orange County rockers Unit 287, as well as Eagles tribute band Hotel California. Additionally, expectations are high that some of Bob Heil's industry friends will be making guest appearances.

The sponsors have planned this event as an opportunity to enjoy some great music, visit with industry friends, and experience some of the most cutting-edge technology our industry has to offer in a real-world setting. Lectrosonics will provide the backline and vocal wireless systems, including their IS400 guitar wireless units and UT handheld transmitters. Loads of cabled Heil Sound mics, including the new PR 35 large diaphragm dynamic, will be on stage as well.

The event will also make use of several advanced technologies from Renkus-Heinz, a recognized leader in the design and manufacture of sound reinforcement systems. The FOH PA will consist of 12 PN102/LA powered line arrays in a L/R (left/right) configuration, along with 4 DR18-2 powered subwoofers. The entire PA will be networked using RHAON (“rayon”), the Renkus-Heinz Audio Operations Network. Attendees will be able to see RHAON software in action via a projection on the rear wall. System techs will use the new EASERA SysTune Live Sound Measurement Software to optimize the DSP onboard each RHAON-Empowered loudspeaker both before and during the event. Developed by the AFMG Ahnert Feistel Media Group, EASERA SysTune represents a remarkable step forward in its ability to take accurate measurements of room acoustics in real time, with ordinary program material and while the audience is present. The Lectrosonics TM400 Wireless System for Test and Measurement will be used as an integral part of the system.

At FOH (front of house), music will be mixed on the new and highly acclaimed RSS M-400 V-Mixing System from Roland Systems Group. The 48-channel all-digital console features 16 buses, channel and bus DSP, 4 stereo FX processors, 4 graphic EQs, built-in stereo recording and playback, and a built in multi-channel split port—facilitating one of the most versatile consoles of its kind for both live sound and recording applications. Additionally, the company’s Digital Snake system, which facilitates audio transport of up to 40 channels (bi-directional) of high quality 24-bit/96kHz audio over one standard Cat5e cable will be used for all primary audio signals during the evening’s performance and is expected to dramatically enhance the sound quality of the combined system.

Karl Winkler, Lectrosonics Director of Business Development, who is spearheading the coordination of the party, commented on the companies involved in this endeavor. “The combination of products used in support of the musical performance at this party amounts to what may very well be the most advanced live sound reinforcement system currently available. Everyone involved in this effort is committing considerable resources, expertise, and time to make this party happen. I’m confident this event will be one rockin’ party that will also attract the attention of numerous industry heavyweights because of the technology being utilized.”

The event’s co-sponsors will be handing out passes to the party at their respective NAMM exhibits (Heil Sound: Hall A, booth #6849, Lectrosonics: Hall E, booth #1206, Roland Systems Group: Hall D, booth #2664). The party will include a cash bar.