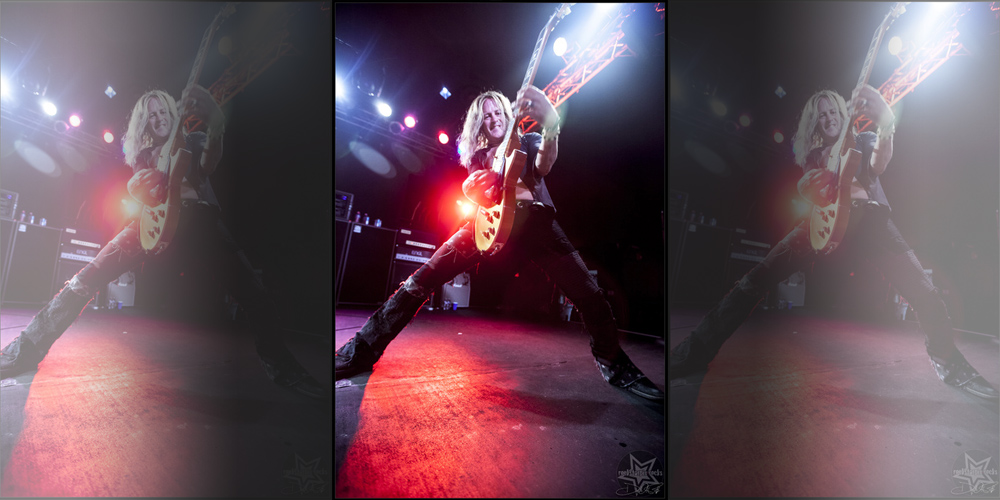 “I literally cannot tell the difference between Lectrosonics wireless and a guitar cable. In fact, I think the Lectro might even sound a little better!”

Los Angeles, CA (March 26, 2017) ― Doug Aldrich is a veteran journeyman of heavy metal. Since 1983 he has slung the six-string in some of the world’s hardest-rocking bands including Dio and Whitesnake, and currently plays in supergroup The Dead Daisies as well as his longtime personal project Burning Rain. Like most guitarists, he was rightfully skeptical that a wireless system could carry all of his tone and technique with full fidelity — until he discovered Lectrosonics. Recently, he took some time to share how his Digital Hybrid Wireless® LT transmitter and LR receiver have replaced his guitar cable — and how he couldn’t be happier about it.

“I had tried wireless when I was playing with Ronnie James Dio,” recalls Aldrich. “The first system, which was not Lectrosonics, compressed my sound so much and the tone wasn’t even close to a guitar cable. Ronnie had asked me to go wireless because he didn’t want to be tripping over people’s cables onstage, but when he listened he said, ‘Never mind. Go back to a cable. I’ll work around it.’ Then, throughout my 12 years with Whitesnake I didn’t even think about wireless.”

His epiphany would come in 2016. “That was when I joined The Dead Daisies, which includes guys who’ve played with Whitesnake, Journey, Mötley Crüe, and other top bands,” he recalls. “We played shows and festivals as a supporting act, not a headliner. That meant we couldn’t just do whatever we wanted with, like, 50-foot cables onstage. I had to find a better wireless rig, and bass player Phil Soussan — with whom I’d been playing a Las Vegas show called Raiding the Rock Vault — said, ‘Doug, you have to check out Lectrosonics. I use it, and it’s what the tone-obsessed guitar guys like Slash and Jerry Horton are using.’”

Soussan procured a demo LT transmitter and LR receiver pair for a show at Las Vegas’ Tropicana theater, and Aldrich was astounded. “During sound check I walked out into the audience area as far as my cable would reach,” he recalls. “Then, Phil swapped in the transmitter and receiver. I literally could not tell the difference between Lectrosonics wireless and a guitar cable. In fact, I think the Lectro might even sound a little better!”

Aldrich goes on to describe the setup he has been using ever since: “The LT clips onto my guitar strap, and a short adaptor cable goes from the ¼-inch guitar jack to its little five-pin connector. The LT has a wide enough gain range to deal with the high-impedance output from a guitar. I use a medium setting and it’s plenty hot enough — and I don’t even have active pickups or anything like that. Best of all, it doesn’t compress or water down my tone even a little.”

If there are any problems with range or signal strength, a guitar player will be the first to notice it the instant the pick hits a string. Not so here, says Aldrich. “The LT has two output power settings: 50 and 100 milliwatts. On 100, I could walk to the back of a stadium and still not hear any issues.” He also praises the LT’s battery life: “If I were playing for four hours solid, I might have my tech swap out transmitters during the drum solo, but so far, I haven’t ever had to do this at any actual show.”

On the receiving end, Aldrich’s LR occupies the first position on his effects pedalboard and is powered via an AC supply thanks to a Lectrosonics accessory. Here, the typical challenges of sharing the stage involve staking out a slice of bandwidth for oneself in an environment where the airwaves are already saturated with RF. As Aldrich describes, the LR makes this task painless.

“In festival situations or where you’re an opening act, the headliner is first in line to claim a big chunk of wireless frequencies,” he explains. “You can’t use those unless you want to hear them checking their guitars while you’re playing! So, their people tell you what range you can use, and it’s very easy for the LR to find something within that because it has this automatic smart-tuning routine. Then it shakes hands with the LT and you’re good to go.”

How well does this perform in practice? “I have to say that whatever and wherever the gig, in the time I’ve been using Lectro I have not experienced a single dropout nor heard any crosstalk from stuff on other channels.”

Asked if he plans to evangelize Lectrosonics to his bandmates the way Phil Soussan did to him, Aldrich only says, “I don’t really have to. They hear my rig and they’re sold. The Dead Daisies have all bought multiple units.”

Being a guitarist first and foremost, Aldrich wraps up by re-emphasizing the all-important matter of tone. “Not only is Lectro the most stable system I’ve ever used, but everything guitarists usually don’t like about wireless is simply not there. What is there is all my tone — all the top end, all the bottom, all the presence. I can come forward in the mix just as if I were using a cable, and the response when I play is just so immediate. That’s what Lectrosonics has got nailed.”