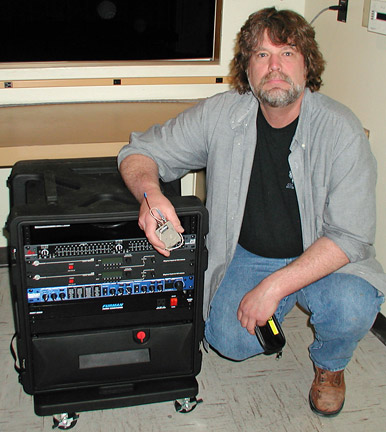 Chadron, NE… When it comes to wireless microphone systems, nothing is more irritating than dropouts, interference, and other annoyances that compromise a performance. Such was the case at Chadron State College’s Memorial Hall Auditorium, the college’s main on-campus performing arts venue. After deciding enough was enough with their existing wireless equipment, Chadron State’s theater department began the search for a viable solution that would facilitate the freedom of movement they so dearly wanted to maintain while achieving clean, clear audio performance they could count on. They found what they were looking for with a wireless setup from Lectrosonics.

Scott Cavin, Assistant Professor of Theater at Chadron State College, who serves as the theater’s A/V administrator in addition to his teaching responsibilities, commented on the challenges they experienced prior to the acquisition of their Lectrosonics equipment. “We’re located in a somewhat isolated area and, as a result, Memorial Hall is the main performing arts venue with a reach that extends well beyond the immediate campus. You simply cannot teach or perform with a system that compromises everything you’re trying to accomplish. Memorial Hall has some rather unique characteristics that created difficulties with our previous system. We were constantly battling dropouts, interference, and other RF issues. Compounding this situation, the body pack transmitters we had simply didn’t perform very well under everyday use. They just weren’t particularly robust.”

Cavin had his first encounter with Lectrosonics wireless equipment during a visit from a touring repertory theater company. He remembers being impressed with the fact that the performers didn’t seem to encounter any of the obstacles he routinely wrestled with. “I was speaking with their sound engineer,” recalls Cavin, “who was very enthusiastic about the Lectrosonics equipment they had—particularly with the ease of changing frequencies on the system when circumstances required. During this conversation, I was admiring how solidly built the equipment appeared. Observing their success motivated my colleagues and me to investigate Lectrosonics further.”

The quest for a dependable wireless system led Cavin to Newton, MA-based Talamas Broadcast, an authorized Lectrosonics dealer that specializes in wireless communication and RF coordination. Dave Talamas, president and CEO of the company, reflected on the situation at Chadron State. “Based upon the information I received,” said Talamas, “I felt very confident the Lectrosonics Venue system would serve them well. Lectrosonics sound quality and reliability consistently impresses me. Being a modular system, the Venue receiver can be easily expanded as requirements evolve, and the MM400c transmitters they inquired about—being water resistant—are as solidly built as it gets. In addition to being able to withstand any perspiration that may occur from wardrobe and hot lights, these transmitters can take some pretty rough handling.”

Chadron State College’s new Lectrosonics system consists of twelve channels. The Venue receiver is a single space modular system that can be stocked with as many as six Lectrosonics VRS or VRT receiver modules. Hence, all twelve channels are housed in just 2RU of rack space. Among their key attributes, the twelve MM400C water resistant miniature transmitters feature a waterproof Power/Mute switch, 256 synthesized UHF frequencies, and a DSP based pilot-tone signal that eliminates squelch problems. Both the receivers and transmitters employ Lectrosonics legendary Digital Hybrid Wireless™ technology.

Cavin reports they received their Lectrosonics equipment last fall and first placed it into service in October 2007 for Chadron State College Theatre Department’s production of Frank Langella’s classic comedy, Cyrano. “We’ve been very pleased,” Cavin states enthusiastically. “We’ll use this equipment on a wide range of theater productions, musicals, band concerts, speaking engagements, and with a number of touring ensembles that are scheduled to perform here. Lectrosonics’ sound quality is first rate and the build quality of the transmitters is particularly impressive. Installation of the equipment went without a hitch and we were able to configure the system by ourselves. Our Lectrosonics equipment provides a level of confidence we’ve never known before—it’s as though we’re using wired microphones.”