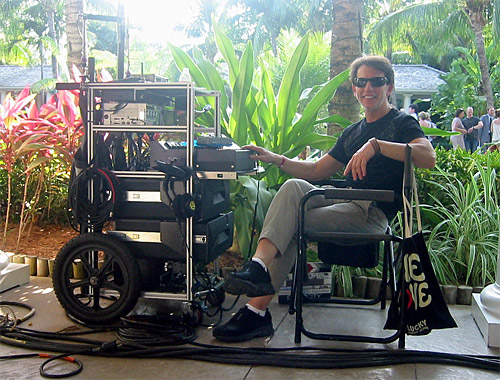 New York, NY – June 2009… Between wardrobe considerations, challenging set conditions, and production schedules that seem to be constantly shifting, the location sound business involves an innate ability to adapt. These variables become all-the-more compounded when working in metropolitan areas like New York City, where crowded conditions, limited space, and radio frequency interference combine to complicate matters even further. Welcome to Michael Barosky’s world! As a New York-based production sound mixer who has worked on major film and TV projects for the past 15 years, Barosky spends his days—and nights—in the trenches, slogging it out against every conceivable obstacle one could possibly encounter in the quest for high quality audio. And to help him make it all happen, Barosky relies on his arsenal of Lectrosonics wireless equipment.

Barosky’s list of film and TV credits is impressive. He’s worked on major films such as the romantic comedy-spy thriller Duplicity, the drama Michael Clayton, as well as the TV shows Gossip Girl and Law & Order. Throughout his career, Barosky has used a variety of Lectrosonics wireless equipment, including the company’s UCR411A Digital Hybrid Wireless® receivers and SM Series transmitters. Recently, he made the switch to Lectrosonics’ critically acclaimed Venue Series receiver system and used the new setup on his most recent project—the Sony Pictures film Did You Hear About the Morgans?

“Scheduled for release during the 2009 Holiday Season, this film is a romantic comedy about a high-powered, estranged New York couple, played by Hugh Grant and Sarah Jessica Parker, who witness a murder and then enter a witness protection program,” explained Barosky. “They are re-located to Wyoming, where circumstances force them to stay together. We started filming in New York and later moved to Santa Fe, NM.”

After a very positive experience with his Lectrosonics UCR411A receivers, Barosky decided to upgrade his setup to the Lectrosonics Venue receiver system. “Working in NYC, the need for range and interference rejection is very important, and my new Venue Series receiver system offers the same high level of performance I came to expect from my UCR411A receivers,” explained Barosky. “In New York, you can have clear frequencies early in the day and those same frequencies can be jammed up later on. The ability to scan the frequency spectrum and rapidly change the frequency settings is a tremendously vital feature. When this sort of thing happens, you need to make frequency changes quickly—without holding up production or even letting anyone know you’re making changes. The Lectrosonics gear makes this process fast and easy.”

Barosky’s new Lectrosonics Venue receiver system is the VRM Narrow band model and it is fully stocked with six VRT tracking receiver modules. He continues to use his SM transmitters. Barosky discussed why he chose this particular setup. “This is a very compact system that enables me to have six channels in a single 19-inch rackspace,” he said. “Working primarily in New York City, I frequently find myself in tight quarters where I have to deal with multiple flights of stairs. Consequently, I’ve designed a sound cart that is quite small and light and the Lectrosonics Venue receiver system fits in beautifully.”

Lectrosonics’ sound quality is particularly appealing to Barosky. “While in Santa Fe, we were shooting a number of rodeo scenes where we were working with live bulls and horses,” Barosky said. “This prohibited us from using a cable run from my station to the boom operator. Hence, we ran everything wirelessly, including the boom, and I didn’t notice any difference in audio quality between the hardwired and the wireless boom. I believe Lectrosonics has the best sounding wireless systems available.”

Barosky is also very fond of the Lectrosonics RM remote control for the SM Series transmitters. “For this film, we were working with an actress who always wore very form fitting wardrobe,” notes Barosky. “Once we secured the SMa transmitter and microphone, it would have been extremely difficult to make changes to either level or frequency. By using the Lectrosonics RM remote, we were able to make those changes without having to disturb the wardrobe. This capability proved invaluable.”

In Barosky’s line of work, quality customer and technical support services are critical. Here, too, he finds much to like about Lectrosonics. “In my line of work,” says Barosky, “service is a big issue and Lectrosonics’ tech support has been great. The company is extremely responsive and turnaround times for repairs are fast. Howard Kauffman, the company’s East Coast representative, has also been a tremendous help by providing lots of useful information and advice on how to get the best possible performance from my wireless equipment. It all adds up to a very positive ownership experience. I would suggest that anyone looking for wireless performance and reliability take a good, hard look at Lectrosonics.”

For additional information about Michael Barosky, contact him via email at jazzbo(at)toast(dot)net.