AC/DC Rocks On With Lectrosonics 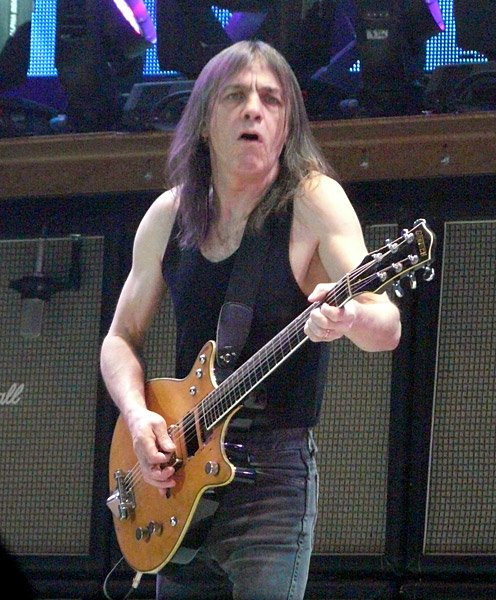 Rio Rancho, NM… With a rock n’ roll heritage that spans almost four decades and more than 200 million albums sold worldwide, AC/DC’s music is as unique as the individual members of the band. Formed in Sydney, Australia in 1973 by Malcolm and Angus Young, AC/DC is often referred to as one of the 100 Greatest Artists of Hard Rock and the Greatest Heavy Metal Band of All Time. The band recently introduced its first new album in over eight years, Black Ice, and is currently on tour in support of the album. No matter where the tour takes them, rhythm guitarist, backing vocalist, and co-songwriter Malcolm Young relies on a wireless setup to deliver the true sound of his guitars while providing the mobility to roam freely about the stage—and for this, he counts on Lectrosonics.

Geoff “Bison” Banks has been Malcolm Young’s guitar technician since 1990 and is charged with maintaining Young’s Gretsch guitars, Marshall Amplifiers and speaker cabinets, as well as other musical electronics used for the show. According to Banks, “Malcolm was using a wireless system, then went back to a cabled setup and stayed that way for quite some time as he didn’t like the fact that the wireless system changed the tone of his guitar. He plays a Gretsch Jet Firebird with Filtertron pickups, so he always wants a big sound—one that is mostly clean but with a little dirt on the chords. All the other wireless systems that we tried—and we’ve tried them all—colored his sound.”

When the band started rehearsals for the “Black Ice” World Tour in September (2008), Banks decided to give the wireless approach another try, as he explained. “Adam Day, the guitar tech for Neal Schon of Journey, showed me what he was using on tour with Journey, and it looked very impressive,” said Banks. “Immediately afterward, I contacted Larry Martin at North Hollywood, CA-based Tour Supply and made arrangements to get a Lectrosonics system.”

The new Lectrosonics system used by Malcolm Young includes two R400A Digital Hybrid Wireless™ diversity receivers, eight LMa Digital Hybrid UHF beltpack transmitters, and several MI39A guitar cables with right angle plugs. “Malcolm uses four Gretsch guitars during the show,” Banks explained, “and I have two LMa beltpacks assigned to each guitar. With each guitar, one R400A receiver and one of the two beltpacks serve as a backup system. We have separate beltpacks for each guitar, as the output from each instrument is very different.”

Tour Supply’s Larry Martin commented on the Lectrosonics transaction for AC/DC. “Lectrosonics equipment is widely recognized for its robust performance,” says Martin. “We been an authorized Lectrosonics equipment supplier for several years and, during that time, we’ve placed numerous systems with a number of high profile artists. We consistently hear positive feedback about the equipment, so we can recommend Lectrosonics with a high degree of confidence. When Geoff contacted me about a system for AC/DC, I had no reservations whatsoever about recommending the Lectrosonics gear. Geoff and I have a business relationship that dates back to the early 90’s, so he knows he can count on Tour Supply to steer him in the right direction.”

Banks reports that, unlike the numerous other wireless systems they tried previously, the Lectrosonics gear is the first such setup that doesn’t alter Young’s guitar sound. “Malcolm loves the transparent sound of the Lectrosonics system,” says Banks. “Finally, we a have a wireless system that doesn’t color his guitar sound and he’s free to move about the stage. I also love the fact that the equipment is easy to use. The SmartTune™ feature is great. It’s fast and always finds an open frequency—no matter where we are.”

Lectrosonics’ customer and technical support services also rank high with Banks. “They’re 110% great,” says Banks. “I’ve phoned the company a number of times and always got someone knowledgeable about the product to speak with me. Mind you, I never really had any issues with the equipment; it was basically just me being uncertain about what I was doing! On every occurrence, I got right through and got my questions answered.”

Before turning his attention back to the band’s business, Banks offered this closing thought. “This equipment is idiot proof,” Banks laughed. “It works every time! I’ve never seen or heard any wireless system like this. Lectrosonics quality is truly amazing.”

For more information about AC/DC, visit the band online at www.acdc.com.