Romeo And Juliet Get Wet With Lectrosonics

Actors in Central Park rendition find themselves “in deep water” 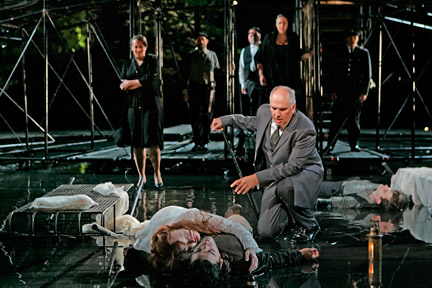 As anyone who works with electronic equipment knows all too well, moisture of any type can be the kiss of death. So you can image what must have run through the mind of Tom Clark of New York's Acme Sound Partners, LLC, whose firm provides theatrical sound design services for plays and musicals, when he discovered he needed to find a way to keep the actors' wireless gear working while being submerged in a pool of water during this summer's rendition of Romeo and Juliet in Central Park. To help him address this daunting challenge, Clark turned to Lectrosonics for the solution.

Performances of Romeo and Juliet ran June 6-July 8 at the Delacorte Theatre in Central Park and were free to the public. The set included a pool that, while only a few inches deep, was 30' in diameter. According to Clark, "With the frequent fighting and death that takes place during the performance, several of the principal actors found themselves on their backs or face-down in the water. For this reason, we needed to ensure that the wireless microphones were protected and capable of surviving this situation. That's when we discovered the Lectrosonics MM400c wireless transmitter."

The Lectrosonics MM400C water-resistant digital hybrid wireless miniature transmitter turned out to be the perfect tool for this unique application. Housed in a water-resistant, rugged, machined aluminum housing with a noncorrosive, highly durable finish and incorporating a waterproof power/mute switch, these extremely capable and small transmitters were placed in Ziploc plastic bags and attached to elastic belts, which were then placed around the actor's ribcage with the transmitter on their back. For some of the actresses, the wardrobe department worked with Clark and the other audio professionals on site to ensure optimal performance while remaining hidden within the costumes.

All in all, there were 22 wireless channels, with ten channels being assigned to Lectrosonics gear and the remaining channels to a competing manufacturer. Since the principals in the play were the ones who found themselves "in deep water," they were all equipped with the MM400C transmitters. Equipment for the production was supplied by Masque Sound, a well known provider of sound reinforcement solutions for the entertainment, sports, and convention industries.

The Lectrosonics Venue Modular Receiver System was deployed to acquire signal from the transmitters. The 1RU rackmountable Venue system is a modular UHF design that operates with Digital Hybrid Wireless transmitters and a variety of analog transmitters. It consists of a Venue Receiver Master (VRM) and one to six plug-in receiver modules. Hence, the entire 10-channel Lectrosonics wireless system occupied only two rackspaces in the equipment rack.

Reflecting on his experience with the Lectrosonics equipment, Clark offered the following thoughts. "Throughout the entire month Romeo and Juliet ran, not once did we encounter a single hiccup from any of the Lectrosonics equipment. I was very impressed by the audio and radio quality, the robustness, and cost benefits of the system. These transmitters were literally the only devices available anywhere that enabled the director's vision of this production to be realized. Additionally, Howard Kaufman, Lectrosonics' New York area sales representative, worked closely with us to ensure optimal system performance. The entire experience with both the company and the equipment was fantastic."