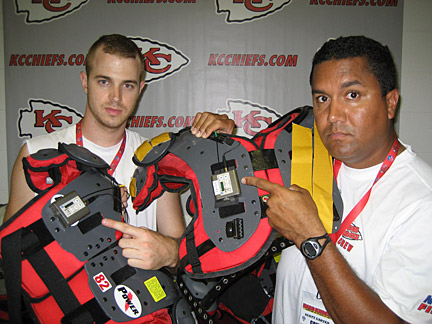 Mt. Laurel, NJ – September 2007… Few sports involve the rough and tumble body contact that NFL (National Football League) players endure on a daily basis. Capturing the on-field audio during the game is no small task—for both the equipment and the audio technicians responsible for making it happen. So when push comes to shove—as it routinely does during any football game—the audio techs at NFL Films look to Lectrosonics wireless equipment to get the job done.

In addition to their responsibilities for on-the-field action during televised games, NFL Films is a full service production and post production company that handles a wide variety of projects. Housed under a single roof, the company has their own camera and sound departments for location work, film processing labs, recording studios, on-staff composers, lighting directors, and everything else modern production requires. As one might expect, they also produce sports related programming, and in association with HBO Sports, they are currently in production on the show HARD KNOCKS: TRAINING CAMP WITH THE KANSAS CITY CHIEFS, which debuts in August. HARD KNOCKS will provide an all-access look at what it takes to make it in the National Football League.

According to Jerry Mahler, NFL Film’s Executive in Charge of Audio and Music, “NFL Films has been capturing on-field audio for quite some time, and over the years, we’ve encountered every type of failure you can imagine. We’ve worked with a lot of equipment, but nothing has the sound quality, durability, and reliability that Lectrosonics equipment offers. For the past several months, we’ve been using the Lectrosonics SMD transmitters with the RM remote control and they’ve been terrific.”

For capturing on-field audio, the transmitters are routinely placed into some recessed area of the player’s shoulder pads. Cable ties are used to secure the transmitter into place, and the unit is then covered with foot foam in order to ensure a lump-free installation. Additionally, a custom-made metal plate that covers the transmitter, antenna, and the microphone connections is placed over the system to provide additional protection. The mic cable is taped all along the back of the shoulder pads— concealed between the soft and hard shells.

“There can’t be any bulges,” said Mahler, “because that would only make the equipment more vulnerable, and player safety is of paramount concern. The opponent must not be able to grab the transmitter, as could possibly happen when a player is tackled by grabbing the collar. We also make certain the mic is facing down. This way, if a player gets doused with water, the capsule doesn’t get destroyed.”

Mahler reports that the dual battery found in the SMD transmitters, in conjunction with the system’s remote capabilities, work really well for this challenging application. “We typically get the shoulder pads 4-5 hours prior to game time,” states Mahler. “While we obtain the player’s approval, we get the shoulder pads from the team’s equipment manager and prepare the setup prior to the team’s arrival, so the added battery life of the SMD’s is very important. We’ve also been particularly impressed with the ability to remotely control the SMD’s with the available RM remote. Now, we can change audio input gain and frequency settings without having to bother the player. This is a real life saver. Because of the way the transmitter is placed into the shoulder pads, making these adjustments without the remote capability would be a serious hindrance. We first used the remotes during this year’s Super Bowl game, and they worked really well for us.”

As part of the RM remote’s capabilities, the system can also lock and unlock the transmitter’s front panel controls, and enable/disable sleep mode. Of particular note, the RM’s operation is acoustic—not infrared. Hence, a direct line of sight is not required.

Currently, NFL Films uses in excess of twenty systems. “As the person responsible for all audio in our company’s productions,” said Mahler, “sound quality and durability were my two most critical concerns for our wireless microphones. Not only do the SMD’s meet this requirement, their ability to be remotely controlled can save the day. Our SMD’s are mated with the Lectrosonics Venue receiver systems—both the VR and VR Field models—and we use the company’s LecNet2 software to configure the equipment. The company has always been very responsive, the gear performs well, and as a result, our overall experience has been extremely positive. You can’t ask for more than that.”