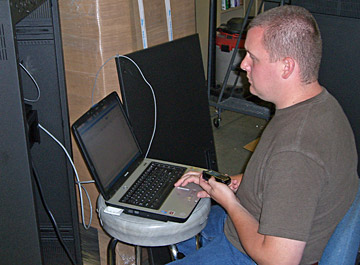 Briarcliff Manor, NY – August 2007… For their various meetings, achieving clean, distortion-free audio with proper balance among the microphones was a daunting task that always seemed to compromise business at the Briarcliff Town Hall. The facility, which serves both as a courthouse and a venue for reviewing village plans and related business, recently upgraded their audio capabilities. As part of the system overhaul, they are now using an automated mixing system from Lectrosonics.

Elmsford, NY-based Colortone Audio Visual, a diverse company that, in addition to its rental and staging division, is a design/build firm, handled Briarcliff Manor’s facility upgrade during May 2007. Among their numerous services, Colortone offers system integration and installation, videoconferencing, control system programming, and touch panel design.

According to Steve Esposito, Colortone A/V’s System Engineer/Project Manager who designed and managed the installation of the new system, “The Briarcliff Town Hall was struggling with a variety of factors that compromised their audio system’s performance. For starters, there was no permanent setup in the true sense of the word, and as a result, the facility A/V technician was setting up for every meeting—almost from scratch. This involved plugging various microphones into a console that was never really designed for this type of application. The system yielded mixed results at best, and the biggest challenges included distortion and inconsistent volume levels among the various persons who were speaking.”

Another issue that complicated matters for Briarcliff Manor was the fact that meetings are video recorded and broadcast via the community’s local cable access channel. Esposito’s job was to create a system that was easier to use, provided improved audio quality, and offered the ability to send multiple feeds to various types of equipment for recording, such as the camera that is used to capture the meeting activity. With its powerful digital audio processing, mixing, and routing capabilities, Esposito selected the Lectrosonics DM1612 Digital Automatic Matrix Mixer for the Briarcliff Town Hall.

“What really sets the DM Series mixers apart from the competition is their ease of use,” notes Esposito. “The mixer’s built-in equalization facilitates precise settings for each microphone, and the user interface is quite intuitive. Combined with its automatic digital feedback suppression, its signal routing capabilities, and the fact that the entire setup can be written into memory, the DM1612 made a great choice for this project. While the Town Hall is a small room and, hence, really only required one general purpose configuration, the setup— with twelve tabletop gooseneck microphones feeding the mixer—is now locked into memory, and this ensures proper performance for every meeting. Of equal importance, the system is easy to add on to for accommodating future expansion as their requirements evolve.”

Esposito was particularly impressed with the mixer’s routing flexibility. “Because they record every meeting,” said Esposito, “I assigned a pair of the DM1612’s sends to output mic level signal to the video camera. This way, the A/V tech can easily capture audio with the camera, and then feed both sound and picture to a personal computer via a single FireWire connection for editing. We also have the mixer outputting signal to multiple VCR decks for backup purposes.”

Before returning to his work, Esposito reflected on the installation and his experience with Lectrosonics. “The system’s overall performance is demonstrably better than before, and our client is very happy about both the sound quality and the ease of operating the equipment,” said Esposito. “We’re relatively new to Lectrosonics, but in the short time we’ve been working with the company, I’ve been impressed by both their products and the manner in which the company conducts its business. They’re very responsive and we have every intention of specifying Lectrosonics gear on future projects. They make the entire process easy.”

About Colortone Audio Visual
Founded in 1946, Colortone Audio Visual offers a wide range of services, including A/V for business events as well as full system design and integration capabilities. The company is noted for its ability to close out projects on-time, under-budget, and as per specification. For additional information, visit the company online at www.colortone-av.com.

About the Lectrosonics DM1612 Digital Automatic Matrix Mixer
Featuring 16 mic/line inputs and 12 outputs with a full DSP-based crosspoint matrix that enables every input to be routed to any or all outputs, the Lectrosonics DM1612 is a powerful digital audioprocessing, mixing, and routing system that makes an outstandingchoice for sound reinforcement and conferencing in a variety of applications with multiple microphones and loudspeakers . The ability to store up to 24 presets makes the DM1612 easy to program and use. represents a milestone in DSP technology in its basic architecture and in its processing speed and efficiency.