Lectrosonics On Location With Project Runway 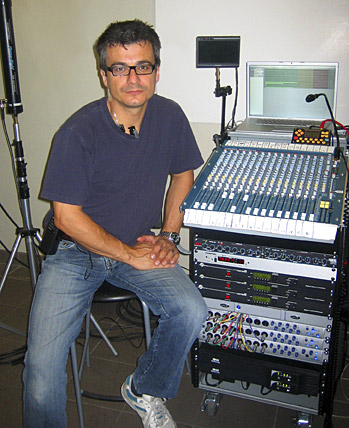 Toronto, Canada — July 2007… When it comes to capturing location sound for reality TV, there’s typically one chance to get it right, and that’s why having reliable, trouble-free wireless microphone equipment is so critical. For Mark Krupka, Head Sound Mixer for Project Runway—a reality television series that focuses on fashion design—getting the sound quality demanded for today’s highly competitive television market is not something taken lightly, and this is why he relies on his Lectrosonics equipment.

A professional audio veteran with better than twenty years of experience under his belt, Krupka worked his way from the recording studios to audio for television advertising and, from there, found his niche in reality TV. Among his many reality TV show credits is his work on producer Mark Burnett’s ever-popular Survivor.

“I really enjoy working on reality TV,” notes Krupka. “This type of work challenges everyone to expect the unexpected. It’s fast paced, and there’s absolutely no time for problematic equipment. Good gear and proper gear maintenance are vitally important to this type of work, as you only get one shot at it. I’ve worked episodes of Survivor where I was literally out in the pouring rain all day, and through it, my Lectrosonics gear proved to be very reliable. This is precisely why I use their equipment for my projects.”

On Project Runway, fashion designers compete with each other to create the best outfits and are restricted in their time, materials, and theme. Their designs are judged and one or more contestants are eliminated each week. The show is scheduled to begin airing in October 2007 on Canada’s Slice™ television channel, which offers viewers the very best in lifestyle television and is a property of Alliance Atlantis, one of Canada's most dynamic television broadcasters.

For his work on Project Runway, Krupka is using up to eighteen Lectrosonics SM transmitters and three Venue modular receiver racks—each fully stocked with six channels of the plug-in receiver modules. “I’m recording as many as 24 tracks of audio on this show and it’s all working beautifully,” states Krupka. “The fashion designers are the contestants on this show, so they, along with the host, judges, and special guests, are wearing the transmitters. The transmitters are placed on individuals in a variety of ways —depending upon the type of clothing they’re wearing. “I use waist bands, leg bands, ankle bands, and I also have clips for use on belts or a back pocket,” notes Krupka. “The nice thing about the SM’s is the fact that you can place them practically anywhere.”

In addition to the SM transmitters and Venue receivers, there are four to five ENG (electronic news gathering) crews, each equipped with Lectrosonics UCR411A Digital Hybrid Wireless™ compact receivers. The selectable user bits allow the sound mixers to quickly tune into any of the pre-programmed frequencies. This setup enables the cameras to capture the dialog, which serves as a guide track for the show’s editors. “By working this way,” explains Krupka, “the editors know exactly what’s being said at any given time, and this makes it easy for them to produce a rough cut and then replace the camera audio with the broadcast wave files (BWF) that I record.”

When discussing some of the challenges he encountered on Project Runway, Krupka went straight to the subject of RF interference. “We were recently shooting down the street from a television station, so I was a bit concerned about RF issues,” noted Krupka. “Lectrosonics’ scanning feature makes it very easy to identify open frequencies. You can see where the available [frequency] holes are and tune into them very quickly. This can be done on the fly, which for me, is important since staying on schedule in television is tough at the best of times, and I can’t afford to hold up production looking for interference free channels —not to mention that host, Somali born supermodel Iman does not like to be kept waiting either.”

Krupka was also quick to point out the benefit of adding the Lectrosonics ALP650 LPDA (Log Periodic Dipole Array) shark fin antenna into the setup. “I was concerned about dB loss as a result of long antenna runs,” said Krupka, “so I use the 650, which is an amplified antenna. It provides a very useful directional pattern over a broad frequency bandwidth and enables me to maintain good, strong signals. It’s been very effective on this project.”

When asked about his experience with Lectrosonics customer and technical support services, Krupka gave a positive response. “I’ve never actually required technical support,” says Krupka, “the gear is very straight forward and easy to operate. However, I periodically have my equipment serviced to ensure optimal performance, and in every case, the company has provided quality work with fast turnaround. They’ve been great to deal with.”

Before heading back to his work, Krupka took a few moments to reflect on his equipment. “Lectrosonics makes rock solid, bullet-proof gear. While I own most of the equipment I use, it’s nice to know that both the company and their local dealer—which for me is Trew Audio in Toronto—are always there to help me out should I find myself in a jam. Over the years, I’ve put my Lectrosonics equipment through the most demanding conditions, and it has functioned with great reliability. I have every intention of using this equipment for as long as possible.”