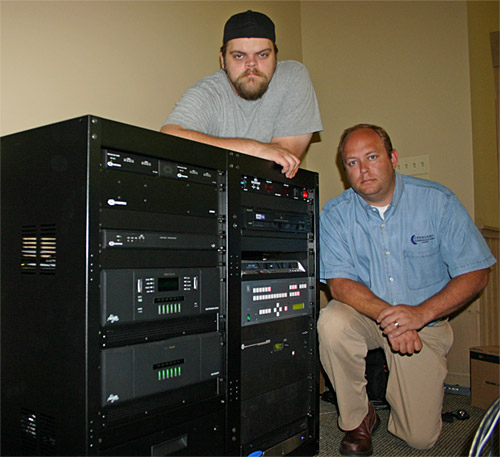 North Little Rock, AR… While audio levels that are too loud or too soft are always frustrating, nothing is more annoying than feedback—that howling and, often, high-pitched “screaming” that occurs when audio signals are looped back through the sound system. With this dreaded audio occurrence being the norm in their conference center, officials at the Arkansas National Guard’s Camp Robinson in North Little Rock, AR decided they’d had enough. Being at the end of their wits, they sought the expertise of Crescent Communications Corporation to resolve their audio issues—and central to the solution was the AM8 Automatic Microphone Mixer from Lectrosonics.

Headquartered in Kenner, LA, with satellite offices in Little Rock, AR and Memphis, TN, Crescent Communications is a video dealer and A/V systems integration company that handles a wide variety of projects. The design/build firm tackles everything from television studios for the broadcast sector through A/V systems for custom conference rooms as well as the church market. The task of restoring order to the sound system in the Little Rock TAG Conference Room at the National Guard’s Command Presentation Center was handed to the staff at Crescent Communications’ Little Rock office.

Prior to the Crescent Communications overhaul, the Little Rock TAG Conference Room originally had an old, manually operated analog mixer that handled the audio from the room’s four ceiling mounted condenser microphones along with the rest of their A/V devices, which included an input from their Tandberg 8000 video teleconferencing system. Problems arose because the Tandberg system’s boundary microphones didn’t “play” well with the overhead condenser mics, as Crescent Communications’ John Holland, system designer for the project, explained.

“The Tandberg system utilized its own very sensitive boundary mics for its audio,” said Holland, “but these microphones, combined with the four condenser mics, caused rampant feedback issues. To compensate for this situation, the amplified audio signal in the room had very little bass and, as a result, sounded tinny and weak. The problem was exacerbated by the nature of their manual mixer. When a presenter was unhappy with the room’s sound, they would fiddle with the mixer’s knobs and switches—usually to disastrous results.”

To address this unfortunate state of affairs, the Crescent Communications team, led by engineer Andy Simpson, installed a Lectrosonics AM8 Automatic Microphone Mixer. With the mixer’s NOM (number of open mics) attenuation circuitry that reduces the gain on unused microphones, combined with automated control via a Crestron CP2E control processor coupled with an STX-1700c wireless touch panel, the audio quality improved dramatically. According to Holland, “We selected the AM8 because it was ideally suited to accommodate the relatively small number of input sources and its NOM attenuation was a highly desirable feature given the previous feedback issues the client experienced. Unlike the previous system, we were now able to utilize all of the room’s microphones simultaneously—without losing quality or low end.”

“The mixer’s ability to be controlled by an automation system was another important factor,” continued Holland. “The client was very enthusiastic about this capability, given the problems that resulted from people changing the mixer settings without any knowledge of what they were doing. Now, with the preset levels on the AM8 and reinforced with commands from the Crestron, the client can walk into the conference room, turn the system on from the touch panel, and the audio settings will be consistent with the ones we programmed during installation. This arrangement also saves time because it makes the audio control in the room transparent to the presenter.”

According to Simpson, interfacing the AM8 with the Crestron automation system was quite straight forward. “We interfaced the AM8 to the Crestron using the DB9 to 3.5 mini LecNec adapter cable that was supplied with the mixer,” noted Simpson. “Since the Crestron limits its control to calls for presets, we defined all level settings, etc. right on the mixer. The Lectrosonics system was very easy to set up. Not once did we require technical support.”

With the Arkansas National Guard’s overhauled conference room system fully operational, Holland reports the results have been well-received. “The client is very happy with the system,” enthused Holland. “This project was our first experience with Lectrosonics LecNet automatic audio mixers, and it’s worked out well for everyone. We look forward to working with the company on future projects.”