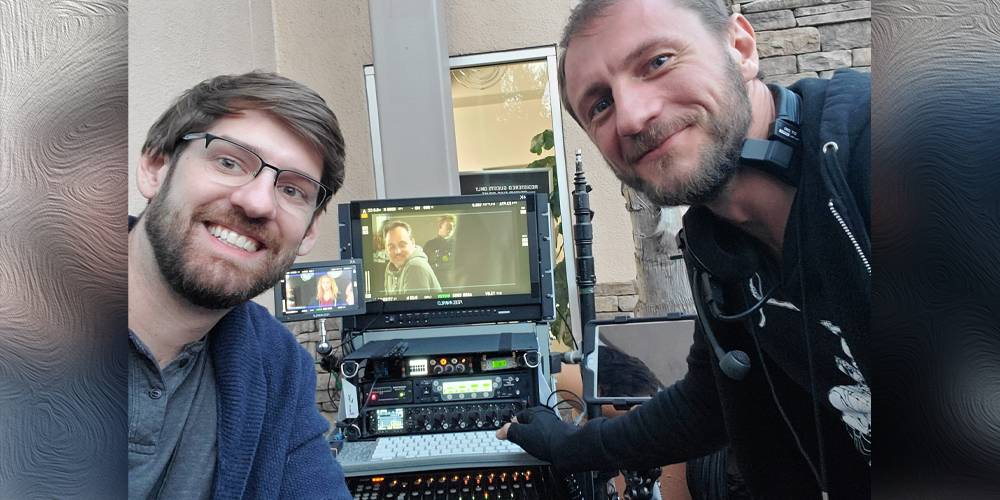 “A crucial quality is Lectro’s customer support. I fell in love with their solid products first and then their people. That’s all I need to be completely sold.”

Los Angeles, CA (July 14, 2020) — Production sound mixer Chris Polczinski has a broad palette of horror and thriller credits to his name, including the Eli Roth-produced Haunt, Better Start Running, The Art of Self-Defense, The Strangers: Prey at Night, and most recently The Big Ugly, starring the inimitable Ron Perlman. His audio cart includes just as wide a range of Lectrosonics Digital Hybrid Wireless gear. Belt-pack transmitters include the SMWB wideband, ultra-compact SSM, industry-standard SMV and SMQV, and UHF-band LMb, supplemented by an  HMa plug-on transmitter for use with boom mics. Receivers comprise a wideband-low version of the Venue modular system, SRb and SRc dual-channel slot-mount units as well as several UCR411a go-tos. Polczinski also just made the jump to Lectrosonics’ cutting-edge, all-digital D2 system, from which he uses the DSQD four-channel receiver and DBu belt-pack transmitters.

“After graduating Ohio University with a degree in post-production sound, I landed a promising job as a Foley artist,” says Polczinski. “But I wanted to stretch my legs and not be in the studio 12 hours a day, so I got into production sound after a referral about seven years ago. Being new, I felt I needed the best and most trusted gear to put producers at ease — and that was possible with equipment from brands like Lectrosonics and Sound Devices. I went to Location Sound to buy whatever my wallet would allow, which back then was a few UCR100 receivers and LMa transmitters. When I got a UCR411a, I finally felt like a real pro. The user interface was easy and the range was insane! Later, I upped my game with some SMVs, which are still the biggest workhorse in my rig.”

On shoots that involved hot weather and scant wardrobe, the micro size of the SSM has been more than just a convenience. “Being that small and wideband is a big deal,” notes Polczinski.

“On one film in Kentucky an actress was wearing next to nothing. My female boom operator grabbed the SSM and ushered her into the bathroom. When she came out and was ready for the take, everyone was like, ‘How did you mic her wearing that?’ She simply replied, ‘Don’t worry about it.’ Also, on Strangers we used a technique we named the ‘Bailee’ because we first used it on actress Bailee Madison, who for one scene wore a bare-midriff top so you couldn’t have a wire showing. You put the transmitter in a baby’s sock and she tucks it into the side of her bra, underneath her arm. It’s totally invisible, and you can’t pull this off with anything bigger than an SSM or SMV. This method is also social distance friendly because we don’t have to touch the talent — we just beep the transmitter with the LectroRM app and it’s on in less than four seconds.

“Lectro uses aluminum casings with scratch-resistant finishes,” he continues, “and durability is what I need when transmitters wind up in, let’s say, interesting places. They’ve been dropped, sweaty, overheated in direct sunlight, stepped on, and most recently, covered in gobs of hand sanitizer. Every time, they still worked perfectly.”

Lectrosonics’ nimble handling of frequencies has also made Polczinski’s job easier. “Spectrum availability is crucial to me given how much I travel and like to use lots of plant mics for scenes that require it,” he explains. “For example, on The Big Ugly, we had seven people delivering dialogue during a backwards-tracking Steadicam shot while gunshots, explosions, and squibs were in the mix. I had everyone miked, a wireless boom with an HMa plug-on following, a distant cardioid for ambient sound, and some dynamic mics as close in as I could get them. It was a lot of wireless channels and a lot of remote control of transmitters to fine-tune dialogue levels in relation to effects. The post department was delighted with what I gave them, and I couldn’t have done it without Lectrosonics transmitters and the LectroRM remote app.”

Ever-tightening spectrum availability is what prompted Polczinski to try Lectrosonics’ latest innovation, the D2 (D-Squared) system. Its transmitters take the next step beyond Digital Hybrid Wireless, transmitting the encoded audio in a purely digital format via 8PSK modulation. (And they also remain compatible with Digital Hybrid Wireless transmitters.) “Since I moved back to L.A., frequencies have gotten squished together a lot more,” Polczinski notes. “I purchased the DSQD to combat that, since it operates from 470 to 608MHz and can fit more functional wireless channels into a given bandwidth. It works flawlessly.”

And the DSQD paired with DBu transmitters far exceeded Polczinski’s expectations for both range and sonic performance. “I recently performed a range test with the DBu going into the DSQD,” he says. “It was in my wife Tasha’s front pocket, set at 50mW output power. When she got to 100 feet away, with our garage in the way, the RF meter on the DSQD was still at 100 percent. I’ve never had any other wireless setup I’ve used perform like this. She was halfway across the neighborhood before the RF meters fell into the yellow.”

Hardware performance is important, but Polczinski cites the people behind the brand as equally so. “A crucial quality is Lectro’s customer support,” he praises. “Every time I reach out to Karl [Winkler, VP of sales and marketing] or Gordon [Moore, company president], they respond promptly with detail and kindness. I don’t think I’ve had that experience with any other brand, either within the pro audio industry or outside of it. I fell in love with their solid products first and then their people. That’s all I need to be completely sold.”