Fifteen Years On The High Seas 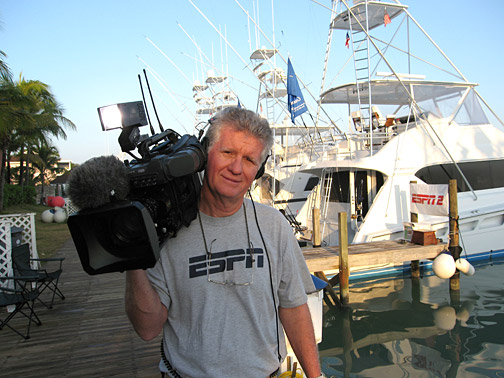 St Thomas, US Virgin Islands – May 2007… While most folks envision the US Virgin Islands as a place with bountiful servings of sun, fun, and lasting memories, the sand and saltwater of this lush environment can wreak havoc on electronic equipment—particularly if it goes on fishing expeditions. That’s precisely the type of activities that Frank Hurt, owner of Mountain Video Associates and producer and director for ESPN’s Billfishing Xtreme Release League, subjects his gear to on a regular basis. With his Lectrosonics M185 VHF Beltpack Transmitters, H185 VHF Plug-on Transmitters, and CR185 Compact Receivers running strong after 15-plus years of service, Hurt has little incentive to tamper with a good thing.

A 30-year veteran of the TV/video business, Hurt founded his company twenty-three years ago while living in Colorado. “The snow got the better of me,” jokes Hurt, “so I relocated the business to the Virgin Islands in 1984. In our early days, much of our work involved TV and commercial work in support of Caribbean tourism projects such as the cruise ship industry. Since much of the work in this area is centered around salt water sports activities like fishing and diving, the business continued to evolve.”

Presently in his third year as producer and director, Hurt has been with the popular ESPN sports program for seven years. Billfishing Xtreme Release League represents the highest level of professional competition a team can achieve in pursuing billfish. With nearly $2 million in cash at stake and fish that can range from 50 lbs. to over 1,000 lbs., experience and finesse on the skipper’s part is critical or the whole scenario breaks down. This sport is tough on everyone and everything involved with it!

Reflecting on his 15 years of wireless use, Hurt described the go anywhere, do anything type of activities that have endeared him to the Lectrosonics brand. “In the early 90’s,” recalled Hurt, “I was looking for wireless mics that were suitable for saltwater applications. Much to my surprise, there were none. At that time, the Lectrosonics M185, H185, and CR185 was the equipment to have, so I purchased two sets. While I’ve certainly had my share of experience with newer UHF systems from other makers that came out shortly afterward, my Lectrosonics VHF gear continues to perform very well. The 185 was and still is my everyday workhorse system for the really rugged treatment you encounter on sports shows.”

“This equipment goes everywhere with me,” continued Hurt. “In addition to boating expeditions, I’ve used my Lectrosonics system for work on Alaskan glaciers, I’ve done stand-up interviews in the Venezuelan heat, and my gear has seen me through countless projects in the humidity of Central America. I never hit the road without my Lectrosonics.”

In describing the bullet-proof Lectrosonics performance he has come to love, Hurt recalled a “takes a beating” equipment scenario that even surprised him. “I remember an occasion that involved two anglers standing at the transom (back of the boat) that were hooked up with two blue marlins,” said Hurt. “As is typical with this type of activity, the boat was backing up through some pretty rough seas at anywhere from 5 – 10 knots as they were pursuing the fish. At one point, the boat backed up into this giant 15-foot swell, and a massive amount of water rushed up over the anglers. When they re-appeared, they looked as though they had walked through a saltwater waterfall.”

My first reaction,” said Hurt, “was ‘That’s it— I’m on the shotgun mic for the rest of the day.’ Much to my surprise, the mics survived that ordeal, and I’m still using them! My Lectrosonics gear has been wet and dried-out so many times, I’ve lost count. This sort of abuse really speaks to the product’s reliability.”

When queried about his experience with Lectrosonics customer and technical support, Hurt offered the following, “In the 15 years I’ve had the equipment, only one set has gone in for repair. I called Lectrosonics, described the issue, and was instructed to ship the equipment back immediately. The service group made the repairs—along with some minor enhancements/upgrades —and returned the equipment within a week. Everything was done under warranty—with no questions asked and no charge. I was very impressed. We use seven cameramen shooting Billfishing Xtreme, and each owner/operator brings his own gear along for their part of the project. Through the years, I’ve seen all makes and models of wireless equipment, and because of the harsh conditions, I’ve seen many systems go down on the shoot, but I can’t remember a single Lectrosonics failure.”

Before heading out for yet another day on the water, Hurt shared this final thought, “Myself and an associate attended the NAB (National Association of Broadcasters) show a month or so ago. While visiting the Lectrosonics booth, we were looking over the company’s latest offerings. Since he was in the market for wireless equipment, I told him to choose his model wisely, because he’d be using this gear for a long time!”