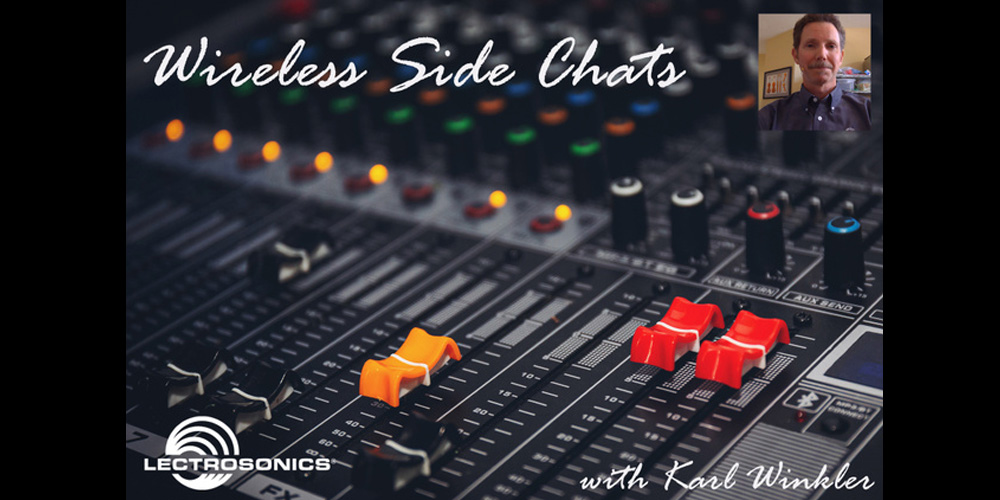 “We wanted to help every creative who uses wireless audio get better at their craft.”

Rio Rancho, NM (April 20, 2020) — Almost no modern film, television, or concert production can function without wireless audio. And while today’s best wireless equipment is easy to use and designed to keep the thornier technical issues out of the way, many gremlins lurk invisibly in the realm of the airwaves. The more users know about them, the better their end results will be. That’s why Lectrosonics has produced the new video series Wireless Side Chats, hosted by Vice President of Sales and Marketing Karl Winkler and available as a playlist on the company’s YouTube page.

Winkler, who earned degrees in stringed instrument performance and audio engineering, then embarked on a career in concert sound before joining Lectrosonics in 2004, explains vital topics in a straightforward style that’s highly approachable for audio beginners. At the same time, the videos are jam-packed with information that even the most seasoned production professionals will find valuable. Originally broadcast on Facebook Live, the Wireless Side Chats represent the ideal opportunity for everyone to enrich their wireless knowledge from the comfort of home. The term is a wordplay on “Fireside Chats,” the broadcasts of President Franklin D. Roosevelt during the Great Depression during the 1930s, which, appropriately, were a tipping point in the cultural importance of radio.

Four video episodes have been produced to date. Episode 1 covers the fascinating history of early wireless equipment, the wavelengths and tenants of the radio frequency spectrum, and how availability of frequency bands within that spectrum has changed over the past few decades. Episode 2 identifies the seven most common wireless microphone problems and how to solve them. Episode 3 is an in-depth clinic about Lectrosonics Wireless Designer software, which can manage every aspect of a multi-channel wireless system — from talent mics to on-set communications to monitoring — and can even integrate gear from other manufacturers. Episode 4 further explores best practices when using wireless: How to set up a “bag rig” for movie or TV shoots, advance frequency planning, how and when to use boosted antennas, signal loss inherent in cables and splitters, and much more.

“It was important for us not to have these videos just be an informercial for Lectrosonics,” says Karl Winkler. “We really wanted to help every creative and technical person who uses wireless audio get better at their craft. It’s my hope that everyone who watches this series will find something that does just that, whether they’re making an indie film for the first time, working in news, managing the audio department of a studio, running front-of-house concert sound, or anything else. If people have half the fun watching them that I did making them, we’ll have accomplished that goal!”